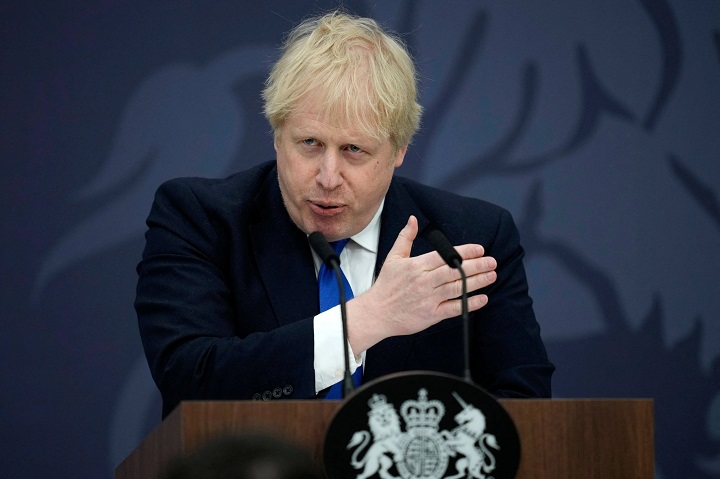 Headlines:
• Britain Plans to Send Migrants to Rwanda under Tougher Asylum Policy
• Pakistan to Seek Deepening of ‘Important’ Ties with US
• Pakistan to Name Miftah Ismail as Finance Chief before IMF Talks

Britain could send tens of thousands of asylum seekers to the East African country of Rwanda, Prime Minister Boris Johnson said on Thursday, aiming to break people-smuggling networks and stem the flow of migrants across the Channel. Concerns over immigration were a big factor in the 2016 Brexit vote, and Johnson has been under pressure to deliver on his promise to “take back control” of Britain’s borders. But his plan drew swift criticism from opponents of his Conservative Party and from charities. “We must ensure that the only route to asylum in the UK is a safe and legal one,” Johnson said in a speech in Kent, southeast England, where thousands of migrants in small boats landed on Channel beaches last year. “Those who try to jump the queue or abuse our systems will find no automatic path to set them up in our country, but rather be swiftly and humanely removed to a safe third country or their country of origin.” Anyone who has arrived in Britain illegally since Jan. 1 could now be relocated to Rwanda, which would disrupt the business model of people-smuggling gangs, the prime minister said. “The deal we have done is uncapped and Rwanda will have the capacity to resettle tens of thousands of people in the years ahead,” he said. The plan drew strong criticism from opposition parties, with interior minister Priti Patel’s Labour Party counterpart, Yvette Cooper, saying it was costly, “unworkable and unethical”. The U.N. refugee agency (UNHCR) also voiced opposition. “People fleeing war, conflict and persecution deserve compassion and empathy. They should not be traded like commodities and transferred abroad for processing,” said UNHCR’s Assistant High Commissioner for Protection, Gillian Triggs. Concerns were also raised about Rwanda’s human rights record, which the British government itself noted last year. Johnson said Rwanda, where in 1994 Hutu extremists killed more than 800,000 Tutsis and moderate Hutus, was “one of the safest countries in the world”, adding however that the risk of ending up in the country would prove a “considerable deterrent” over time. Human Rights Watch said Rwanda did not respect some of the most fundamental human rights. “Refugees have been abused in Rwanda and the government has, at times, kidnapped Rwandan refugees outside the country to bring them home to face trial and ill-treatment,” said Lewis Mudge, HRW’s Central Africa director. [Source: Reuters]

Britain a country that prides itself on human rights trounces its own values to export asylum seekers to Rwanda. Johnson’s government is prepared to sacrifice its cherished ideals so that it can appeal to its indigenous racist electorate to win local elections in key battle ground constituencies.

Pakistan to Seek Deepening of ‘Important’ Ties With US

Pakistan’s new government said Tuesday it would “constructively and positively” engage with the United States to promote “shared goals” of regional peace, security and development. The Pakistan parliament elected Shehbaz Sharif as the country’s new prime minister on Monday after a no-confidence vote ousted incumbent Prime Minister Imran Khan, ending his nearly 4-year-old coalition government. “We welcome U.S. reaffirmation of long-standing ties with Pakistan,” Sharif’s office said in response to remarks by White House press secretary Jen Psaki on Monday in which she underscored the criticality of Washington’s ties with Islamabad regardless of its leader. “We look forward to deepening this important relationship on the principles of equality, mutual interest and mutual benefit,” the Pakistani statement said. On Monday, Psaki said the Biden administration supported the “peaceful upholding of constitutional democratic principles” and does not support one political party over another in Pakistan. “We value our long-standing cooperation with Pakistan, have always viewed a prosperous and democratic Pakistan as critical to U.S. interests,” she said. Psaki said the “long, strong and abiding” relations will continue under new leaders in Islamabad. She declined to say whether Biden had any immediate plans to speak to Sharif. Islamabad’s traditionally tumultuous relationship with Washington suffered setbacks under Khan, who took power in 2018 as the head of a coalition government with a thin majority in parliament. Throughout his nearly four years in office, Khan relentlessly criticized Washington for what he said was a flawed war in neighboring Afghanistan, which ended last August. In the weeks leading up to his ouster, Khan repeatedly alleged the U.S. had colluded with his political opponents to topple his government to punish him for moving Pakistan closer to China, and Russia in particular. Washington has rejected the allegations, and so has the Pakistani opposition. [Source: Voice of America]

After the dismissal of one American agent, another one ascends to serve US interests. Despite Khan’s vocal stand against the US, he diligently implemented US policy regarding Afghanistan, Kashmir, India and also surrendered Pakistan’s domestic economy to the IMF. Shehbaz Sharif will further subdue the Pakistani people to greater US interference.

Pakistan’s new government is said to have selected a close ally of Prime Minister Shehbaz Sharif and his family as the new finance chief ahead of crucial talks with the International Monetary Fund, according to two people familiar with the matter. Miftah Ismail has been an economic aide to three-time premier Nawaz Sharif, who is the older brother of the new prime minister. Ismail is likely to be named along with the rest of the cabinet within 24 hours, said one of the people. The government, formed through an alliance of several political parties that voted out former cricket star Imran Khan, is still in talks to distribute portfolios and a final decision is yet to be made, the people said. He will lead an economic team that also has to deal with Asia’s second-fastest inflation and falling foreign exchange reserves that have dropped to levels that can fund just a couple of months of imports. The nation’s central bank has already increased interest rates by the most since 1996 to help ease the crisis. Ismail declined to comment on his potential appointment, while ruling party spokeswoman Marriyum Aurangzeb and the Prime Minister’s Office didn’t immediately respond to requests for comment. Ismail also held a press conference on Tuesday, hastily called by the Finance Ministry. He told reporters that inflation couldn’t be immediately controlled because of the “flawed policies” of the Khan government. The first thing to do was to negotiate with the IMF and convince them to ease the tough conditions so that the government could provide relief to the people, he said. For now, the government hadn’t decided whether to raise fuel prices, Ismail said, which is a key condition for IMF loans. Pakistan is under pressure roll back subsidies given to energy prices that would increase electricity and gasoline costs. It will also have to keep a lid on excessive revenue spending that is typically seen in the run-up to elections in South Asia until the IMF program ends in September and there’s speculation polls may happen sooner than later. [Source: Bloomberg Qunit]

Once again a new Pakistani government is preparing to negotiate with the IMF on how to borrow more money in return for painful medicine that has never worked in Pakistan’s history. This blind obedience to the IMF just goes to show how Pakistan’s political class irrespective of ideological orientation is enamored by Western solutions.