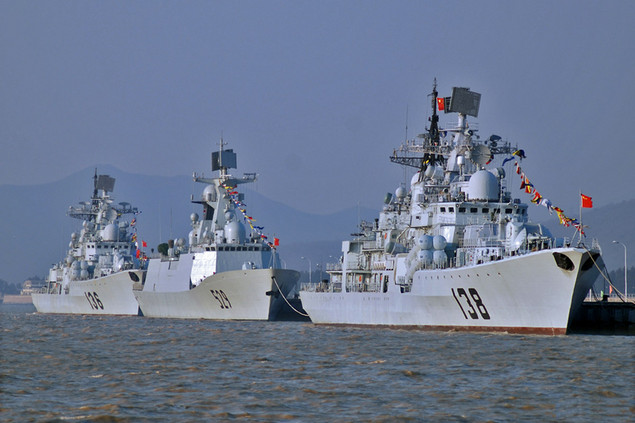 Almost ten years after President Obama’s pivot to Asia, tensions between America and China are at a peak. According to an Associated Press report in the Los Angeles Times:

For the first time in nearly three years, three American aircraft carriers are patrolling Indo-Pacific waters, a massive show of naval force in a region roiled by spiking tensions between the U.S. and China and a sign that the Navy has bounced back from setbacks dealt by the coronavirus outbreak.

The unusual simultaneous appearance of the three U.S. warships, accompanied by Navy cruisers, destroyers, fighter jets and other aircraft, comes as Washington escalates criticism of Beijing’s response to the coronavirus outbreak, its moves to impose greater control over Hong Kong and its campaign to militarize artificial islands in the South China Sea…

“The ability to be present in a strong way is part of the competition. And as I always tell my guys here, you’ve got to be present to win when you’re competing,” said Rear Adm. Stephen Koehler, director of operations at Indo-Pacific Command. “Carriers and carrier strike groups writ large are phenomenal symbols of American naval power. I really am pretty fired up that we’ve got three of them at the moment”…

This is “the new normal,” said Koehler. He said that while it’s not likely there will be three carrier strike groups consistently in the Pacific over the long term, “it’s something we can do when we want to.”

The grand strategic conflict between China and America presents an ideal opportunity for the Muslim Ummah to retake control of its own affairs and eject the agent ruling class that governs it on behalf of the West. All the elements are in place for success, it requires only the will and determination of the Ummah to carry it out.

Syrian and Lebanese Economic Collapse Demonstrates Why Revolution is Essential

A town in regime-controlled Syria is set for fresh protests this weekend as a burgeoning economic crisis engulfing even Bashar al-Assad’s most loyal supporters is now posing the biggest challenge to his grip on the country in years.

Food is now more expensive than at any other time during the nine-year conflict, triggering scenes reminiscent of the Arab Spring protests of 2011 on the streets of the nominally government-loyal town of Sweida this week.

“We don’t want to live, we want to die in dignity,” and “He who starves his people is a traitor,” protesters chanted as they marched for consecutive days in the southern city, calling for the president’s downfall. Another march is scheduled for Saturday.

Assad is currently struggling on multiple fronts, including the threat of the coronavirus, a feud with Syria’s richest man, his cousin Rami Makhlouf, and balancing the divergent interests of his backers in Moscow and Tehran.

The president’s biggest problem by far, however, is the financial turmoil next door in Lebanon, which has helped send the Syrian economy into meltdown. New US sanctions against his regime that come into force next week could be potentially devastating.

The unstable economic system bequeathed by Western Capitalism can never provide consistent long-term prosperity. Instead of calming and healing economic problems, the Capitalist system aggravates and intensifies them. This is because Capitalist economics is built of freedom of ownership which enables a small elite to capture most of society’s wealth and resources, while being unable to generate sufficient economic activity for all of society to prosper. Muslims will not be able to solve their economic problems until they reject the Capitalist economic system and replace it with the implementation of the Islamic Shar’a under the rule of a righteous Khalifah (Caliph).

Following the first strategic dialogue session between Iraq and the United States in Baghdad on June 11, the two delegations issued a joint statement reflecting the decisions reached in the first round of talks. The statement reaffirmed the Strategic Framework Agreement signed in 2008, as well as other documents between the two countries, in particular two letters from Iraq to the UN Security Council in June and September 2014 calling on the international community to provide Iraq support in its fight against terrorist groups.

Politically, Washington reaffirmed respect for “Iraq’s sovereignty, territorial integrity, and relevant decisions of the Iraqi legislative and executive authorities.” The United States also expressed support for the new Iraqi government and its reform plan and its commitment to organize early elections.  Humanitarian issues — including respecting human rights and “the return and reintegration of displaced people” — were also highlighted.

As a political crisis has been plaguing Iraq in recent months, Iraqi political forces — even pro-Iran groups — have been sending positive signals toward the United States, calling for help to overcome the predicament. Speaking after parliament approved new Prime Minister Mustafa al-Kadhimi in May, the head of the Popular Mobilization Units’ (PMU) Fatah parliamentary bloc, Muhammad al-Ghabban, said, “Washington should demonstrate its interest in Iraq by giving priority to supporting Iraq at this critical stage, and assure the Iraqi people of its seriousness in providing assistance to them, and not siding with any Iraqi political party against another.”

In the security realm, Iraq has committed to providing protection to US-led coalition forces operating on Iraqi territory. On the other side, the United States reiterated that it is not seeking permanent bases in Iraq. Instead, Washington is planning to continue reducing the number of forces in the country over the next few months, and will discuss the status of the remaining forces with Baghdad.

America practices in Iraq the standard Western imperial tactic of installing a puppet government to legitimise the activities of the foreign power. They do this not only to justify themselves in front of the world but more importantly to deny the claims of rival Western imperial powers, as Western countries are engaged in a bitter rivalry and competition for the wealth and resources of the world. America most certainly wants to reduce its bases in Iraq, as in Afghanistan, because it wants its puppet regimes to do their own domestic police work, leaving American military forces free to project power within the wider region. America maintains almost a thousand bases around the world as part of a global military empire in order to ensure its status as the world’s leading power. With Allah’s permission, Muslims shall soon re-establish the righteous Islamic Khilafah (Caliphate) State on the method of the Prophet ﷺ that shall mark the rise of a new power in global affairs, spreading the light of Islam throughout the world. Allah (swt) says in the Noble Qur’an: وَمِنَ الَّذِينَ قَالُواْ إِنَّا نَصَارَى أَخَذْنَا مِيثَاقَهُمْ فَنَسُواْ حَظًّا مِّمَّا ذُكِّرُواْ بِهِ فَأَغْرَيْنَا بَيْنَهُمُ الْعَدَاوَةَ وَالْبَغْضَاء إِلَى يَوْمِ الْقِيَامَةِ وَسَوْفَ يُنَبِّئُهُمُ اللّهُ بِمَا كَانُواْ يَصْنَعُونَ * يَا أَهْلَ الْكِتَابِ قَدْ جَاءكُمْ رَسُولُنَا يُبَيِّنُ لَكُمْ كَثِيرًا مِّمَّا كُنتُمْ تُخْفُونَ مِنَ الْكِتَابِ وَيَعْفُو عَن كَثِيرٍ قَدْ جَاءكُم مِّنَ اللّهِ نُورٌ وَكِتَابٌ مُّبِينٌ * يَهْدِي بِهِ اللّهُ مَنِ اتَّبَعَ رِضْوَانَهُ سُبُلَ السَّلاَمِ وَيُخْرِجُهُم مِّنِ الظُّلُمَاتِ إِلَى النُّورِ بِإِذْنِهِ وَيَهْدِيهِمْ إِلَى صِرَاطٍ مُّسْتَقِيمٍ “And from those who say, “We are Christians” We took their covenant; but they forgot a portion of that of which they were reminded. So We caused among them animosity and hatred until the Day of Resurrection. And Allah is going to inform them about what they used to do. O People of the Scripture, there has come to you Our Messenger making clear to you much of what you used to conceal of the Scripture and overlooking much. There has come to you from Allah a light and a clear Book. By which Allah guides those who pursue His pleasure to the ways of peace and brings them out from darknesses into the light, by His permission, and guides them to a straight path.” [al-Maida: 14-16]