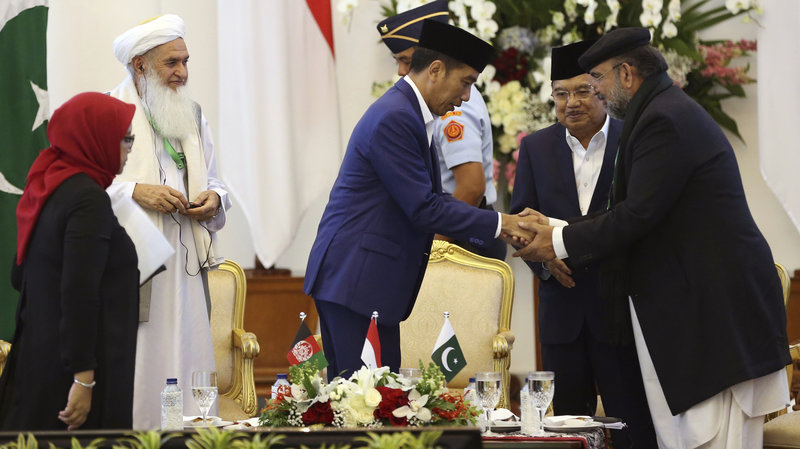 US and Jewish entity Coordinate to Evict Iran from Syria

“The White House is condemning Iran’s “reckless actions,” accusing the country of “exporting destabilizing influence throughout the Middle East.”

White House spokeswoman Sarah Huckabee Sanders has issued a statement citing actions in Syria and Saudi Arabia. She is calling on “responsible nations” to pressure Iran to “change this dangerous behavior.”

An Iranian rocket barrage on Israeli positions in the Golan Heights prompted an Israel attack Thursday on Iranian targets in Syria. Saudi Arabia is accusing Iran of providing missiles that Yemeni rebels have fired toward Riyadh.

Downing Street also said May reiterated support for the Iran nuclear deal, which Trump withdrew from this week.”

But contrary to what the Americans are saying, the Iranian leadership has only made every effort to support Western objectives in the Middle East, as Iranian President Rouhani earlier complained to Merkel after the US withdrawal from the Iran nuclear deal, according to Press TV:

“Determined to achieve and maintain regional stability and security, Iran has always tried to de-escalate tensions in the region and under no condition does it welcome more tensions,” Rouhani told the German leader in a phone conversation on Thursday.

Citing Iran’s military advisory role in Iraq and Syria as examples, the Iranian head of state said even Europe has benefited from the Islamic Republic’s successful anti-terror efforts.

“The battle that Iran and the people of Iraq and Syria fought against Daesh terrorists has brought relatively good levels of security to Syria and Iraq, and has benefitted the region and the world, including Europe,” he asserted.”

In fact Iran’s mistake is to think that it could also benefit from its services to the West in Iraq and Syria. However, now that America considers Iran’s work to be complete, America is kicking the Iranian forces out of the region. Iran’s present fate is just one more example of how serving the foreign disbelievers brings nothing but humiliation in this world, although the punishment in the hereafter is far worse than this.

“Muslim scholars from three countries issued an edict Friday saying that violent extremism and terrorism, including suicide attacks, are against Islamic principles, in an effort to convince the Taliban to end its violence.

Seventy prominent Muslim scholars from Afghanistan, Pakistan and Indonesia issued the fatwa, or edict, at a conference in Indonesia on ways to achieve peace and stability in Afghanistan.

Jokowi said the conference was part of Indonesia’s efforts to encourage the role of Islamic clerics, or ulema, in promoting peace in Afghanistan.

“Through the voice of ulema, mainly from Afghanistan, Pakistan and Indonesia, presumably the spirit of brotherhood for peace in Afghanistan can be strengthened,” Jokowi said.

“Ulema are the agent of peace … they have the power to form the face of peaceful people,” Jokowi said.”

Muslims have seen many such government-sponsored fatawa before, which copy-paste the Ahkaam related to one subject on a situation that requires an entirely different set of Ahkaam. Genuine fatawa always begin from a detailed discussion of the situation before turning to see which rules apply to it. Obviously, Islam permits neither violence nor suicide to disrupt peaceful society, whether that society is Dar al-Islam or even Dar al-Kufr. But the situation in countries like Afghanistan is one of foreign occupation supported by a token agent regime. This situation requires the rules of jihad to be applied to it and not the rules of living in peaceful society. What is fighting in war except a type of suicide, where one sacrifices one’s life for a higher purpose?  By focusing on Muslims’ revulsion to suicide, agent government regimes hope to turn Muslims against jihad as a whole. But, with Allah’s permission, they are too late, as Muslims have already begun their return to their Deen, re-embracing ‘forgotten’ Ahkaam such as jihad and re-establishing the Khilafah.

Malaysian authorities barred ousted Prime Minister Najib Razak and his wife from leaving the country on Saturday, amid reports that the government was reopening investigations into a multi-billion-dollar graft scandal at a state fund he founded.

The order by immigration authorities came minutes after Najib said in a Facebook post that he and his wife, Rosmah Mansor, were taking a week-long holiday overseas to rest after his thumping defeat in Wednesday’s general election.

The Malaysian system of justice, like those in other former British colonies, is based on the English common law system. This system, whether in Britain or abroad, is designed not to dispense justice but to preserve the power and stability of the rulers. At its basic level it functions as a type of arbitration and conflict resolution where settlements are made between opposing parties rather than true justice dispensed for crimes committed.

The Malaysian judiciary fully cooperated with Prime Minister Najib Razak in burying the ‘1MDB’ case despite obvious evidence of corruption. However, as soon as he is out of power, the same system has begun turning against him by barring him from leaving the country and raising discussion of reopening investigations.

The same is the case with former opposition leader Anwar Ibrahim who has been in prison since 2015 and is now expected to be fully pardoned after his party won. Newly elected Prime Minister Mahathir Mohamad said, also according to Reuters:

Malaysian Prime Minister Mahathir Mohamad said on Friday the country’s monarch had indicated he was willing to grant a full pardon to jailed politician Anwar Ibrahim.

Muslims must return to the divine law, the Islamic Shar’iah for their justice and reject the so-called justice of the foreign disbeliever. Only in Islam was ruling ever truly subservient to law. With Allah’s permission, the world will soon see the re-established Islamic Khilafah (Caliphate) State on the method of the Prophet ﷺ that will manifest again true justice for mankind.