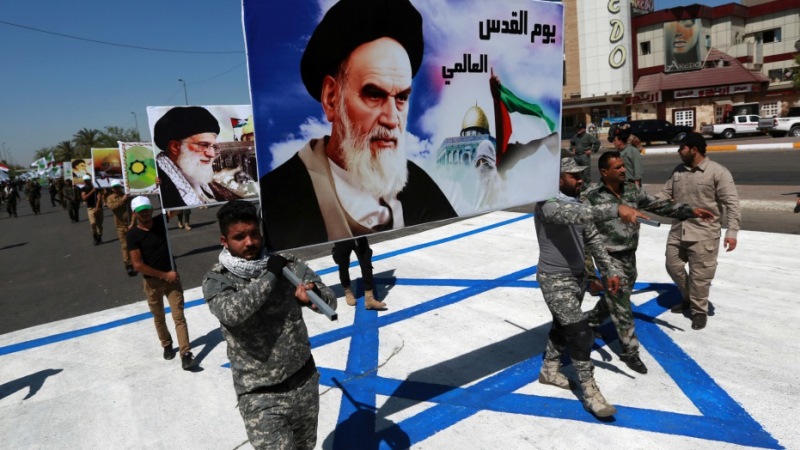 Jewish entity and Iran on brink of war

The Jewish entity has launched its most intensive attack on Iranian positions in neighbouring Syria since the civil war began in 2011, bringing two of the region’s major powers closer to the brink of direct confrontation than ever before. The early morning bombardment killed 23 people, the UK-based Syrian Observatory for Human Rights (SOHR) said. It was issued in response to what the Jewish entity’s Defence Forces (IDF) said was the first ever Iranian rocket attack on its troops, in the Golan Heights. The confrontation marks the most significant military skirmish between the two enemies to date amid a backdrop of escalating regional tensions.  Jewish Prime Minister Benjamin Netanyahu claimed Iran “crossed a red line” and the Jewish response using airstrikes was “appropriate”. The actions were a “clear message” to Syrian President Bashar al-Assad, he said, adding: “We are in the midst of a protracted battle and our policy is clear: We will not allow Iran to entrench itself militarily in Syria.” Iranian president Hassan Rouhani meanwhile urged European nations to “clearly state their actions and stances to compensate for the withdrawal of the United States in the short time that is left”. “Iran has always sought to reduce tensions in the region, trying to strengthen security and stability,” he told German chancellor Angela Merkel in a phone call, one of number he made to a series of world leaders throughout the day. Theresa May and French president Emmanuel Macron have both called for “calm on all sides”. The White House condemned what it said was Iran’s “provocative rocket attacks from Syria against Israeli citizens”, emphasising “Israel’s right to act in self-defence.” Russia also called the strikes an “alarming development” and urged for a de-escalation. During the overnight incident civilians in both the Golan Heights, the Damascus countryside and Syria’s south were kept awake by the sound of low-flying military jets and explosions. The Jewish entity has been on heightened alert in recent days in anticipation of an Iranian attack: Tehran has vowed retaliation for two other recent Jewish strikes in Syria which targeted and killed at least 13 Iranian nationals.  [Source: The Independent].

Oil prices look set to temporarily hit $90 a barrel during the first half of next year, if not sooner, and risk spiking to as much as $100 a barrel, depending on geopolitical events and other factors, say Bank of America Merrill Lynch analysts. But they do not see an immediate major jump in prices. For this year, they forecast an average price of $70 a barrel for Brent crude, the international benchmark. They forecast $75 for next year. Their previous forecast was $60. Prices could climb significantly next year, however. The analysts have a target of $90 a barrel during the second quarter of 2019, with a risk it could go to $100 a barrel. Futures on Brent were trading as high as $78 Thursday. “Looking into the next 18 months, we expect global oil supply and demand balances to tighten driven by the ongoing collapse in Venezuelan output. In addition, there are downside risks to Iranian crude oil exports. Plus we see a high likelihood of OPEC working with Russia in 2019 to set a floor on oil prices,” they wrote. The report says OPEC and Russia could gradually reduce the amount of oil they are holding off the market by 450,000 barrels a day next year. But if they do not step back from their current agreement to withhold 1.8 million barrels a day, the market will get tighter and prices will be higher. They also expect Venezuela’s output to drop by 500,000 barrels a day over the next 20 months, but they did not include a major drop in Iranian exports in their forecast. If a new nuclear deal is not reached within six months, global oil markets could tighten further. They factored in Iran’s current production of about 3.8 million barrels a day. As for the U.S., they forecast West Texas Intermediate crude prices will be about $5 below Brent this year and $6 below next year, due to bottlenecks in transporting shale crude to market and because of capital constraints at drillers. WTI was trading just above $71 a barrel on Thursday. World oil consumption should grow by 1.5 million barrels a day this year and 1.4 million barrels a day next year. [Source: CNBC News].

There is no apparent reason for the oil price to spike so dramatically, as the oil demand and supply equation is relatively stable despite some issues. The speculators are at it again, feeding on market sentiments and maybe scenarios to hike the price of oil.

Pakistan to Impose Reciprocal Restrictions on US Diplomats

Pakistan is considering imposing reciprocal restrictions on US diplomats after Washington announced that it would impose travel restrictions on Pakistani diplomats starting from Friday, the media reported. The authorities are planning to enforce restrictions on American diplomats posted in Islamabad, Lahore, and Karachi, Dawn News reported. They are already prohibited from visiting high-security areas, such as the Federally Administered Tribal Areas (FATA), to protect them against possible terrorist attacks. It was reported last month that Pakistani diplomats would be restricted from travelling more than 40 km from the embassy in Washington or consulates in other cities without permission. US Congressman Donald Norcross, a New Jersey Democrat said: “The important thing is to have dialogue. And if (by imposing those restrictions) we are inhibiting conversation, I do not think that’s a smart thing to do. On Thursday, Pakistan’s Ambassador to the US Aizaz Chaudhry told the Voice of America: “In my opinion, this is not the right decision.” Pakistan’s Foreign Ministry has called it a matter of reciprocity because most foreign diplomats, including Americans, face travel restrictions in Pakistan because of security concerns. [Source: Khaleej Times]

Imposing travel restrictions on US diplomats will not deter America from executing its nefarious plans to undermine Pakistan’s territorial integrity. On the Khilafah Rashida (Caliphate) can end America’s hegemony in Pakistan and return stability to Pakistan, as well as the Muslim world.