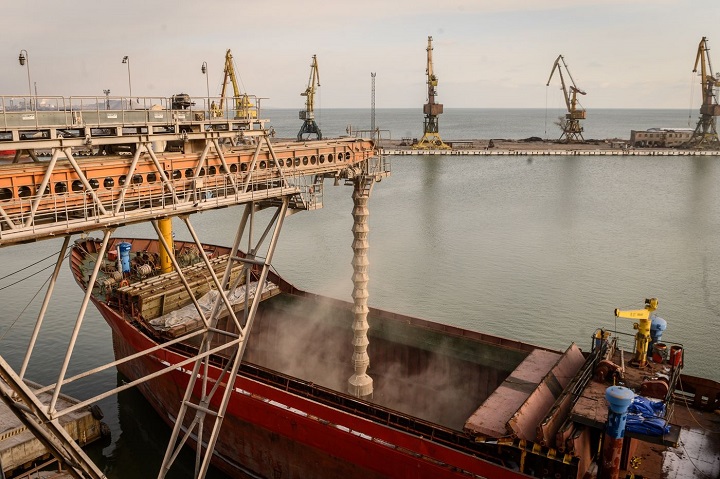 In a wide-ranging interview with Sky News, Dmitry Peskov denied atrocities had taken place, said NATO was confrontational, accused Boris Johnson of not being “constructive” and said Russia is trying to bring the war to an end soon. Vladimir Putin’s spokesman has admitted a “significant” loss of Russian troops since the invasion of Ukraine began, telling Sky News their deaths are a “tragedy”. Dmitry Peskov, in his first broadcast interview with Western media, also said Russia hopes “this operation” will reach its goals “in the coming days”. He told Sky News’ Mark Austin that “we’re living in days of fakes and lies” and verified photos and satellite images of dead civilians in the streets of Ukrainian cities were a “bold fake”. “We deny the Russian military can have something in common with these atrocities and that dead bodies were shown on the streets of Bucha,” he told Sky News. He maintained the whole situation in Bucha, where photos show many murdered Ukrainian civilians, was a “well-staged insinuation, nothing else.” Asked to reveal how many civilians have died since the war began on 24 February, Mr Peskov said he did not want to answer as the numbers were not “double confirmed”. Mr Peskov continued to insist it was not a war but a “special military operation” that was necessary because, he said, Ukraine has been an “anti-Russian centre” since 2014, when Russia annexed Crimea. However he did admit: “We have significant losses of troops and it’s a huge tragedy for us.”And in the first hint the Kremlin wants to see an end to the war – although in what form is unknown – he said: “Our military are doing their best to bring an end to that operation. “And we do hope that in coming days, in the foreseeable future, this operation will reach its goals or will finish it by the negotiations between Russian and Ukrainian delegation.” [Sky News]

Russia is not the only country that has committed war crimes. The West has blood on its hands in almost every part of the world, especially the Muslim world. Equally, China, India, Burma, and the Jewish state continue to commit war crimes against Muslims with impunity. Where is the justice?

Global food prices rose to their highest ever levels in March as a result of Russia’s invasion of Ukraine, the UN has reported. Cooking oils, cereals and meats hit all-time highs and meant food commodities cost a third more than the same time last year, according to the Food and Agriculture Organization’s monthly food price index published on Friday. The Russia-Ukraine war has disrupted Black Sea exports of crucial commodities from a region that had been producing more than a quarter of the world’s wheat exports. The war has helped push cereal prices up 17% over the past month with the closure of ports throttling wheat and maize exports from Ukraine. Russian exports have also been slowed by financial and shipping problems. World wheat prices soared by 19.7% during March, while maize prices posted a 19.1% month-on-month increase, hitting a record high along with those of barley and sorghum. The FAO said these problems were likely to persist, leading to higher prices, lower stocks and uncertainty in the wheat market in the future. “The higher price quotations are particularly concerning for countries already struggling with other crisis, including conflict, natural disasters, economic conditions or, as it is often the case, some combinations of those,” said an FAO spokesperson, adding that countries with low incomes and food shortages may struggle to pay higher prices. “[Price] increases are the most noticeable in the countries where the share in disposable income spent on food is the highest. In these cases, the most vulnerable are likely to skip meals, purchase less nutritious foods, or use other coping strategies, which will have longer term effects on their health and wellbeing.” IFPRI estimates that Ukraine and Russia accounted for 12% of calories traded in the world. Glauber said the volatility in food prices was being felt everywhere. Countries that were particularly reliant on wheat from Russia and Ukraine may have to switch to the EU, US, Australia, Canada and Argentina for wheat supplies. “Many of these countries are in north Africa and the Middle East where wheat often accounts for as much as 35% of total calories consumed and a majority of the wheat is imported, much from the Black Sea,” he said. The Black Sea region has also been a crucial source for sunflower oil and the limiting of exports has meant vegetable oil prices rising by almost a quarter since February. Prices also rose for palm, soy and rapeseed oils because of increased demand. Earlier this week, the World Food Programme said the effect of blocked exports would hit several countries in east Africa, including Kenya, Ethiopia, Somalia and South Sudan – countries already experiencing severe drought and conflict. WFP said the price of local foods had risen a quarter, on average, compared with last year but had been as high as 92% in Sudan. It also warned that eastern African countries are fully dependent on imports for fertiliser, for which Ukraine and Russia are also a key source, and that disruption could impact local production and push food prices even further up. [Source: The Guardian]

The dramatic rise in food prices will impact the security of several Muslim countries like Egypt, Sudan, Pakistan and so forth. This calls into question US policy to entrap Russia in Ukraine, while simultaneously weakening several of their key client states in the Muslim world.

Pakistan’s Prime Minister Imran Khan has warned that if he is ousted from power, he will not recognise an opposition government. He was speaking ahead of a no-confidence vote in parliament on Saturday, which he is expected to lose. Mr Khan said he accepted the Supreme Court decision that he must face the vote, but repeated claims the US is leading a conspiracy to remove him. He did not provide evidence. Mr Khan visited Moscow to meet President Vladimir Putin as Russia was launching the invasion of Ukraine and has previously criticised the US’s “war on terror”. The BBC’s Secunder Kermani says the prime minister is widely regarded as having come to power with the help of Pakistan’s army, but now observers say they have fallen out. A number of his coalition partners have also deserted him. During his Friday address, Mr Khan urged people to come out of their houses to protest against the “foreign-funded drama” on Sunday. He added: “I will be there with you as I will never accept this foreign conspiracy against Pakistan.” The leader of the opposition, Shehbaz Sharif, said the decision to go forward with a vote of no-confidence had “saved Pakistan and the constitution”. Saturday’s confidence vote comes after opposition lawmakers put forward a no-confidence motion to parliament last Sunday, in a bid to oust Mr Khan from power. But parliament’s deputy speaker Qasim Suri – a member of Mr Khan’s political party – swiftly blocked the vote, saying it showed “foreign interference”. Mr Suri also said that it went against the constitution, which calls for loyalty to the state. Mr Khan’s government went on to dissolve parliament and called for a snap election to be held. This made several opposition members furious, with some accusing the prime minister of “treason” for blocking the vote. The expectation is that the former international cricket star, will lose Saturday’s no-confidence vote. In the event that Mr Khan is ousted from power, the opposition parties will appoint a new prime minister who can hold power until October 2023, when a new election is scheduled to be held. [The BBC]

Nothing has changed in Pakistan. The constitution is used like toilet paper by the army brass to dismiss and put in place governments that will protect American interests. Pakistan’s only salvation is to return to Islam via the re-establishment of the Khilafah Rashidah (rightly guided Caliphate) upon the method of the Prophethood.