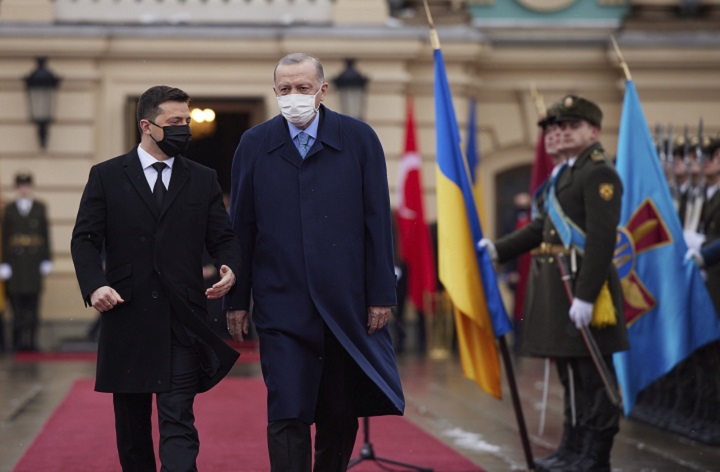 Erdoğan Offers to Mediate between Ukraine and Russia

The Turkish president and wild card of Nato diplomacy, Recep Tayyip Erdoğan, flew to Kyiv on Thursday and offered himself again in the role of mediator between Ukraine and the Russian president Vladimir Putin. He will be joining the flock of overseas leaders lending their support to Ukrainian president Volodymyr Zelenskiy and is expected to sign a free-trade deal. With Turkey’s Nato membership often under challenge, partly due to its decision to buy the Russian-made S-400 air-defence system, Erdoğan faces a difficult balancing act in showing continued strong diplomatic support for Ukraine while not damaging his complex long-term relations with Moscow. In a sign of the visit’s importance, Jake Sullivan, US national security adviser, and Ibrahim Kalin, chief adviser to the president of Turkey, spoke on Tuesday about their commitment to “deter further Russian aggression against Ukraine”, according to a White House statement. The Erdoğan mediation proposal has not yet been picked up by Russia. The US is trying to minimise the number of interlocutors with Putin and the Russian leader seems to believe the best way to solve the Ukraine conflict is through direct bilateral talks with the White House, rather than via any third party. Putin criticised Turkey last year when it sold its Bayraktar TB2 drones to the Ukrainian army. The highly effective weapons could be used against Russian soldiers supporting the rebel-held area of Donetsk in eastern Ukraine. The sale led to an official complaint from the Russian foreign minister, Sergei Lavrov, that Turkey was feeding militarist tendencies. [Source: The Guardian]

Erdogan as ever is America’s surrogate charged with looking after US interests from the Horn of Africa to the Central Asian republics. In all probability, Erdogan efforts will be ignored by Putin, unless the US has a serious proposal to de-escalate tensions.

International banks can transfer money to Afghanistan for humanitarian purposes, and aid groups are allowed to pay teachers and healthcare workers at state-run institutions without fear of breaching sanctions on the Taliban, the United States said on Wednesday. The U.S. Treasury Department offered guidance on sanctions exemptions issued in September and December for humanitarian work in Afghanistan, where the United Nations says more than half the country’s 39 million people suffer extreme hunger and the economy, education and social services are facing collapse. The U.S. Treasury said banks can process transactions related to humanitarian operations “including clearing, settlement, and transfers through, to, or otherwise involving privately owned and state-owned Afghan depository institutions.” It also outlined permitted transactions involving the Taliban, which includes the also blacklisted Haqqani Network. These include signing agreements to provide aid directly to the Afghan people, general aid coordination, including import administration, and sharing of office space. “Payments of taxes, fees, or import duties to, or the purchase or receipt of permits, licenses, or public utility services from” the Taliban, Haqqani Network or any entity in which they own more than 50% is authorized for humanitarian operations, the Treasury said. It also said aid groups are allowed to ship cash to Afghanistan for humanitarian operations and can make direct payments to healthcare workers and teachers in public hospitals and schools. [Source: Reuters]

America’s decision to release payments comes as the Taliban is engaged in talks with the West. It is unlikely, that “aid” money will be release unless the Taliban made significant concessions. The next couple of weeks will reveal the deal that Taliban have made with the West.

The International Monetary Fund on Wednesday approved a $1 billion loan to Pakistan, reviving a bailout package that had been suspended due to a delay in Islamabad’s compliance with the terms. The disbursement is part of a $6-billion (€5.34 billion) bailout package secured by Pakistan in May 2019 after difficult negotiations. The 39-month loan program — meant to help cover for major shortfalls in government coffers — is subject to regular reviews of its economic policy and growth by the IMF. The latest tranche of the so-called Extended Fund Facility (EFF) was released after the decision by the IMF executive board at a meeting in Washington. Pakistan’s finance minister Shaukat Tarin announced the coming disbursement on Wednesday night. It comes after Islamabad carried out new measures aimed at fiscal tightening and raising more tax revenues to meet Fund’s conditions, Tarin said. The last tranche of $500 million was released in March 2021. However, a subsequent tranche meant to be paid later in the year was held back because of the Imran Khan government’s failure to implement an economic reform agenda. With this disbursement, Pakistan has been loaned $3 billion from the total $6 billion package so far. The development is a shot in the arm for Pakistan’s crumbling economy which is struggling due to rising global energy and commodities prices. Attempts to increase tax revenues have probably only helped fuel inflation as a side-effect. “The Pakistani economy has continued to recover despite the challenges from the COVID-19 pandemic, but imbalances have widened, and risks remain elevated,” the IMF said in a statement. The executive board called for increased focus “on measures to strengthen economic productivity, investment, and private sector development, as well as to address the challenges posed by climate change.” [Source: deutsche welle]

Pakistan is finally rewarded $1bn after having surrendered the autonomy of the State Bank of Pakistan (SBP). The SBP will now priorities paying off loans to international creditors as opposed to helping Pakistan’s economy grow.