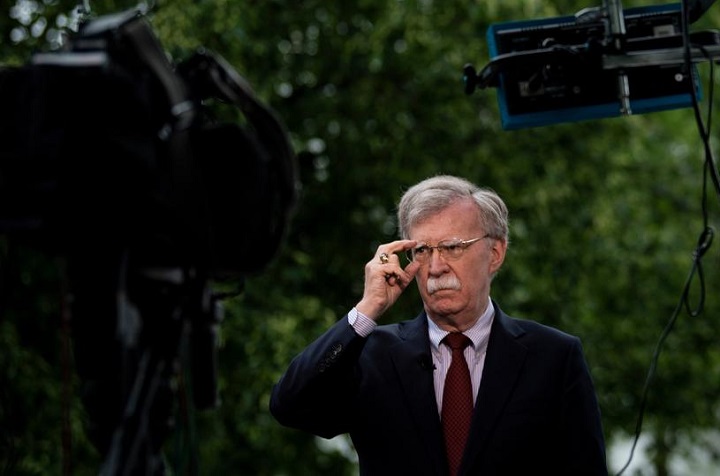 Headlines:
• Russia-China Extend Friendship and Cooperation
• Zionists Open Embassy in UAE
• Anti-Muslim Hatred in Scotland Out of Control
• New US Neoconservative Project wants a Change in Government in Turkey
• Khan: Pakistan Can Never Again Be US Partner in War

Russian President Vladimir Putin and his Chinese counterpart Xi Jinping on Monday, 29th June, announced the extension of a 20-year-old friendship and cooperation treaty between their countries.

Speaking to Xi via video conference, Putin said the Sino-Russian Treaty of Friendship, signed in 2001, enshrined the two powers’ support for defending national unity and territorial integrity, at a time when both Moscow and Beijing are at odds with Western countries on a wide range of issues. “In today’s world, such agreements are of serious importance,” the Kremlin cited Putin as saying. “In the context of increasing geopolitical turbulence, the dismantlement of arms control agreements and increased potential for conflict in different corners of the world, Russian-Chinese coordination plays a stabilising role in world affairs.” Both nations on their own lack the capabilities to challenge America’s global position as a result they try to challenge the US in their regions, by pooling their resources they could challenge America’s global dominance. But to achieve this their relationship needs to move further then energy, trade, military training and to calling for a new global system. As both do not posses an ideology they are unable to attract other nations and have no real alternative to offer the world. Despite President Trump burning his relations with allies, both China and Russia individually and combined were unable to win over the world’s most influential nations.

The Zionist entity’s new foreign minister inaugurated its embassy in the United Arab Emirates on and offered an olive branch to other former adversaries, saying: “We’re here to stay.” Yair Lapid’s two-day visit is the first to the Gulf state by the Jewish entity’s cabinet minister since the countries established ties last year. “Israel wants peace with its neighbours – with all its neighbours. We aren’t going anywhere. The Middle East is our home. We’re here to stay. We call on all the countries of the region to recognise that and to come to talk to us.” Lapid said during the ribbon-cutting ceremony at the Abu Dhabi high-rise office serving as a temporary embassy. US Secretary of State Antony Blinken, welcoming Lapid’s visit, he said Washington “will continue to work with Israel and the UAE as we strengthen all aspects of our partnerships and work to create a more peaceful, secure, and prosperous future for all the peoples of the Middle East.”

Anti-Muslim Hatred in Scotland Out of Control

Eighty-three per cent of Muslims in Scotland have experienced Islamophobia with women more likely to encounter such abuse, a landmark report found. More than three quarters of Muslims polled said anti-Islam sentiment was getting worse, while 75 per cent said Islamophobia was a regular problem in Scotland. The results came after the first public inquiry into the treatment of Muslims in the country, organised by a cross-party committee of members of the Scottish Parliament with a report written by Newcastle University academic Prof Peter Hopkins. A total of 447 people – 78 per cent of whom “identify with the Islamic faith” – and 15 organisations and agencies submitted responses. Scottish Labour leader Anas Sarwar, who heads the group of MSPs that set up the report, said the findings “should shame us all”. “There are people in Scotland who feel scared to leave their homes for fear of verbal of physical attack; are withdrawing from public services with devastating knock-on consequences on their health and education; and feel they are outsiders in their own country,” he said. Mr Sarwar, whose father Mohammad is the governor of Pakistan’s Punjab region, called for a redoubling of efforts “to challenge and overcome hatred and prejudice”. “This requires politicians to come together on a cross-party basis, because the fight against hate is a fight for all of us,” he said. Mr Sarwar said that growing up in Glasgow he “witnessed abhorrent racism aimed at my family, my friends and the Scots Asian community”. The inquiry found that the street is where abuse is most likely to take place. Thirty-one per cent of respondents reported incidents of anti-Muslim hatred at work, 18 per cent at school and 13 per cent at college or university. Verbal and physical abuse was felt to be on the rise, the poll found, as were attacks on mosques and religious buildings. Women said they were particularly fearful of having their hijab pulled off or being harassed for wearing one. [Source: The National]

The truth of the matter is that Islamophobia is out of control across Europe. European governments deliberately stoke demagoguery against Islam and openly support the Western media onslaught towards Muslims living in the West. This situation is likely to worsen in the coming years.

New US Neoconservative Project wants a Change in Government in Turkey

The line-up of a new neoconservative lobby group calling itself the “Turkish Democracy Project” has brought together a cohort of well-known right-wingers in American politics that have supported the overthrow of governments around the world. One of the latest figures to join the self-described “non-partisan” organisation is the right-wing former national security adviser to President Donald Trump, John Bolton. From 2013 until Trump tapped him to be his national security adviser in 2018, Bolton was the chairman of Gatestone Institute, an anti-Muslim think tank based in New York. Gatestone Institute has been described as “focused on stoking fears about immigrants and Muslims.” The Council on American-Islamic Relations, a civil rights and advocacy group, has called Gatestone a “key part of the whole Islamaphobic cottage industry on the internet.” Other notable individuals include George W Bush’s brother, former governor of Florida and failed presidential candidate, Jeb Bush. The former associate deputy director of operations at the CIA, Robert Richer, is also on the advisory board. The organisation is purportedly concerned about the state of democracy in Turkey, a tried-and-tested claim that has previously led the CIA to topple governments it doesn’t like. Bolton has also been accused of attempting to orchestrate a coup in Venezuela during Trump’s tenure in a bid to give US oil companies access to the country’s natural resources. Throughout his career, Bolton has also been on a crusade against Iran, advocating for the overthrow of the country’s current system of governance. In place, Bolton has supported the People’s Mujahideen Organisation of Iran (MEK), a cult-like group that was until recently a recognised terrorist organisation for killing civilians. The “Turkish Democracy Project” says that it seeks a return of the days when the country “was a reliable ally and a model in the region of liberal ideals and cultural freedom.” Between Turkey’s first democratic election in 1946 and 2000, the country experienced four coups. After the 1980s coup, Muslim women were forbidden to wear the headscarf in any public building, including schools. As a result, the law stifled women’s education. Those decades were far removed from the “liberal ideals” the organisation purports to want to take the country back to for many people in Turkey. As Turkey has sought to pursue its national security interests in its immediate region, some politicians in the US have lamented the good days where Turkey would act in Washington’s national interests. The project’s advisory council has several anti-Iran extremist voices, including the group’s CEO, Mark D. Wallace, who set up a similar group but called it “United Against Nuclear Iran.” One lesser known member of the new project is Aykan Erdemir, a wanted man in Turkey for destroying, stealing, and misusing state documents related to national security and links to the banned terrorist organisation behind the failed July 15 coup attempt known as FETO. [Source: TRT]

This is nothing new. US officials and think tanks not openly discuss regime change in the Muslim world, but also are directly involved in installing their puppets to power. The irony is that the leadership of the Muslim world including that of Turkey continue run after safeguarding US interests knowing full well that they could be removed from power anytime.

Khan: Pakistan Can Never Again Be US Partner in War

Pakistani Prime Minister Imran Khan on Wednesday denounced as “idiocy” his country’s past policy of becoming a “front-line state” in the U.S.-led war against terrorism in Afghanistan, blaming the policy for the persistent security and economic challenges facing Islamabad. “We can be, and will always remain, partners in peace with America. We can never be partners in conflict anymore,” Khan told Parliament in a statement. Khan again ruled out the possibility of providing Pakistani bases to the U.S. military for counterterrorism strikes in Afghanistan following the planned withdrawal of U.S. troops from the neighboring country after nearly two decades. The prime minister recounted that Pakistan’s decision to join the U.S. war triggered a militant backlash in his country in which 70,000 Pakistanis were killed in suicide bombings and other terror attacks, and losses of around $150 billion were inflicted on the fragile national economy. Instead of appreciating the sacrifices, Khan lamented, Washington called Islamabad a “hypocrite” and questioned Pakistan’s integrity. Pakistan’s historically roller-coaster relations with the U.S. have remained under scrutiny since U.S.-led foreign forces invaded Afghanistan almost 20 years ago. The punitive military action ousted the Islamist Taliban from power in Kabul for harboring al-Qaida leaders, whom Washington says planned the September 11, 2001, terror attacks on U.S. cities that killed around 3,000 people. Washington has consistently complained that despite receiving billions of dollars in U.S. assistance to facilitate the military mission in Afghanistan, the Pakistani spy agency covertly supported and provided sanctuary to the Taliban. The support is believed to have enabled the Taliban to organize a deadly insurgency against coalition forces in Afghanistan and regain control over swaths of Afghan territory, effectively stalemating the war. Pakistan consistently denied providing military or any other support for the Taliban. U.S. drones also routinely struck suspected militant targets on the Pakistani side of the long, porous Afghan border, attacks that allegedly had the tacit approval of the then-government in Islamabad. Washington has lately praised Pakistan for facilitating its peace talks with the Taliban. The dialogue culminated in the February 2020 landmark deal that paved the way for all U.S. and coalition troops to leave Afghanistan and close the longest war in American history. [Source: Voice of America]

Khan may deride the notion that Pakistan will no longer assist the US in safeguarding its interests in the region. The reality is that Pakistan’s civil and military leadership will go out of its way to accommodate US interests. Besides, the US can always use IMF, Financial Action Task Force (FATF), access to US markets and sanctions as a means persuading Pakistan’s leadership to do its bidding.