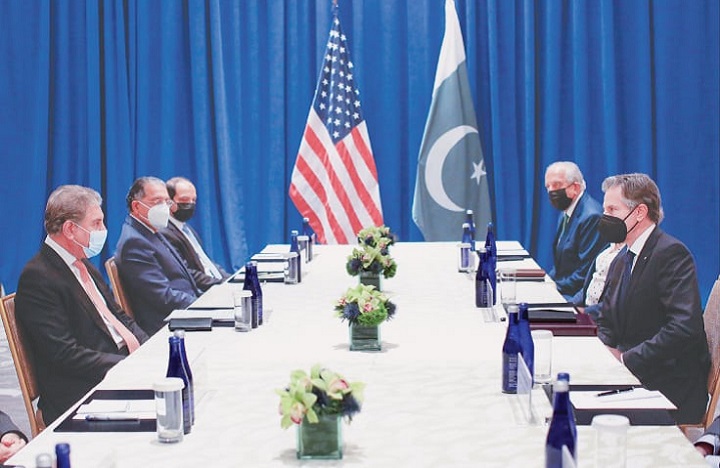 The Taliban have asked to address world leaders at the United Nations General Assembly this week in New York City. A UN committee will rule on the request but it is unlikely to happen during the current session of the body. The Taliban also nominated their Doha-based spokesperson, Suhail Shaheen, as Afghanistan’s UN ambassador. The group, which seized control of Afghanistan last month, said the envoy for the ousted government no longer represented the country. The request to participate in the high-level debate is being considered by a credentials committee, whose nine members include the US, China and Russia, according to a UN spokesperson. But they are unlikely to meet before the end of the General Assembly session next Monday. Until then, under UN rules, Ghulam Isaczai will remain Afghanistan’s ambassador to the global body. He is expected to make a speech on the final day. However the Taliban said his mission “no longer represents Afghanistan”. No government has formally recognised the Taliban as Afghanistan’s new government and for the UN to agree to its nominee for ambassador would be an important step towards international acceptance. The Taliban also said that several countries no longer recognised former President Ashraf Ghani as leader. Mr Ghani abruptly left Afghanistan as Taliban militants advanced on the capital, Kabul, on 15 August. He has since taken refuge in the United Arab Emirates. In Afghanistan itself, the last minister from the deposed government, Wahid Majrooh, has left office as public health minister after hearing that he had been replaced. [Source: BBC]

Despite their victory, Taliban is squandering opportunity after opportunity to present the true face of Islam. From formation of the interim government under Western precept to recognizing the UN, Taliban continues underscore its adherence to Western principles of politics and ruling that are alien to Islam.

Foreign Minister Shah Mahmood Qureshi met US Secretary of State Antony Blinken in New York on Thursday on the sidelines of the 76th United Nations General Assembly session. The meeting, which lasted almost an hour, began at 1pm New York time at the Palace Hotel in the city, according to Blinken’s schedule on the website of the US Department of State. This is the first meeting between the two top diplomats and as the foreign minister’s statement after the meeting showed, it focused on Afghanistan. Mr Qureshi said that close engagement between Pakistan and the United States had always been mutually beneficial and a factor for stability in South Asia. He reiterated Pakistan’s desire for a balanced relationship with the United States that was anchored in trade, investment, energy and regional connectivity. According to the official Pakistani statement, the foreign minister reiterated Pakistan’s commitment to facilitating efforts for an inclusive political settlement in Afghanistan. Pakistan, he said, also believed that “only a stable and broad-based government in Afghanistan, which reflects its diversity and preserves the gains made by the country since 2001, would be able to ensure that Afghan territory is never exploited by transnational terrorist groups ever again”.Mr Qureshi noted that a new political reality had emerged in Afghanistan, adding that “while the Taliban should be held to their commitments, the international community has a moral obligation to help the Afghan people deal with the growing humanitarian crisis in Afghanistan.” He hoped that the world would not repeat the mistake of disengaging with Afghanistan as it did in the 1990s. But diplomatic sources in Washington say that the Biden administration is not yet ready to engage with the Taliban and is waiting to see if Kabul’s new rulers keep their promises to expand their government to include non-Taliban members and to respect universal human rights. {Source: The Dawn]

Just as in the early 1990s the US used Pakistan to stabilize Afghanistan, the Biden administration is repeating the same policy. This time, the US wants Pakistan to pressurize the Taliban to make significant changes before recognition can take place. The Taliban instead of opposing Islamabad are capitulating to Pakistani pressure to ensure Taliban present a moderate version of Islam.

US-China Policy: Biden is Bringing Together Japan, Australia and India to Stare Down China

US President Joe Biden is holding the first in-person meeting of the Quadrilateral Security Dialogue, better known as “the Quad,” an informal strategic forum of the United States, Australia, Japan and India — all democratic countries with a vested interest in countering China’s rise in Asia. Biden will be joined in Washington by Japanese Prime Minister Yoshihide Suga, Indian leader Narendra Modi and Australian Prime Minister Scott Morrison to discuss “promoting a free and open Indo-Pacific,” according to the White House. The meeting comes at a time of great change for US policy in Asia. As the Biden administration moves to strengthen its diplomatic partnerships in the region, Japan is taking an increasingly hawkish view of China’s military buildup. At the same time, Australia’s AUKUS defense pact with the US and the United Kingdom has solidified Washington’s commitment to Asia while making some important Southeast Asian partners uneasy. At this critical point, what the Quad chooses to do next is more important than ever. Australian Strategic Policy Institute senior analyst Malcolm Davis said compared to its early roots under the George W. Bush administration, the Quad had evolved from a “low key political and economic dialogue” to a very significant player in the Asia Pacific region. “The Quad is not an Asian NATO … but at the same time it is clearly moving in the direction of a cooperative security approach,” Davis said. The Quad was initially proposed in 2007, but was put on hold for a decade until it was revived under former US President Donald Trump amid China’s rise as an economic and military superpower. The diplomatic environment in Asia has changed markedly since that 2017 revival — and the Quad has taken on a greater significance. In April 2020, relations between Australia and China took a major downturn after Australia’s Morrison called for an independent investigation into the origins of Covid-19. Beijing retaliated by imposing punitive restrictions on Australian goods and the relationship is yet to recover. Meanwhile, ties between Washington and Beijing that deteriorated under Trump have faltered further under Biden as the US solidifies its diplomatic partnerships in Asia with a view to containing China. The new American outreach was enthusiastically welcomed in Australia and earlier this month the two governments joined the UK to announce AUKUS, an agreement by which the three nations would exchange military information and technology to form a closer defense partnership in Asia. Japan has also welcomed greater US involvement in the region. After attempting to pursue a warmer China policy in the early years of Chinese President Xi Jinping’s time as leader, Japan has grown increasingly wary of Beijing over the past year. [Source: CNN]

The US is using the Quad and AUKUS to restrain China’s growing influence in the region. Beijing needs to react now, otherwise this institution acting under US auspices will grow increasingly stronger and will challenge China’s ascendency.