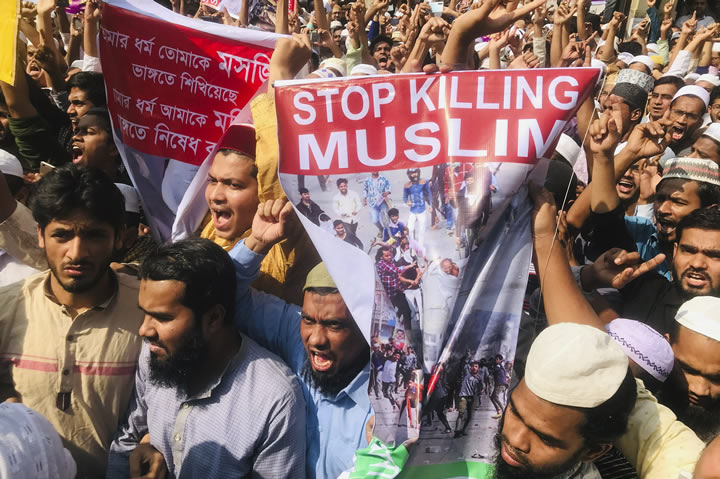 Tyrant Hasina is crossing all limits in her war against Islam and the Muslims in Bangladesh. Workers at the Banshkhali power plant in Chittagong staged a protest for ten demands including a reduction in working hours for fasting and prayers during the holy month of Ramadan. Hasina’s evil police fired indiscriminately on the innocent workers, killing at least five and injuring scores. To justify this heinous act, they spread “labor-police clashes” propaganda through the media. In a similar style, the ruthless police forces indiscriminately opened fire on innocent people protesting against the inhumane lockdown in Saltha, Faridpur district, killing many and staging up a drama of “attack on police stations and government installations” to legitimize the killings. When the Muslims are striving hard to make the most of the blessed month of Ramadan, her regime has arrested hundreds of general Muslims, political activists, and supporters of Islamic parties in connection with the anti-Modi protest, reaching a new peak in her anti-Islam identity. Not only is she utilizing the lockdown to carry out her repression, she is also trying to justify it by staging dramas full of deceit and lies. Through the news media, this lying regime is portraying the anti-Modi protest as “mayhem by the leaders and activists of Hefazat-e-Islam”, whereas we saw numerous videos in the social media how the ruling party goons including a parliamentarian attacked peaceful anti-Modi protests in various places to turn those into violent.  Hasina’s police along with her helmet-wearing party-men were the ones that opened fire at the general Muslims in a preplanned manner immediate after the Jumma prayer at Baitul Muqarram mosque. In Chittagong and Brahmanbaria also, they instigated violence and killed general people and protestors in the same calculated manner to attain their heinous political goals out of the chaos. Now as part of this deliberate and systematic crackdown, Hasina’s rogue police force is arresting the top leaders of Hefazat-e-Islam in 8-year-old cases for ‘violence’ on 5 May of 2013; whereas, everyone knows how Hasina’s so-called “Stalin forces” killed many believing Muslims in the darkness of an electricity blackout.

O Hasina, do not think for a moment that you can secure your throne by standing on the blood and honor of the Muslims. Allah Azza Wa Jal is just giving you respite until the day when your eyes will stare in horror:

“Such is the iron grip of your Lord when He seizes the cities which do wrong. His grip is painful, violent” [Surah Hud: 102]. Do not be fooled into thinking that you are untouchable for the backing you are getting from the Kafir colonial west. Your arrogance has led you walk the same path the other tyrannical rulers of the Muslim world did, but you forgot that many of their stories ended up in humiliation and agony.

To those officers in the law enforcing agencies and the military who are giving protection to the tyrant Hasina, Hizb ut Tahrir / Wilayah Bangladesh is giving you a stern warning of the consequences you will face for siding with Hasina. By safeguarding this oppressor, you are aiding her in shedding the blood of the Muslims, imprisoning and torturing them in this struggle of truth and falsehood.

“May Allah protect you from foolish Leaders”. He asked “Who are foolish leaders?” He (saw) said, “Leaders who come after me, they will not lead with my guidance, they will not adopt my Sunnah. Whosoever believes in their lies and helps them in their wrongdoing is not of me, and I am not of him, and he will not come to me at my Cistern (Howdh). Whoever does not believe their lies and does not help them in their wrongdoing, he is of me, and I am of him, and he will come to me at my Cistern (Howdh)”[Ahmed].

O Since Officers in the Military! Know that those who are facing tyrant Hasina and accounting her, they are not in a loss as they have already traded the pleasure of this duniya for the Akhirah with Allah (swt):

“Surely Allah has bought of the believers their souls and their property for this, that they shall have the garden (paradise)” [Surah at-Tawba:111]. Rather they will be the real loser who are supporting this tyranny, for this will soon end and they will have to face Al-Muntaqim Al-Jabbar (the Mighty Vengeful) on the Day of Reckoning all alone. In this blessed month of Ramadan, we pray that you will respond to the cry of the oppressed people and come forward to seize the hand of the foolish, lying Hasina. And to give the Nusrah to Hizb ut Tahrir to establish the Khilafah (Caliphate) on the method of the Prophethood.