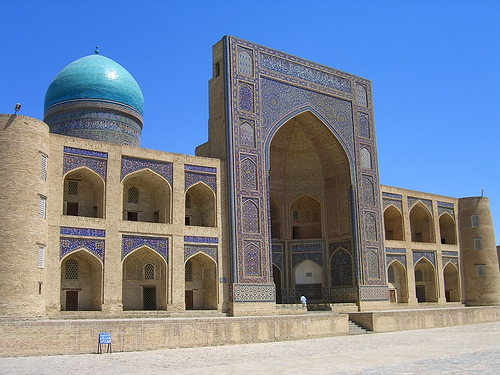 On 12 August the film, “Darkness in Hujra” was shown on the TV channel “Uzbekistan 24“. This film negatively describes how bad it is to learn in hujra, and that in the first half of 2018 in Uzbekistan, 116 illegal hujras were eliminated. Last year in 2017, 33 such illegal schools were found in the republic.

Today hujra is one of the ways of teaching children about Islam in Central Asia, and in particular in Uzbekistan. Parents give their children to the imam who teaches them at home, and during the learning they do not leave his house, living with the same children until they finish their education. This way of teaching children among the Muslims of these lands has been practiced for centuries.

Previously, it looked a little different. Traditionally in Uzbek architecture, a hujra room is the smallest room intended for one or more students. In addition to general studies, to achieve the maximum result from teaching and to increase students’ knowledge, each student outside the classroom received a separate assignment, which he diligently studied in such a room.

During the reign of Amir Temur, in order to raise the educational level among the population and making progress in science, great reforms in the field of education were carried out. In particular, in the beginning of the 15th century, madrasahs were built in Samarkand, Bukhara and Gijduvan. There were 55 hujras in the constructed Mirzo Ulugbek madrasah in Samarkand.

After Central Asia was seized by the godless communist regime, the education system underwent great changes. Madrasah was separated from life and was made under the control of godless power. The power of disbelieving colonialists forbade the calling and teaching of the peoples of these lands of Islam. Hujra became the place where Muslim children studied Islam secretly. The Muslims send their children to hujra, where children could study the Qur’an by heart for a couple of years, learn legal questions on fiqh, and learn Arabic and Persian languages in excellence. And so this continues to this day.

The persecution of imams, the teachers in hujra, was widespread under the communist regime, where under threat of death, the imams taught Muslim children Islamic knowledge. After the collapse of the Soviet Union, the imams felt a little relief, but when tyrant I. Karimov came to power, the imams in the hujra began to be pursued again. The policy of the current President of Uzbekistan, Shavkat Mirziyoyev, has reached a new level of struggle against the spread of Islam in the country, and in the region as a whole. Shavkat Mirziyoyev undertook the destruction of a special part of the country’s Muslims – imams of the hujra and their students.

Taghut of Uzbekistan being a secular forbade teaching Islam in the schools of the country. Therefore, Muslim children cannot get knowledge about the basics of their religion in school, and even more so in hujra. As for the natural sciences, even here, the tyrant’s power deliberately creates obstacles. The country is riddled with corruption. Today, in order to get into the country’s universities, you have to pay a bribe. To continue studying, you have to pay. And all the more, to graduate from a university and get a diploma of a specialist, you have to pay a bribe. Only the children of the rich can learn, and the children of the poor cannot afford to be educated.

The power of Taghut specifically creates a situation where the youth of the country remains undeveloped, because it is easier to rule ignorant people than educated and developed. Thus, unenlightened youth is doomed to a miserable undeveloped degraded existence in their religion or in practical sciences. Among the youth, lewdness and idleness increased, and as a result, because of dissatisfaction, the tendency towards suicide increased. Such young people are unable to set the society in motion towards development, and to correct their plight, and are forced to remain in the slave position of their tyrant masters.

The only solution to this decadent state of the people is the overthrow of this dictatorial regime and the radical change of the entire system in the basis of the establishment of the Islamic system and the spread of Islamic enlightenment based on the divine revelation of the Qur’an and the Sunnah. Hizb ut Tahrir is working in this direction according to the method of Prophethood, and with the help of Allah, in the near future these wicked tyrants will be punished for their crimes. Allah Almighty says in His Noble Book: