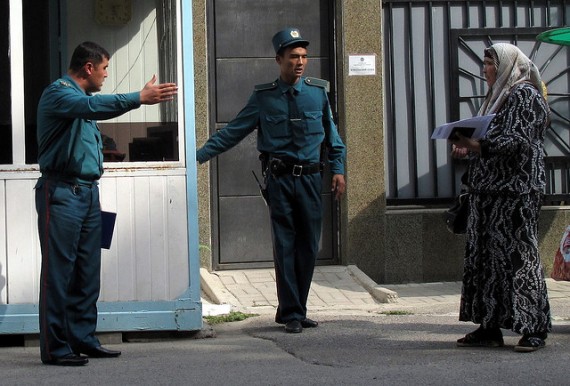 On February 21, the news agency Radio Liberty reported: “The Shayhontohursky administrative court of the city of Tashkent recognized Luiza Muminzhanova’s claim to expell her from the International Islamic Academy because of her headscarf unfounded.

–  I was told: “You must choose – a hijab or studying”. “I have chosen a hijab”, – says Luiza Muminzhanova, expelled from the first year of the International Islamic Academy, to our radio.

One of the assistants of the rector of the International Islamic Academy in Tashkent confirmed to Radio Liberty that the students of this university are forbidden to attend classes in a hijab or a headscarf.

Perhaps all the world’s gone crazy!? Today, the truth is presented as the lie, and the lie is presented as the truth! How was it possible that the teachers of the Islamic University in Tashkent stoop that low!? In the University, where young people enter to study Islam, without the fear of the wrath of Allah, they prohibit to apply knowledge in life! Don’t they know that the Almighty Allah in the Noble Quran ordered women to be covered: يَا أَيُّهَا النَّبِيُّ قُل لِّأَزْوَاجِكَ وَبَنَاتِكَ وَنِسَاء الْمُؤْمِنِينَ يُدْنِينَ عَلَيْهِنَّ مِن جَلَابِيبِهِنَّ ذَلِكَ أَدْنَى أَن يُعْرَفْنَ فَلَا يُؤْذَيْنَ وَكَانَ اللَّهُ غَفُورًا رَّحِيمًا “O Prophet, tell your wives and your daughters and the women of the believers to bring down over themselves [part] of their outer garments”. [33:59]

The noble ayat indicate the obligation for Muslim women to wear a jilbab when entering public places. Jilbab in Arabic means – the top women’s clothing or a cape, which is worn over clothing. The meaning of the word “to bring down”: the jilbab descends to the very bottom and completely covers her entire body. وَقُل لِّلْمُؤْمِنَاتِ يَغْضُضْنَ مِنْ أَبْصَارِهِنَّ وَيَحْفَظْنَ فُرُوجَهُنَّ وَلَا يُبْدِينَ زِينَتَهُنَّ إِلَّا مَا ظَهَرَ مِنْهَا وَلْيَضْرِبْنَ بِخُمُرِهِنَّ عَلَى جُيُوبِهِنَّ “And tell the believing women to reduce [some] of their vision and guard their private parts and not expose their adornment except that which [necessarily] appears thereof and to wrap [a portion of] their headcovers over their chests…” [24:31]

This holy ayat in a categorical form explain the obligation of a Muslim woman to cover her head with a headscarf. Khimar (scarf) in the lexical meaning means that which covers the head. The order refers to the covering of the neck and the neckline on the chest with this scarf.

A headscarf and a jilbab is a fard-ul-ayn for every Muslim woman who has attained the age of majority according to the Qur’an and Sunnah. All scientists of the past and the present unanimously agree on this, and none of the knowledgeable people assert the opposite.

But why do the teachers of “Islamic University” say and do the exact opposite of the orders of Allah!? So because Uzbekistan is a secular state, and the authority does not rule according to the laws of Allah. If the state is based on the separation of religion from life, it is natural that the laws enforced on people will contradict the orders and prohibitions of Allah! And so the authorities and their corrupt scholars oppose Islam and Muslims.

The self-styled imams and corrupt scientists! You help tyrants pursue the chaste Muslim women and pious Muslims by issuing fake fatwas. You have sold your future life for the mundane, and your masters will not be able to help you from the punishment of Allah. Allah Almighty describes what fate awaits such criminals: يَوْمَ تُقَلَّبُ وُجُوهُهُمْ فِي النَّارِ يَقُولُونَ يَا لَيْتَنَا أَطَعْنَا اللَّهَ وَأَطَعْنَا الرَّسُولَا * وَقَالُوا رَبَّنَا إِنَّا أَطَعْنَا سَادَتَنَا وَكُبَرَاءنَا فَأَضَلُّونَا السَّبِيلَا * رَبَّنَا آتِهِمْ ضِعْفَيْنِ مِنَ الْعَذَابِ وَالْعَنْهُمْ لَعْنًا كَبِيرًا “The Day their faces will be turned about in the Fire, they will say, “How we wish we had obeyed Allah and obeyed the Messenger.” And they will say, “Our Lord, indeed we obeyed our masters and our dignitaries, and they led us astray from the [right] way. Our Lord, give them double the punishment and curse them with a great curse.” [33: 66-68]