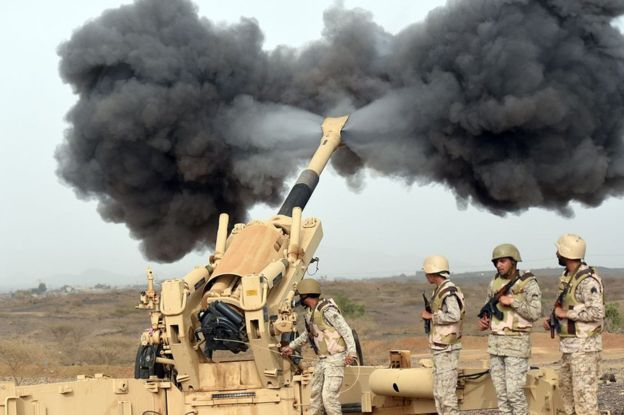 WASHINGTON — When challenged over why the United States has continued to assist Saudi Arabia and other Gulf Arab nations in a bombing campaign that has killed thousands of civilians in Yemen, Trump administration officials have often responded that American involvement is helping to hold down unnecessary casualties by advising the Saudis and their allies on targeting and rules of engagement. (NY Times)

This ridiculous excuse of getting involved with the allies’ regional disputes in order to limit civilian casualties can only come from the duplicitous USA, whose historical precedent has been to secure its own interests of propagating Capitalism via this tactic.

In Latin America, the US always supports coups d’état with the aim of replacing left-wing leaders with right-wing usually military and authoritarian regimes, as with Argentina, Bolivia, Panama and Brazil to name a few.

Likewise in Vietnam, the US supported the South against the North and the Viet Cong. A 19-year long war that dragged in the neighbouring Laos and Cambodia ensued, taking millions of innocent lives for the sake of fighting Communism.

Just as George W Bush formed the “coalition of the willing” to fight the Iraq war, leaving millions, dead, injured and displaced. Obama and now Trump, bloody US hands in the quagmire that the Middle East has become.

Since 2015, more than 127,000 people have been killed including 13,500 civilians in targeted attacks in Yemen. The vast majority by the Saudi-led coalition, according to an estimate from the Armed Conflict Location and Event Data Project. However, the real numbers are likely to be immeasurably more.

The duplicitous actions of the United States and western imperialism per se, which cannot help but interfere with the sovereignty of any nation who would oppose its creed of secular liberal freedom and free-market Capitalism – is obvious to everyone except it seems the rulers of the Muslims, who continue to ally with and grovel for the West’s attention.

Abandoning the people and importantly the Islamic ruling system, which grants security and authority to the Muslims has resulted in our insignificance as individual and collective state players.

So obviously only by returning to the holistic implementation of Islam in our lands under the promised rightly guided Khilafah (Caliphate) on the way of the Prophethood, will our collective situation change.