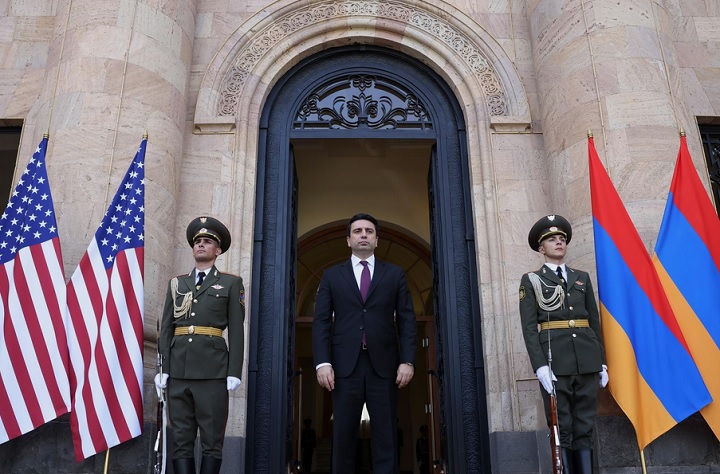 Nancy Pelosi is visiting Armenia in connection with the observance of the Azerbaijani truce, Qatari TV channel Al Jazeera reports.

Speaker of the US House of Representatives Nancy Pelosi arrived in Armenia, where a ceasefire is being observed following the outbreak of hostilities with neighboring Azerbaijan that left hundreds of troops dead on both sides.

The US Embassy said that Pelosi’s visit will include a meeting with Armenian Prime Minister Nikol Pashinyan. On Friday, Pelosi told reporters in Berlin that the trip is “all about human rights and respect for the dignity and worth of every human being.”

The TV channel recalled the two Armenian-Azerbaijani wars of 1990 and 2020, as well as the last violent clash that ended right on the eve of Pelosi’s arrival in Yerevan. Armenia has accused Azerbaijan of unprovoked aggression, but officials in Baku have said their military is responding to Armenian attacks.

Pashinyan said that at least 135 Armenian troops were killed in the fighting, while the Azerbaijani Defense Ministry said it had lost 77 people. The fighting, which has left more than 200 servicemen dead on both sides, ended on Thursday with the mediation of the “international community”, officials in Yerevan said.

Russia took responsibility for the ceasefire. Russian President Vladimir Putin told reporters on Friday that the latest clashes have become “localized” under the “influence” of Moscow.

However, the US disputes Russia’s claims. A US official told Reuters news agency during the ceasefire that Washington “sees no indication that Russian efforts have made a positive contribution to securing the most recent ceasefire.”

Simonyan, speaker of the Armenian parliament, expressed dissatisfaction last week with the Russian-led military alliance’s response to Yerevan’s request for help, the Interfax news agency reported. Armenia has asked the Moscow-led Collective Security Treaty Organization (CSTO) to intervene, but so far it has only sent a fact-finding team to the region.

“Of course we are very unhappy. The expectations we had were not justified,” Simonyan told national television, comparing the CSTO to a pistol that does not shoot bullets, Interfax reports. Noting that Armenia also has a mutual assistance agreement with Russia, he said that “we expect more tangible steps from our Russian partners, and not just statements or half-words.”

The visit of Nancy Pelosi to Armenia, against the backdrop of the latest aggravation of the Armenian-Azerbaijani conflict, can be considered as summing up the intermediate results of the Second Karabakh War. In September-November 2020, during a 44-day large-scale armed conflict, Azerbaijan was able to regain control of most of the territories lost in 1994. This became possible thanks to the active political and military support of Azerbaijan from Turkey.

The result of that war was a change in the status quo in the region, engulfed in irresolvable contradictions between Armenia and Azerbaijan, not in favor of Russia.

The rapid and almost total defeat of the Armenian paramilitaries of the self-proclaimed NKR by the Azerbaijani army openly demonstrated the loss of Russia’s former influence over these two post-Soviet republics of Transcaucasia, which was preserved as a result of the Armenian victory in the first Karabakh war of 1992-1994.

Despite the fact that in November 2020 Russia acted as an intermediary and even sent a 2,000-strong “peacekeeping” contingent to the part of Nagorno-Karabakh that remained under Armenian control, it still had absolutely no influence on the course and end of that war. In response to calls from Armenians to support them within the framework of the CSTO, it justified its inaction by saying that Nagorno-Karabakh, where hostilities took place, is an internationally recognized territory of Azerbaijan.

Also, the failure of the authorities of the NKR and Armenia to influence the situation cannot be attributed to the true reasons for ending the second Karabakh war.

The helplessness and impotence of the Armenians were obvious, including for the Azerbaijani side, which could, taking advantage of the chance, finally solve the problem of Nagorno-Karabakh and other occupied territories. According to NKR President Arayik Harutyunyan, “if the hostilities had continued, the whole of Artsakh would have been lost within a few days, there would have been more victims.”

Obviously, the decision to end the war was imposed on Baku from the outside, namely from Turkey, whose military-technical support provided the Azerbaijani army with an unconditional advantage on the battlefield. Given the role of the current Turkish regime as an American agent, it is also understood that this truce is in line with the interests and plans of the United States to finally expel Russia from the Transcaucasia and completely subordinate the region to its influence.

The fact that, despite the military successes of the Turkish-Azerbaijani alliance, a truce was concluded, with the preservation of the Armenian occupation of part of Nagorno-Karabakh, is fully in the interests of the United States. The persistence of the unresolved conflict allows the United States, if necessary, to apply pressure on any of the parties. In addition, the goal of the United States was not the destruction of Armenia, but only a demonstration of its undeniable leadership and capabilities, against the backdrop of the weakness of Russia and the EU, limited to calls for a political and diplomatic settlement, to break the resistance of its ruling regime. And, apparently, Yerevan learned this lesson, preferring to be on the side of the strong.

After an almost two-year break after the end of the Second Karabakh War, the United States is beginning to politically consolidate its results in its favor. The visit of an American delegation of such a high level is intended to demonstrate to Armenia the seriousness of intentions and the high degree of US interest in establishing deep and close relations. And Pelosi’s visit to the Tsitsernakaberd memorial complex serves as a demonstration of trust and closeness. The presence of the head of the House Committee on Energy and Trade in the delegation indicates the readiness of the United States to rid Armenia of energy dependence on Russia and the economic blockade by neighboring countries.

It seems that the United States intends to offer Armenia cooperation similar in nature to the American-“Israeli” one. That is, in addition to political and economic assistance, they are also ready to offer military-technical support. This is how you can view the statement of the chairman of the National Assembly of Armenia, Alen Simonyan, that Pelosi’s three-day visit “will play a big role in ensuring our security.”

Despite the anti-Russian rallies in the center of Yerevan, held under American flags on the eve of Pelosi’s visit, as well as the fact that she was met and accompanied by the speaker of the Armenian parliament Alen Simonyan, the United States has not yet completely strengthened its political circles in Armenia. Therefore, Pelosi, while still in Berlin, announced that her trip was “entirely dedicated to human rights,” which indicates the intention of the United States, under the auspices of political pluralism, to protect people loyal to them in Armenia from pressure from both pro-Russian clans and pro-European-minded liberals.

In addition, the US is working to strengthen its influence over the Society of Armenia, positioning itself not just as a friend and partner, but also as a protector. This is confirmed by the recent aggravation on the Armenian-Azerbaijani border, in a situation with which Pelosi defiantly took the side of Armenia, placing all responsibility on Baku. And this, despite the fact that, as Reuters notes, “such laying the blame for the conflict on one of the parties is beyond the public position of the US State Department, which has previously called for a ceasefire, but did not name those responsible for the escalation.”

At the same time, representatives of the Russian authorities, justifying ignoring the requests of Armenians for help by inconsistency with the norms and principles of the CSTO, accuse them of initiating provocations and aggressive intentions. Thus, according to Russian military expert Igor Korotchenko: “Nikol Pashinyan and his inner circle chose the path of political escalation. It is obvious that the inflating of all these issues is linked to the forthcoming arrival of Nancy Pelosi in Yerevan in order to play along with Washington and indicate the anti-Russian bias in the current policy of Yerevan.”