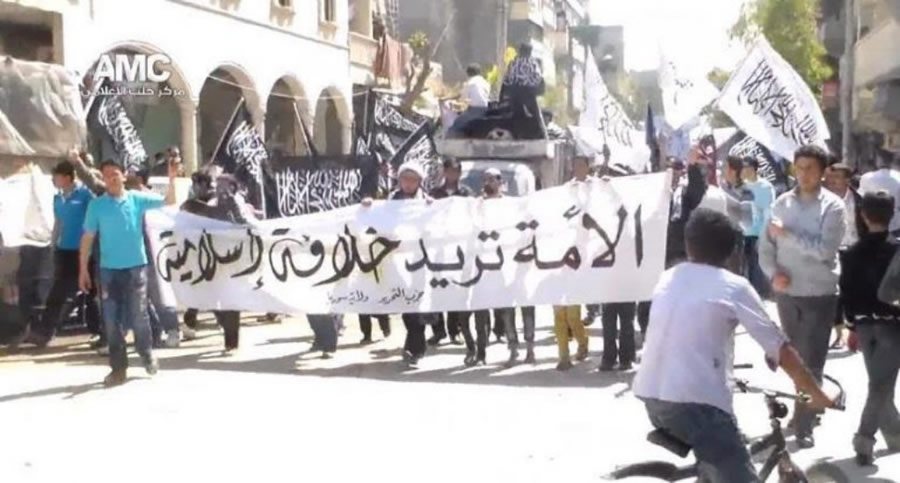 A hundred years have passed since the Western Kafir colonialist demolished the Khilafah (Caliphate) in Rajab 1342 AH corresponding to March 1924 CE, with the complicity of the era’s criminal Mustafa Kamal and other traitors from the Arabs and Turks.

A hundred lean years that the Islamic Ummah has lived and is still plagued by intellectual conquest, nationalist and patriotic tendencies, discord and division, a loss of its dignity, and a confiscation of its political, economic, social and other decisions. In addition to the oppression of Capitalism, dressed in a deceptive dress of democracy, to plunder the wealth of the country and destroys the worshippers in the Muslim countries from east to west.

The colonial disbelievers were not satisfied with this, so they attempted to distort Islam as a religion by describing it and equating it to terrorism at times, and as a religion that deprives the rights of non-Muslims at other times, all of this when they saw that Islam, even in the absence of its Khilafah (Caliphate) and its guardian, the Caliph, has become the most widespread religion on the face of the earth today. When they were unable to stop the spread of Islam to their homes and among their children, their arrogance consumed them, attacking the sanctities of Muslims and their symbols, exemplified by the most honourable the Prophet Muhammad, peace and blessings be upon him and his family, then the Holy Qur’an. Then they deliberately tried to obliterate the teachings of the Sunnah and cast doubt on them. Indeed, their racism and blind hatred reached to the extent of shedding of the blood of Muslims living in Europe, and attacking chaste veiled Muslim women on the streets, and they are the ones who falsely claim the rights of women.

Then, here they are calling on Muslims to announce their rejection of the idea of changing society, which is the core and essence of Islam, that is, the idea of political change in societies, and rather confining it to worship in mosques! These and many others are just the tip of the iceberg of the war on Islam and its dawah carriers.

In light of this total darkness, Hizb ut Tahrir is still earnest, hardworking and steadfast with the grace of Allah the Almighty, raising the banner of political change in the Muslim countries, until Allah the Almighty prevails it, through the second Khilafah Rashidah (rightly guided Caliphate) upon the method of the Prophethood or perish without it, so it observes with its eyesight and insight, with certainty of the Kindness of Allah the Almighty and His generosity, while one hundred years have passed since the destruction of the Khilafah, may Allah bestow upon us success through conquest or something from Him (swt), so the party while placing the trust in Allah the Almighty it launches a campaign, “On the Centenary of the Destruction of the Khilafah (Caliphate) … Establish it O Muslims,” mobilizing its energy and media platforms, to raise, by Allah‘s permission, people’s awareness and access to public opinion about the Khilafah, whose returning convoy is led by the command of the eminent scholar Ata bin Khalil Abu Al-Rashtah, until the convoy reaches its destination; The second Khilafah Rashidah based upon the method of the Prophethood, and yearning to earn the great pleasure of Allah (swt), not stopped by the deception of the oppressors or the plotting of the stalkers, especially since the party took this matter as a fateful cause, that is, a life or death measure is taken against it, which is the Khilafah. Under which the path and the goal would be sought, honour and protection would occur and it is the one which preserves the religion and the world, and it is the origin and the one that separates between truth and falsehood, by which judgments are established, boundaries assured, lands are opened, heads are raised up with the truth, and it is that which liberates the country and the servants from the influence of the disbelievers and their agents, and the brutality of their minions and their henchmen. It is the one which spreads justice and goodness, glorifies Islam and Muslims, eliminates injustice and oppressors, and humiliates Kufr and disbelievers.

As part of this blessed effort, Hizb ut Tahrir / Wilayah of Lebanon calls on Muslims in Lebanon to proclaim and call for this campaign on their pulpits, in their councils, and on social media, and to seek in the sacred month of Rajab, Rajab of goodness, Rajab of abundance, that Allah Almighty pour His Mercy on the Ummah in abundance, in succession, empowerment and security, may Allah Almighty honour us with His promise:

As well as giving the glad tidings of the Messenger of Allah (saw):

And the Hizb invites you to visit its websites and social media outlets, and to share the reward through this campaign within Lebanon and the world, and to interact on the ground with its workers who pray night and day until the sun of Islam shines again in the state of justice and righteousness, which is for Muslims and non-Muslims, the second Khilafah Rashidah upon the method of the Prophethood, so may Allah Almighty remove this sorrow from others as He (swt) removed it from the first good people,

“Allah shall indeed conclude His decreed matters; Allah has set a due measure for everything” [At-Talaq: 3]