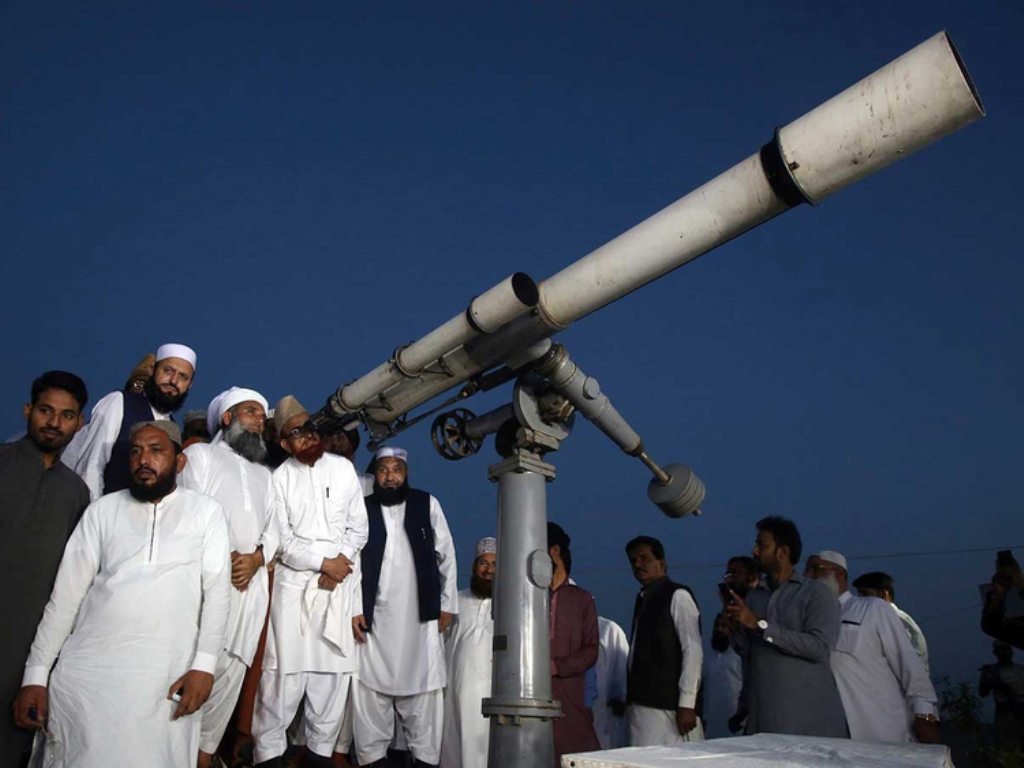 In the time of RasulAllah ﷺ and the Khulafa’a ar-Rashideen (ra), the Muslims would begin and end the fasting of Ramadhan together, in accordance to the Sunnah of RasulAllah ﷺ. He ﷺ said: «صُومُوا لِرُؤْيَتِهِ وَأَفْطِرُوا لِرُؤْيَتِهِ» “Fast upon its (the crescent moon) sighting and break the fast upon its sighting” (an-Nisa’i). The hadith addresses Muslims altogether in the plural form without any distinction. This indicates that this Hukm is for all Muslims, irrespective of their area.  RasulAllah ﷺ clarified that the sighting of the crescent moon by any one Muslim in any one land, necessitates that Muslims in other lands also follow their sighting. Regarding sighting the crescent, no Muslim has preference over another and no land has preference over another. It was reported from a group of the Ansar (ra), «غُمَّ عَلَيْنَا هِلَالُ شَوَّالٍ فَأَصْبَحْنَا صِيَامًا فَجَاءَ رَكْبٌ مِنْ آخِرِ النَّهَارِ، فَشَهِدُوا عِنْدَ رَسُولِ اللهِ صَلَّى اللهُ عَلَيْهِ وَسَلَّمَ أَنَّهُمْ رَأَوُا الهِلَالَ بِالأَمْسِ؛ فَأَمَرَ رَسُولُ اللهِ صَلَّى اللهُ عَلَيْهِ وَسَلَّمَ أَنْ يُفْطِرُوا مِنْ يَوْمِهِمْ، وَأَنْ يَخْرُجُوا لِعِيدِهِمْ مِنَ الغَدِ» “The crescent of Shawwal was hidden from us (by clouds) so we arose the next morning fasting. Then a caravan from outside Madinah arrived towards the end of the day and the people in it witnessed to the Prophet ﷺ that they had seen the crescent yesterday, so he ﷺ commanded us to break our fast and to gather for Eid the following morning.” (Ahmad)

As for the opinion of Abdullah Ibn Abbas (ra) who rejected the sighting of Al-Sham conveyed to him by Kurayb, who had travelled to Al-Sham from Madina and had returned to report the sighting to Ibn Abbas (ra), the majority of scholars responded to this by explaining that this was the ijtihad of Ibn Abbas (ra). It is known that the Ijtihad of a Sahabi does not specify the generality of Qur’an or Sunnah. Moreover, this Ijtihad contravenes evidences mentioned above. Indeed, RasulAllah ﷺ accepted the sighting of the travelers who came to Madinah from elsewhere.  So it is obligatory upon all Muslims to start Ramadhan together and celebrate Eid together. The sighting by any Muslim, anywhere in the world, of the crescent for the start of Ramadhan and Shawwal is legally binding upon all Muslims.

The required sighting is the sighting by the eye. Astronomical calculations cannot be used as a substitute for this sighting by the eye. The Shariah cause for fasting and breaking fast is the sighting of the crescent by the eye, due to the saying of the Prophet ﷺ, «إِذَا رَأَيْتُمُوهُ فَصُومُوا، وَإِذَا رَأَيْتُمُوهُ فَأَفْطِرُوا، فَإِنْ غُمَّ عَلَيْكُمْ فَاقْدُرُوا لَهُ» “When you see it (the crescent) then fast, and when you see it, then break the fast. If it is hidden from you, then determine it.” (al-Bukhari). Thus Islam made the start of Ramadhan and Shawwal compulsory on the sighting of the moon. It is therefore not allowed to use calculations to determine either the start of Ramadhan or the celebration of Eid.

By adhering to the Blessed Sunnah of RasulAllah ﷺ, the Khilafah (Caliphate) on the Method of Prophethood will ensure that the great Ummah of Islam, from Indonesia to Morocco, will practically unify in its Fasting of the Blessed Month of Ramadhan, its beginning and its end.