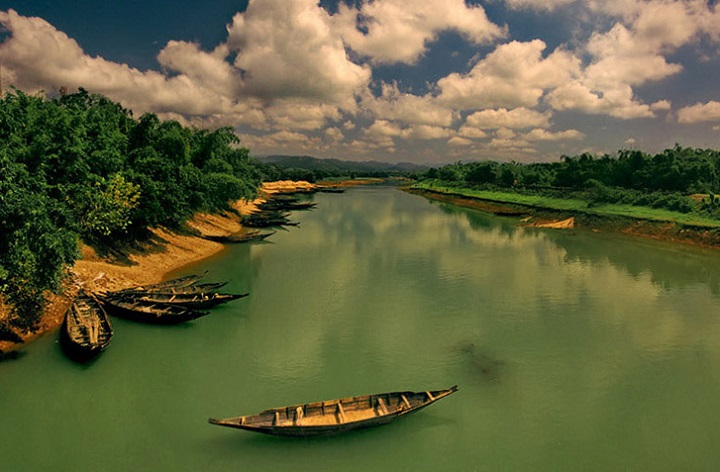 Rivers are vital natural resources for Bangladesh’s economic growth and development. Being home to the world’s largest river delta, Bangladesh always has vast potential of increasing trade and strengthened food security. But the nonstop illegal encroachment of the rivers by the crony capitalists supported by widespread government corruption are slowly sending almost all our 700 rivers to deaths. And another misery to add to this already miserable livelihood and socio-economy of the riverside areas is the mindless land grabbing of Minhaj River in Paikgacha, Khulna. 2.52 acres of this river’s land have been given by the government to private hands as lease for fishery business, even though the river is a public property also depended on for irrigation for agriculture by the people. The shrinking navigability of the river and its canals has led to the collapse of the drainage system of at least 70 villages of two upazillas depending on that water. On top of that, unplanned embankment of these private fish farmers causes artificial flooding and severe water logging problem during monsoon, destroying the livelihoods of the rural people.

Such artificially created crises of lives and livelihoods and the destruction of public properties are quite natural for a society that embraces capitalist ideology and allows secular governance. Because the evil nexus of Capitalism and secularism revolves around material benefit only, while it ignores and forgets public interest. Monopolization and looting of people’s resources and money to amass wealth for the sake of the few is in the heart of Capitalism. And the dysfunctional and wicked secular governance is there to ensure this corruption. So, we see that on the one hand Bangladesh’s secular government declares river grabbing as criminal offence, but on the other hand its officials hand over the rivers to the elites with impunity.

O People in Bangladesh, the unabated grabbing of rivers and looting of other natural resources by the corrupt capitalists cannot be stopped unless you stop the ruling of secular democracy. To safeguard these common properties and benefit from it, you must haste to bring back the promised second Khilafah Rashidah (Righteous Caliphate) on the method of Prophethood. The imminent Khilafah understands that the natural occurring resources like river are in fact a trust of the people and thus public properties that have to be utilized in the best interest of the Ummah as a duty upon her assigned by Allah (swt). Rasool Allah (saw) categorically said:

«النَّاسُ شُرَكَاءُ فِي ثَلَاثٍ: فِي الْمَاءِ، وَالْكَلَأِ، وَالنَّارِ»“Three things cannot be denied to anyone: water, pasture and fire” (Ibn Majah). He (saw) took back a land that he (saw) had given to his companion Al-Abyad Bin Hammaal (ra) after finding out that there was a source of minerals within it. He then immediately declared that land a public property and forbade its ownership by individuals. So, we urge you to work hard for the re-establishment of the Khilafah State that shall implement Islam fully so that the ongoing crises created by secular capitalism comes to end.