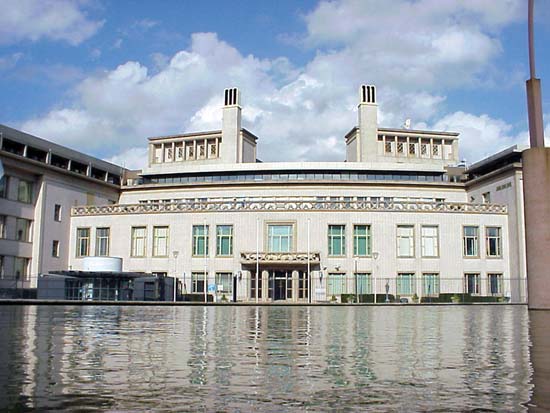 The U.N. War Crimes Court that prosecuted atrocities committed during the breakup of Yugoslavia in the 1990s, and put former Serbian President Slobodan Milosevic on trial, closed its doors on Thursday after two decades. (Reuters)

First of all, these Tribunals were set up by the United Nations which itself is only a tool established by the colonialist West in order to obscure the atrocities they themselves cause and breed due to their colonial policies of exploitation and destruction of other lands for their own sake. The cause of any political unrest, racism, genocide and other atrocities throughout the world is the existence, dominance and influence of these Western colonialists: their ideology, and their instruments of implementing their ideology.

Let us give some examples of the achievements of the ICTY: Slobodan Milošević died in his prison cell before being punished for his war crimes. Radovan Karadžić was sentenced to 40 years of imprisonment after 22 years of trial, which is not even close to being fair and to provide justice for the Muslim women, men and children who suffered under his crimes and are still suffering under the consequences of these. Criminal Slobodan Praljak swallowed poison before UN judges in The Hague, moments after the declaration of his 20-year jail sentence on November 29, 2017. While this circus of trials was prolonged over more than 20 years, the Muslims of Bosnia and Herzegovina have been bereft of their right to autonomy upon their own land, through a dictated form of governance enforced upon them by the UN and the Western World which forces them to share power “democratically” with the murderers and rapists of the Muslim population upon the Muslim soils.

At the same time, these tribunals idly watch the ethnic cleansing in CAR, look away from mass murderers like Bashar Assad in Syria, Aung San Suu Kyi in Burma, the slaughter conducted by the Houthis and Saudi Arabia in Yemen, and the countless atrocities of the world’s largest Terror Organization the Zionist Occupying Entity called “Israel” and its Settlers in Palestine. Thus, what the UN and its Tribunals perform is merely window-dressing with terms of justice and law.

The whole mankind in general and the Muslim Ummah in particular must be aware of the vanity of these organizations and instruments in providing justice for mankind. True justice – not only for Muslims but for the entire mankind regardless of religion, race or ethnicity – will only be achieved through establishing the Allah-given ruling system of Islam, in the Khilafah Rashidah State (rightly guided Caliphate) upon the Method of Prophethood. This state will firstly eradicate the power and the influence and colonialism of the world’s capitalist powers who are a danger to the whole mankind, but it will first and foremost eradicate the enemies of Islam and the Muslims. And then this state will implement the courts of Islam, which will not have prolonged trials and which will not just lock up mass murders behind bars, but will execute the order of Allah (swt) upon murderers without delay. Then the world will enjoy true justice and peace as it did in the past under the Khilafah.