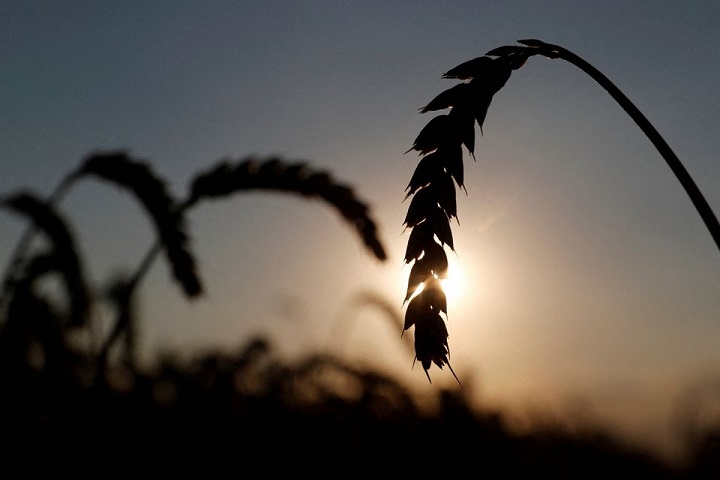 Ukrainian farmers have 20 million tonnes of grain they cannot get to international markets, and a new harvest is about to begin. What can be done to get the food to people who desperately need it, as prices soar around the world?

Ukraine punches far above its weight as a food exporter, contributing 42% of the sunflower oil traded on the global market, 16% of the maize and 9% of the wheat.

Some countries depend heavily on it. Lebanon imports 80% of its wheat from Ukraine and India 76% of its sunflower oil.

Even before the war, the world’s food supply was precarious. Drought affected wheat and vegetable oil crops in Canada last year, and corn and soybean yields in South America.

Covid had a big impact too. In Indonesia and Malaysia labour shortages meant lower harvests of palm oil, which pushed up vegetable oil prices globally.

At the beginning of this year, the price of many of the world’s staple foods were reaching all-time highs. Many hoped that crops from Ukraine could help make up the global shortfall.

Before the war, 90% of Ukraine’s exports left via deep ports in the Black Sea, which can load tankers large enough to travel long distances – to China or India – and still make a profit. But all are now closed. Russia has seized most of Ukraine’s coastline and blockaded the rest.

Russia’s offer to open a corridor through the Black Sea for food shipments, in return for an easing of sanctions, came as the European Union was discussing on Wednesday a fresh package of sanctions and showed no sign of changing course.

For now, food can only be taken out of Ukraine over land or on barges via the Danube River.

He’s been trying to transport goods since the start of the war, and is exasperated by the mountain of paperwork the EU requires, which he says has created queues at the border up to 25km (16 miles) long.

“It’s just paper, it’s not like they are actually taking samples of the corn. You just have to have the paper,” he says.

On 18 May, two days after the EU announcement, customs authorities asked his drivers for two forms that they had never seen before. “The border is not getting easier, on the contrary it’s getting more bureaucratic,” he says.

Comment:
The handful of companies that control the world’s grain market are under a renewed spotlight, as a looming global famine draws nearer. The Russian invasion of Ukraine had exacerbated an already critical situation, that staple foods for so much of the world are imported using precarious and vulnerable supply chains. The big question for Muslims is why we are importing so much of our food via these capitalist supply chains, and why are we not achieving a higher level of self sufficiency at home?

As always the capitalist system that the rulers of Muslim lands have submitted to is responsible for the disjointed and foreign serving agricultural and energy policies, all of which is made far worse by the artificial national borders and resultant lack of cooperation between disparate parts of the Muslim Ummah.

Capitalism allows taxation of agricultural inputs, via general sales taxes and customs duties, greatly raising the cost of seed, pesticides and chemical fertilizers. Capitalism hands over the energy sectors to private ownership, increasing the cost of fuel and utilities. Capitalism allows the owner of agricultural land to extract rent as cash or crops from farmers, regardless of the state of their harvest or their hardship and indebtedness. On top of all this, corrupt rulers ignore sensible agricultural policy in favour of their short-term enrichment.

Until the Khilafah (Caliphate) rids the Muslim lands of the disastrous capitalist system the whole world will remain on the brink of famine.