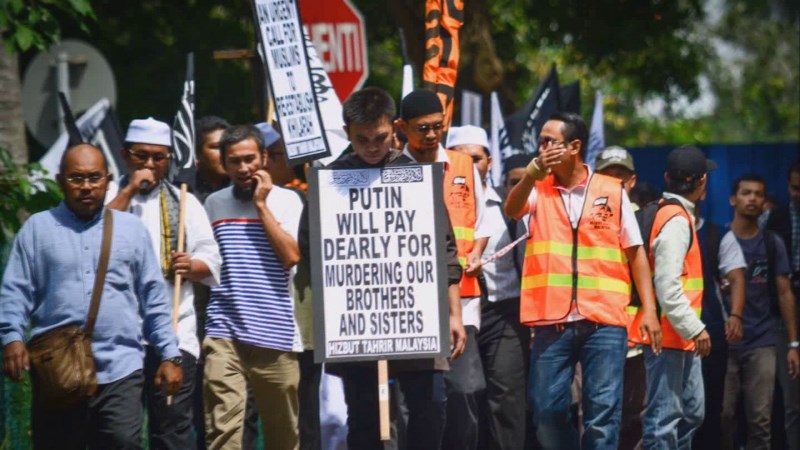 On 04/05/2018, the Magistrate’s Court of Kuala Kubu Bharu has freed two Shabab (members) of Hizb ut Tahrir / Malaysia (HTM) who were charged under Section 8 (2) of the Publication and Printing Presses Act 1984. The decision was read by the Magistrate at the end of the defense’s case, after the prosecution succeeded in raising the prima facie case before. Both of the accused, Ustaz Darukhutni Zainal Abidin, 51, and Mohamad Alhafiq Mohamad Khoiruddin, 27, were arrested for distributing Sautun Nahdhah (official leaflet of HTM) entitled “LGBT: Scabies from the Western Civilization” and “5 Years of Syrian Conflict, Isn’t There a Solution?” outside Nurul Iman Mosque, Serendah on 20/5/2016. The decision was greeted with joy and praises to Allah (swt) by about 20 Hizb ut Tahrir members and their families who attended the court proceeding.

Indeed, there were many flaws and weaknesses in the prosecution’s case all along the trial. Even at the very beginning, there was awkwardness when the offense of distributing leaflets under the civil law was linked to a Fatwa on Hizb ut Tahrir, which falls under the jurisdiction of the Shariah court. By connecting the charge of distributing leaflets with the slanderous Fatwa of Selangor on Hizb ut Tahrir, coupled with the lackadaisical approach of the police and prosecutor in-charge of the case, it is clear that the arrest of the duo was politically motivated and carried out solely due to orders from their superior. That was why they failed to prove the “element of crimes” in this case! The police’s attempt to make the da’wah of Hizb ut Tahrir a crime is indeed very shameful!

Although Hizb ut Tahrir is pleased with this decision, we always bear in mind that there are great challenges and tests still awaiting ahead of us. We will continue with our work as usual, and will further strengthen our determination and struggle to face the future challenges. Winning or losing in a court’s fight will never curtail, even slightly, the spiritual struggle of the members of Hizb ut Tahrir.

Hizb ut Tahrir fully understands that as long as this colonial-inherited system and laws do not change, the efforts to uphold Islam will face various hindrances. This is because a government that practices secularism is undoubtedly hostile against true Islamic Da’wah carriers. Thus, any attempt to uphold Islam, even with the distribution of a piece of leaflet, will certainly be prevented. In addition to this case, there are five other court cases involving Hizb ut Tahrir members versus the government, further evidencing how the work of Hizb ut Tahrir in Malaysia are being opposed by the ruling secular government. These do not include other difficulties faced by Hizb ut Tahrir outside the court.