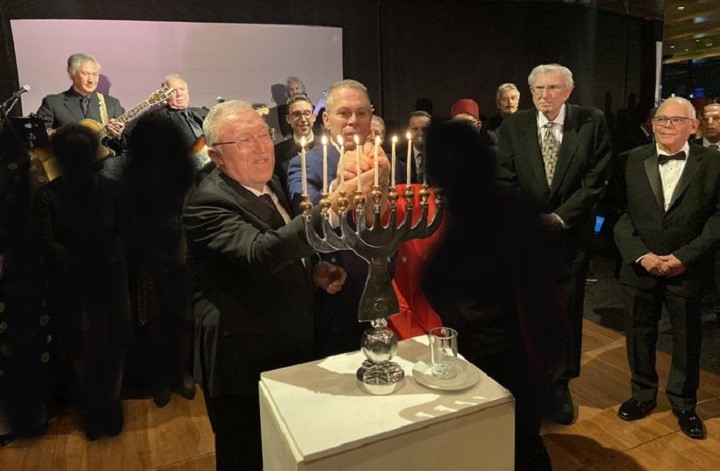 At the 16th Parliamentary Union of the Organization of Islamic Cooperation, President Erdoğan said at the opening session: “The Palestinian issue is one of the significant pillars of the Organization of Islamic Cooperation. Defending Quds means defending the humanity. The unjust and heartless blockade of Gaza continues. We have never made a segregation between griefs and death, we will not do it also in the future. It is a necessity of our faith to help the oppresses regardless of who they are. The case of Quds is not just the case of a handful of brave Muslims, yet it is the common cause of the entire Islamic World.”

Comment:
It is possible to analyze the utterances of Erdogan in different dimensions.

First of all, Erdogan is never sincere in these rhetoric. On the one hand, he talks about the cruelty of the Jewish presence, and on the other hand, he emphasizes that he is delivering kind messages to the Jewish presence and strengthening relations again. On a phone call that President Erdogan had last month with the president of the Jewish Presence, he noted that Turkey-Jewish entity relations are also important for the security and stability of the Middle East. He said that differences of opinion can also be minimized if bilateral and regional issues are acted upon in mutual understanding, and it is necessary to restore a culture of peace, tolerance and coexistence in the region. In this regard, he expressed that the development of Palestinian-Jewish entity relations and the resumption of the peace process are a priority.

As can be seen from the descriptions, we encounter two different portraits of Erdogan. For years, while Erdogan, by virtue of the new American politics, tries to strengthen the political and financial relation ties with Egypt, the UAE and other countries, which were on the tenders. On the other hand, he also wants to re-strengthen the diplomatic relations that were supposedly strained with the occupying Jewish presence, which he previously called the baby killer and the state of terror.

On one hand, Erdogan is talking about the persecution of the Jewish presence for the upcoming presidential elections in 2023 in order to consolidate its own grassroots, while on the other hand, he makes a phone call to the occupying Jewish presence, President Isaac Herzog, who massacred Muslims, congratulating him on his election as president.

Nevertheless, last month he released an ‘Israeli’ couple who had taken photos of Erdogan’s house and were detained for alleged espionage just to please the Jewish presence. After that, the President and Prime Minister of the Jewish entity called Erdogan by phone to express their gratitude for the release of the couple. Again, in order to prevent damage to diplomatic relations that tend to be normalized again with the Jewish presence, the Mavi Marmara case was closed and Muslims were left alone and unattended.

Of course, betrayals are not limited to this. A senior Turkish official told the Hayom Newspaper published in the Jewish entity that the Turkish government has conveyed that he is ready to appoint an ambassador to ‘Tel Aviv’ if the Jewish entity also undertakes to appoint an ambassador simultaneously. In order to revive relations with the Jewish presence and to please them, another great betrayal has been committed. At the National Sephardic Society Gala, organized by the Sephardic Brotherhood of America in New York which brought the Sephardic community and Turkish Jews who immigrated to the United States from the Ottoman state and Turkey together, Hasan Murat Mercan, the Turkish Ambassador to Washington, lit Hanukkah candles with the Ambassadors of the Jewish entity and Greece at the National Sephardic Society Gala held in New York.

Actually, all this shows us something. It is also the fact that the betrayal that takes place behind the closed doors is now obvious. Erdogan is taking such dirty political steps both to please America and to protect his own seat. He has big talks that he cannot make real and cannot fulfill with a populist rhetoric that Muslims are fond of. He is exerting all his strength for this purpose to please America and the West. But shouldn’t Erdogan have taken steps to please his Lord, shouldn’t he have protected the interests of the Ummah by mobilizing armies that would usurp and uproot the occupying Jewish presence from the blessed land of Palestine?