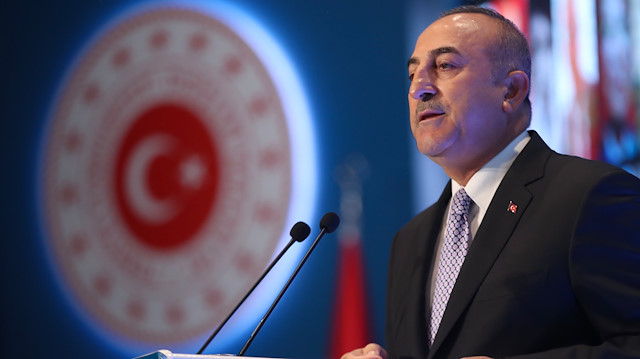 In the opening speech of the 11th Ambassadors Conference, Cavusoglu, while emphasizing the “Asia Anew” initiative, said, “Our aim with the ‘Asia Anew’ initiative is not an axis shift. Now our Western friends will again start complaining by saying: What is going on? Does Turkey have axis shift in its foreign policy? Has Turkey turned its back on the West while turning its face to another place? Then I am asking you this: While it is not becoming an axis shift in your foreign policy or change in you when you go there, why it is becoming an axis shift when Turkey goes there?”

Comment:
While this statement made by Foreign Minister Mevlut Cavusoglu, in a sense, highly pleased the West, it was full of misfortunes for us, Muslims. How not? In this statement, the friendship of the disbelievers which Allah strictly forbids to make is declared. It has been guaranteed that Turkey will continue to follow Western politics and it will not turn its back on the West no matter what happens.

* It is America together with the West, who killed about two million Muslims and terrorized Iraq by entering it just to realize their exploitation goals.

* They were the colonial infidels under the leadership of the US, who killed hundreds of thousands of innocent Muslims by invading Afghanistan under the pretext of “counterterrorism” on the ground of the 9/11 attacks. That is the West.

* It is also the USA and its collaborators who is running the politics in Syria and, in doing so, ruthlessly slaughtering and leading the killing of thousands of Muslims.

* France, considered the cradle of democracy, is the perpetrator of one million Algerians who were killed. It has mercilessly turned African lands into a bloodbath just for the sake of his own dirty and exploitative ambitions.
This is the West and what they do, on whose axis rulers are almost proud of, to move and guarantee to stick to its policy.

As can be seen, the criminal record of the democracy and secularism-based politics pursued on the Western axis is not clean. Until now, the West, which has occupied the Islamic lands in order to bring a peaceful and stable life through democracy, has taken nothing but blood, tears and chaos to these lands.

With what kind of perspective are the rulers of Muslim countries giving guarantees of doing politics in the axis of the democracy and secularism which turned their countries into bloodbath, razed them to the ground and left no head over the shoulders. Isn’t this the “Stockholm Syndrome” what the rulers experience? In other words, isn’t it to fall in love with one’s executioner?

So I’d like to ask; What kind of perspective is this that you are liking the West that puts a loop on your neck?

How can the terrorist US and the colonial infidels, who killed millions of innocent Muslims can be your strategical allies? How can the state, which has turned Iraq, Afghanistan, Syria and other Islamic lands into a bloodbath for its dirty exploitation ambitions, become your friend?

Undoubtedly the executioner of the Muslims is the West and its democracy, which are the greatest sedition of our century. It is a great misfortune that Muslims living in these ancient lands have been ruled by Sharia for so many years are now governed by democracy and blasphemy, which was never acquainted and reconciled in history.

However, the real misfortune is that rulers, who are elected with the hope of bringing Islam back, who find support with their Islamic discourses and sometimes talk loudly to disbelievers, are making efforts to popularise the West and its indispensable part, its democracy, to the Muslims.

As you may remember, years ago, when former Foreign Minister Rex Tillerson visited Turkey, he said: “Our operations by using bases in Turkey increased by 25 percent compared to the past.” How can you explain your love for the West while they are massacring your brothers with the means you have provided? Don’t you feel ashamed? Hasn’t this ever bothered you or does it not bother you at all?

Since it is the Western colonialist infidels, especially America, who causes that much bloodshed on earth and so much pain and tears, then abandon the Western-based politics and admiration. Instead, follow politics that emanates from Islamic creed. End your partnerships with the US and the colonial infidels. Kick them out from our lands, countries and bases that they are using like their backyards. Because Allah forbids to establish friendships and strategical partnerships with infidels.

“O you who have believed, do not take the disbelievers as allies instead of the believers.”
[an-Nisa: 144]

Finally, turn your face away from the West to Allah Subhanahu wa Taala by immediately terminating any political, economic and military cooperation. Look for the glory with Allah, not with the unbelievers… As real power and strength belongs to Allah, the Lord of the entire universe.