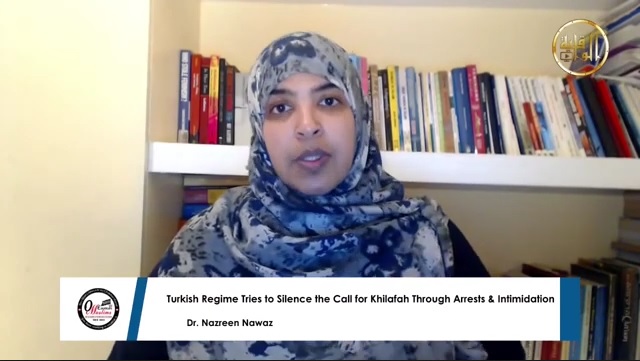 Dear Brothers and Sisters, Al-Waqiyah Channel was to host a discussion tonight with sisters from Turkey regarding the impact of the loss of the Khilafah (Caliphate) upon the lives of women globally over this last century. However, due to the regular and continuous arrests of our Muslim brothers, sisters and even youth in Turkey who are calling for the Khilafah by the secular Turkish regime…. we have had to cancel this discussion.

In this month of Rajab, Hizb ut Tahrir organised an international campaign entitled – “Upon the Centenary of the Destruction of the Khilafah…Establish it, O Muslims!” to mark 100 years since the loss of this glorious state. As part of this campaign…. Muslim brothers and sisters globally, including in Turkey, have organised various discussions and activities to call for the urgent establishment of the System of Allah (swt), the Islamic leadership and state – the Khilafah.

Erdogan and his AKP government have demonstrated their continuing enmity towards Allah’s System by seeking to silence this call by regularly harassing and arresting those supporting the establishment of the Khilafah based upon the method of the Prophethood.

Two weeks ago, Ankara police units stormed the houses of Muslim women and detained 3 mothers of young children and a 16-year-old young girl. During the same day they detained another young mother together with her four-month old baby…. taking the women 300 km away from their homes to a distant city for interrogation and detaining them for a number of days. What was their crime? Recording a video in Afyon, the former Amuriyya in which they reminded the Muslim Ummah of their need for a distinguished ruler to protect the Muslims like Khalifah Muttasim, who rushed to the defence of a single captured Muslim woman upon her cry, “Wa, Muttasim!”.

In recent weeks, a 15-year-old boy was also arrested for his involvement in a video calling for the return of the System of Allah. A few days ago, 11 Muslim brothers from Urfa were arrested for talking to the people of the city about the Khilafah. And this morning, 7 Muslim brothers were arrested in Gaziantep for simply distributing a magazine about the Khilafah. And there have been similar arrests in recent weeks in Bursa and Istanbul.

I ask you brothers and sisters…is this a crime…to call for the Laws of Allah (swt) to Grace this world a crime? Or to call for the System of our Rabb to lift our lands and humanity from the darkness of kufr which plagues this world today to the light and justice of Islam? Or to call for a Khalifah who will protect this Ummah, its honour and its Deen and provide sanctuary to the oppressed? OR is the true crime the persecution of the sincere Dawah carriers who seek nothing more than to fulfil the obligation of Allah (swt) to establish His state upon this earth…that will put an end to these 100 years of death, destruction, dishonour and despair that the Muslims have suffered in the absence of their shield and guardian, the Khilafah?

Brothers and sisters, you should know about another malicious policy of the Turkish regime…and that is that even though they may detain our brothers and sisters for what may appear as a few days…they do not release them from arrest until they open a law-suit against them. This means, that after a few years, and following the completion of the court case against them, the authorities will re-arrest them and place them in jail for 2-5 years. The regime follows this insidious style of persecuting the dawah carriers for the Khilafah in order to try to hide from the attention of the Muslims – their crime of imprisoning these honourable servants of Allah …. for they know very well that the Muslims in Turkey would stand against any mass arrests and imprisonment of their innocent brothers and sisters.

This is the true face of democracy and secularism that criminalizes the honourable Muslim men and women who remind the servants of Allah of His System…while at the same time legalizing all forms of immorality, shamelessness and corrupt lifestyles in its society! This is the true face of Erdogan and his AKP government who do the bidding of their Western masters in trying to silence the voices of those who call for the establishment of the Islamic System in our lands…while at the same time acting as defenders to a system that gives sovereignty to man over Allah and His Shariah!

We ask all those who follow these criminal orders of this secular regime and its Western allies, and those of power in Turkey’s army who give allegiance to these treacherous rulers who are fighting against the return of Allah’s System….what excuse will you give to your Rabb for your actions, and for your obedience and loyalty to a regime which persecutes your brothers and sisters simply because they fulfil the Command of Allah, and because they wish to live under the laws of your Deen and to return glory, dignity and protection to our Muslim lands and this Ummah under the shade of the glorious Khilafah?

And we say to Erdogan and his AKP regime…your intimidation and threats against the sincere dawah carriers for the Khilafah are in vain for these are men and women who fear none but Allah (swt), give obedience to none but Allah (swt). Men and women who have sold their worldly life to the Lord of the Worlds in exchange for the endless blessings of Jannah…and who thirst for the rewards of the Akhira by raising the torch of the Dawah in order to spread the light of Islam across the world. They will not rest until Allah’s System governs over our lands…for they are not pleased with anything else but the Pleasure of their Lord. Indeed, your oppressive actions only hastens the demise of your repressive secular rule… for it strengthens their and our determination to achieve our goal!

Have you not learnt from the history of mankind and the history of Islam…that those who serve their Rabb will always be victorious against those who seek to oppose them? So this fight you are waging on behalf of your colonial masters against Allah and the sincere Believers to prevent the return of the Khilafah is an unwinnable battle…for Allah’s support will always be with those who raise His banner. Indeed, the establishment of the second Khilafah Rashidah is Allah’s Promise expressed in the Glad Tidings of His Rasul (saw)…and He (swt) never fails in His Promise! Allah (swt) says:

“Indeed, those who oppose Allah and His Messenger, they will be amongst those most humiliated. Allah has written, “I will surely overcome, I and My messengers.” Indeed, Allah is Powerful and Exalted in Might.” [Al-Mujadila: 20-21]

By Dr. Nazreen Nawaz
Director of the Women’s Section in the Central Media Office of Hizb ut Tahrir