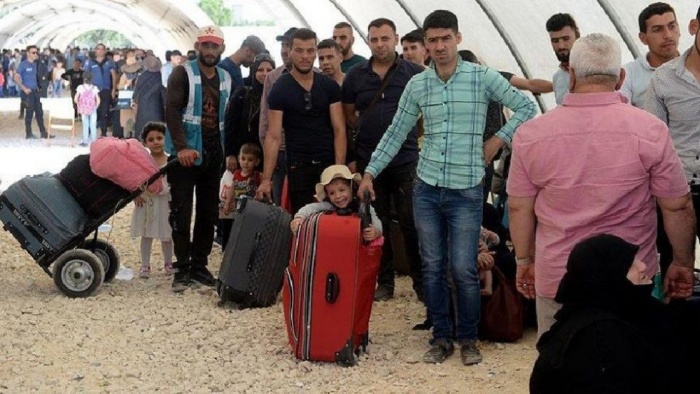 In connection with the debates after the decision about deporting unregistered Syrians in Istanbul, the Minister of Internal Affairs Suleyman Soylu said that deporting Syrians under temporary protection status is beside the point. Soylu, who remarked that this situation is completely about the fight against illegal migration said that deportation was out of question for Syrian people who are under temporary protection or have residence permit and for foreigners who are granted international protection status. (https://tr.euronews.com 28.07.2019)

The Russian General Staff stated that it takes joint steps with Turkey against armed militants in Idlib Province in Syria. The Russian General Staff official Sergei Rudkoi said, “Together with our Turkish colleagues, we are taking steps to identify the weapons, equipment and arsenals of ‘the terrorists’ and destroy them accurately”. (www.gazeteduvar.com.tr 30.07.2019)

Comment:
Turkey and the AK Party government are making plans to send back the Syrian immigrants, who took refuge in Turkey, due to the nationalist secular Kemalist pressure and the fact that AK Party’s refugee policy is being charged by their defeat in local elections, and especially in the Istanbul mayoral elections. On the other hand, it carries out the operation plans it fictionalized together with Russia in Idlib within the frame of the Astana Agreement, for the effectuation of the Syrian political solution plan of the United States. The above-stated two news items show the path that Turkey followed in domestic and foreign politics from the beginning of the Syrian Revolution in March 2011 until today and the point we arrived at. Because Turkey has not determined an independent Syria policy which belongs to itself, it turned its back to the Syrian Muslim immigrants who took refuge in Turkey, as well as the Muslims in Syria and especially in Idlib who consider Turkey as a friend. In brief, Turkey and the AK Party government failed the Syria test in either domestic politics or foreign politics.

Firstly, the Deportation of Syrian Refugees

The first and most effective anti-propaganda against Syrians on this matter in Turkey is accusing Syrians of “treason.” Those who are working for the deportation of Syrian refugees say: The Turkish army fights for the Syrians in Jarablus, Afrin and Syria, and our soldiers are martyred for them, but the Syrians live in joy in Turkey’s coastal cities.

First of all, I have to say the following: In Syria, there is not a situation wherein an army fights another army; on the contrary, the Assad army, Iran forces, Russian air force and International Coalition forces -including Turkey- fight on one side, and Islamic armed groups fight on the other side. In other words, the refugees in Turkey do not have an organized army to join and fight Assad when they go to Syria. Moreover, those who say, “Syrians should fight for their homeland” name the people who resist and fight for their life, property and honor as “terrorist”. So, they are in such a contradiction too. As for the hypothesis that the Turkish army fights and is martyred for Syrian Muslims in Syria, this is absolutely not true. Unfortunately, the Turkish Army fights for the United States and Russia in Syria. When it gave the Operation Euphrates Shield a start and entered Jarablus, Aleppo fell and was handed over to the Assad regime. When it gave the Operation Afrin a start and established a monitoring center around Idlib, the resistance in Idlib got in a difficult situation and it provided an opportunity for Russia and Assad’s massacres. The Sochi agreement does not bear any good for the people of Idlib and the insurgents. So, the Turkish army stays in Syria for the sake of Western imperialists, and not for the oppressed Syrian people.

Those who say that the Syrians should be sent back, bring the following hypothesis forward; “The reason for the financial crisis and unemployment is the Syrians.” The AKP government and Erdoğan cannot and do not oppose the defenders of this thesis and do not admit that the Syrians transferred between 30 and 40 billion dollars of hot money to the Turkish economy during the war. They do not admit that this hot money, brought into the market by the Syrians in times of shortage of hot money, and brought life to the Turkish economy. Therefore, this hypothesis is a false hypothesis, fed with lies and used by those who want to breed bad blood against Syrians in the society. The Turkish state neither pays the Syrian refugees a salary nor the rents of their houses. They all came with their own sustenance (rizq), and they work, earn, bring in and put bread on the table. The Syrian immigrants are not a burden on someone’s back.

This campaign against the Syrians causes destruction in the Turkish people’s will to live together with Syrians, and it causes the breeding of bad blood. And the government, who uses this as an excuse, tries to find a way to get rid of the Syrians. The AK Party government really suppresses the Syrian immigrants by oppression which the Ansar will not deem proper towards the Muhajir.

Secondly, anyone who takes refuge in a country from a war zone cannot be sent back to the country he/she comes from even when he/she committed a crime, as long as he/she did not commit terror crimes and does not have a communicable virus. This is what the law says. However, the person can go back at own request. And right here, the Turkish police performs a very oppressive act. It makes the Syrians, it wants to send back, sign documents about “their acceptance to go back to Syria at own request”. How could this be defined by other than oppression?

In short, the Turkish government oppresses our immigrant brothers and sisters from Syria by giving in to the pressure of a secular Kemalist group, and it causes the breeding of bad blood between the Syrians and the Turkish people by supporting the campaign against Syrian refugees. Neighborhood, brotherhood, and the task of Ansaar are unfortunately being forgotten.

Turkey has turned its back to the Syrian people and the Syrian Revolution in foreign policy since the very beginning. It has kept company with the United States and ran after its political solution plan. It has become the practitioner of US policies together with Russia. Today, Russia openly says that it carries out joint operations with Turkey in Idlib, and Turkey does not deny this. It takes part in the massacres done by Russia in Idlib. While Turkey discusses the deportation of refugees to Syria in the public agenda, and it hides the operations and massacres it performs with Russia in Syria/Idlib. It appears that the civilians and children killed by daily bombardments in Idlib do not have a value before the Turkish media and AK Party government.