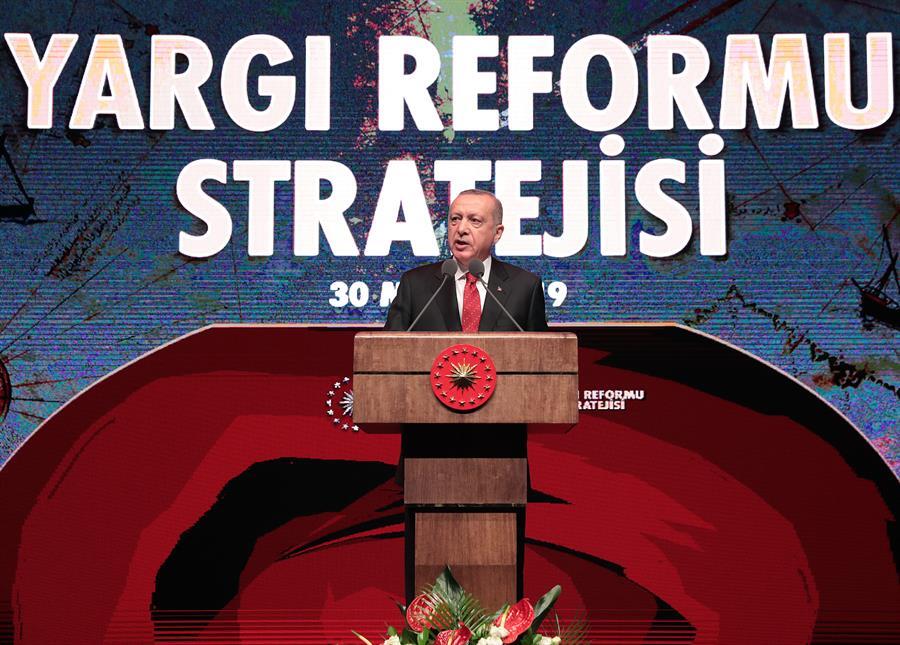 President Erdoğan announced the Judicial Reform Strategy Document. The document which is comprised of 9 articles, 63 targets and 256 activities, includes topics like the appointment of judges and prosecutors, 5-year education period in the law faculties, green passport for attorneys, measures for precautionary detention, and extension of information and documentation access rights. During his presentation Erdoğan said: “One of the greatest gains of the EU accession process was the ability to systematically implement reform efforts. We are implementing the reforms not because the EU wants us to, but because our nation needs it. With this reform document, even though the promises given to us were not kept, we express our commitment to the full EU membership process. We have prepared the justice reform strategy document in the framework of enhancing the independence and impartiality of justice and easing jurisdiction.”

While president Erdoğan announced the Judicial Reform Strategy Document in Turkey on Thursday, May 30, the same day, maybe in the same hours, US State Department Spokesperson, Morgan Ortagus, verified in a press conference that Serkan Gölge, a US citizen, who was sentenced and imprisoned in Turkey with the allegation of having contacts to the Gülen Organization, was released. Within the same day again, US President Trump made the following statement to the journalists: “We just had news that Turkey released a prisoner that we were trying to get, and they released him a little while ago into home custody and will be released from home custody to the United States pretty soon.  And I just want to thank President Erdoğan.  We dealt with that, and he was — it was great.”

Tens of reform packages have been announced throughout tens of years of this judicial system, which is merely a rag bag. However the judicial persecution of the oppressed people and aggrieved Muslims has never stopped. Reform packages constituted hope for only the powerful, partisans with political background, mafia and gangs with the backing of political parties, European and US citizens, and for lawyers hailing the green passport. Muslim victims and prisoners of the February-28-period were never included in these reform packages, neither were the brave men of Hizb ut Tahrir, who are innocently incarcerated in the dungeons. These reform packages are prepared to meet the demands and needs of the EU and the United States, as Erdogan said, and not to meet the needs of the nation.

In his purely politically motivated strive to win the mayorship over Istanbul, President Erdoğan feeds the secularists, liberals, Kemalists, nationalists and even separatists with financial benefits and advantages on the one hand, and on the other hand he seeks to pull the wool over the people’s, the public opinion’s and the international community’s eyes through this kind of reformation packages. Additionally, the release of US citizens upon the commands of Trump makes the Dollar sink, which serves to produce an artificial economic stability, at least till June 23.

As long as there are Muslims in the dungeons, simply for calling to the Truth, carrying the Islamic Dawah, rejecting secularism and democracy and demanding the Khilafah, these judicial reforms are no judicial but purely political reforms. As long as there are 8000 fathers held in the prisons together with real rapists, simply for having married before the age of 18 and therefore labelled as rapists, this reform is not implemented because the nation needs it, but because the EU wants it. As long as there are members of Hizb ut Tahrir in the prisons in Turkey and their motion for new trial is still being denied, despite police intelligence reports, which state that Hizb ut Tahrir never resorted to violence and even rejects violence and terror. Furthermore, while even Turkey’s Constitutional Court decided that it is not a terrorist organisation, there is nothing on this reform that could be judicial or just.