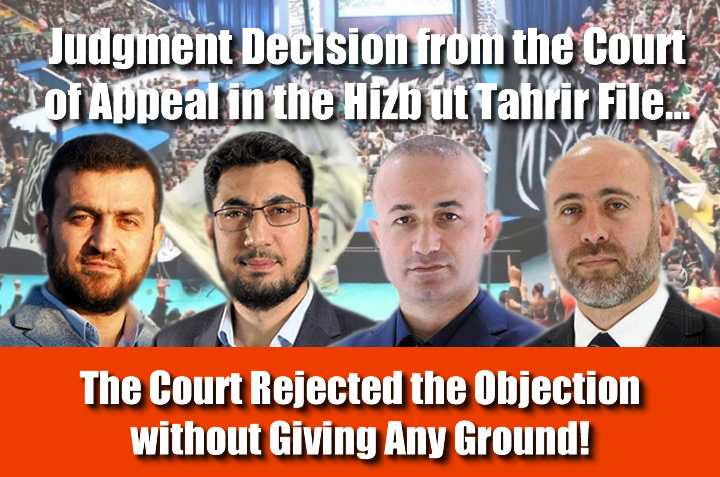 In the proceedings regarding the Caliphate Conference, which was planned to be held on March 5, 2017 in Istanbul but did not take place due to the civil administration’s refusal, the Court of Appeal rejected the objection to the penalty decision of the local court without giving any reason.

The conference titled “Why Does the World Need the Caliphate?”, which was planned to be held in Istanbul on March 5, 2017 was blocked without any reasonable justification, and proceedings were initiated against the conference speakers. In the trial initiated by the Istanbul 30th High Criminal Court; Mahmut KAR, Osman YILDIZ, Abdullah İMAMOĞLU and Musa BAYOĞLU, who were among the conference speakers, were sentenced to 31 years and 3 months in total.

With the appeal of the lawyers of the file, the case was moved to the Court of Appeal. On 17/05/2022, the 2nd Penal Chamber of the Istanbul Regional Court of Justice arbitrarily rejected the objection without giving any reason. The Court of Appeals said that there was no unlawfulness in the substantive and procedural law in the trial held by the first instance court (IST 30th High Criminal Court). The court of appeal delegation rejected the objection, saying that there was no deficiency in the evidence and the proceedings, and that the evaluation was appropriate in terms of proof.

With this decision, the Appeals Chamber disregarded 9 separate violations of rights regarding the Hizb ut Tahrir trials by the Constitutional Court. Because the Constitutional Court gave 9 decisions of violation of rights, including 1 General Assembly and 8 chamber decisions, said that the courts of first instance and the Court of Cassation violated the “right to a reasoned decision” in the proceedings regarding Hizb ut Tahrir and ordered a retrial.

After the decision of the Court of Appeal, İmamoğlu made a statement on his Twitter account and used the following statements: “Today, the Court of Appeals, despite all the rulings of violations of rights by the Constitutional Court, justified and upheld the 6.3-year sentence of the local court against me. This is an unlawful and unjustified approval. It is not a crime but an honor to shout out the fact that the world needs the Caliphate.”

Lawyer Mustafa KOCAMANBAŞ said: “The court of appeal upheld the sentences given to the conference that couldn’t be held, Reason; It was not bothered to write, I did it, the judgment is at work, This is injustice, callousness, the Turkish judiciary goes backwards, not forward, with these decisions.”