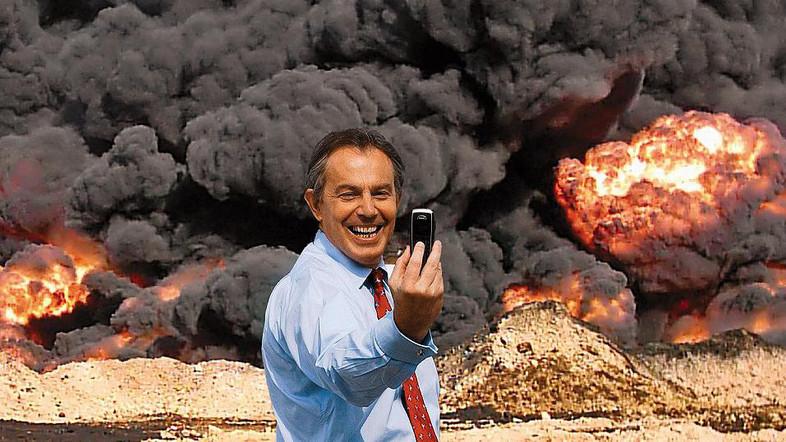 Tony Blair’s most recent outburst has been to call for the ideas of “Islamist” groups to be challenged, naming Hizb ut Tahrir among them.

It is ironic that he is the Prime Minister most remembered throughout the world for forcing his liberal democracy upon Iraq and Afghanistan with bombs and bullets, yet now he sits on a moral high chair talking about an intellectual challenge. Where was his intellectual discussion when millions marched against his invasion of Iraq? Where was it when he fabricated evidence and stood by the United States as they lied to the world trying to shore up support for their adventurism in the Middle East?

We in Hizb ut Tahrir welcome any intellectual challenge to our ideas. We further challenge Tony Blair to stand up to actually debate his ideas. Fabrication, fear and fruitless wars can sum up Tony Blair’s notion of a debate in the past, but perhaps he is now ready to put those cowardly tactics behind him to avoid scrutiny. Perhaps he is now willing to truly debate whether the British State is in fact hostile, not only to Muslims, but to all ordinary peace-loving peoples in the world.

If you ask any Muslim in Burma, the Blessed Land – Palestine, Iraq, Libya, Syria, or Afghanistan – whether the British State is hostile – the answer is a definite yes. It was Britain that created the Burmese state and excluded Muslims from any political authority, guaranteeing the kind of persecution that we all see there today. It was Britain that created the Jewish entity’s occupation, unjustly usurping the land from the people of Palestine, and Britain today still supports that occupation, despite the heavy cost to life that the people of Palestine suffer until today. Britain supported the Libyan dictator Gaddafi for decades, along with his contemporary Saddam in Iraq. Britain then sent their planes against Libya, as they do today in Syria. Britain and America invaded and occupied large parts of Afghanistan and Iraq, again leading to huge loss of life and oppression of the people.

These are just a few of the more recent crimes against humanity that the British state has committed. It is not, therefore, strange or untrue that politically aware Muslims should publicly expose the hostility that Britain has shown and continues to show towards Muslims overseas.

The irony is, while the ordinary people of the Muslim lands know the hostility of the British State all too well, the evil dictators who run those countries know nothing of it. The likes of Saudi crown prince Muhammad Bin Salman, whose hands are covered with the fresh blood of the Yemeni people, is an honoured guest in Britain. Ironically, it was Tony Blair himself who approached Gaddafi warmly. Even while former Egyptian President Hosni Mubarak was imprisoning three British citizens after an unfair trial, myself among them, Tony Blair was holidaying in Egyptian Red Sea resorts as a guest of the dictator, who was soon thrown out by the Egyptian people.

It is a bit rich that a war criminal and duplicitous liar such as Tony Blair should be calling for a robust challenge of the ideas that he calls Islamism. Not only did his government support the internment and violence against Muslims with peaceful political ideas that were opposed to his business interests, he also publicly called for Hizb ut Tahrir to be banned in Britain.

Ordinary British people need to know that when elite politicians of the Blair ilk talk of challenging ideas, they mean anything but intellectual debate. As they know very well that their own bankrupt secular ideas cannot stand up to any serious scrutiny, they can only hide behind securitisation and stigmatisation policies like Prevent which aim to prevent real intellectual discourse about Islam.