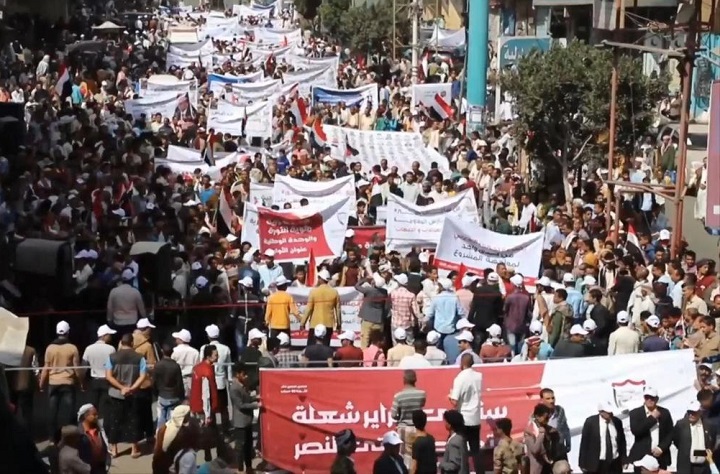 Hundreds of Yemenis in Taiz Governorate celebrated, on Thursday evening, the eleventh anniversary of the peaceful February 11 revolution, which removed Ali Saleh from power under the Gulf initiative on April 3rd, 2011. The February 11 revolution in Yemen began peacefully in response and harmony with the revolutions that broke out in Tunisia, Egypt, Ash-Sham and Libya, from the various parts of the Islamic Ummah, in light of the sense of injustice that befell upon them after long decades of absence of justice, the decline of knowledge, the spread of ignorance and the prevalence of poverty in the Ummah. Although those regimes are the most fortunate with the sources of wealth on earth, and the monopoly of unjust authority and the signs of bequeathing thrones to their sons, for all of this, the revolution began in Yemen to overthrow Ali Saleh and remove him from power as a reaction to the injustice and corruption of his authority.

Although the February 11 revolution did not achieve what the people of Yemen were aspiring for in terms of real change, due to the diversion of its course and surfing the wave that lost its compass of the revolution at the hands of the opposition parties, which were considered the other side of the regime, as well as external interventions to preserve the regime from change, and because those who carried out the revolution did not possess an intellectual and political project that is in line to the creed of the people of Yemen. The patriotic nature of the revolution made it remain separate from the rest of the countries in which similar revolutions took place, and this is a complete mistake, but it has broken the barrier of fear among the peoples, and revealed the rulers’ faults with their betrayals and workers. Therefore, the directive for any revolution or any call for change must be from the rulings of Islamic law against all these corrupt regimes. Because all these systems emerged from the Sykes-Picot agreement to serve the colonial system. It makes no sense for the revolution to succeed in Yemen or elsewhere and to stand by and watch what is happening in Libya, Tunisia, Algeria, Egypt or Syria. Therefore, we must be an Ummah that is proud of its religion and no one else, just as we are an Ummah that is very rich in its resources and strong and able to restore its dignity and freedom without begging the so-called humanitarian intervention from the Western colonial regime, which is the source of all our calamities in Yemen, Iraq, Syria, and all the Islamic countries.

The failure of the revolution does not mean despair and failure to act for change, rather it must be a motive for that, but the radical change must have a method that those who seek change will follow to achieve the goal that is intended to be reached, which is summarized in preparing a loyal group that is aware of Islam and its rulings that interact with the Ummah, in order for it to convey Islam, so that it takes it as a cause for itself, in order to work to find it in the reality of life through intellectual struggle and political struggle, and to seek help from the people of strength and protection who believe in the idea of change, until it takes over the rule and implements Islam and carries it to the world by dawah and jihad.

O revolutionaries who celebrate: Let your goal be to resume the Islamic way of life, and to carry the Islamic call to the world. This goal means returning Muslims to live an Islamic way of life in the abode of Islam, and in an Islamic society, so that all the affairs of life in it proceed according to the legal rulings, and the viewpoint in it is what is permissible and what is forbidden under the rule of the second Khilafah Rashidah (rightly-guided Caliphate) upon the method of the Prophethood, in which Muslims appoint a caliph. They pledge allegiance to him to hear and obey to rule by the Book of Allah (swt) and the Sunnah of His Messenger (saw). And that Islam should carry a message of guidance and light to the world through advocacy and jihad, and that you know that your Ummah may remain silent on oppression, but it does not die, and that you know that those who led you and are still leaders who surrendered themselves to your enemies, they betrayed your religion and your blood, trampled on your wounds and climbed atop your cries in exchange for their interests and hence do not relate to your religion and your interests at all. And here is Hizb ut Tahrir extending its hand to you to work together to obtain the good of this world and the Hereafter.