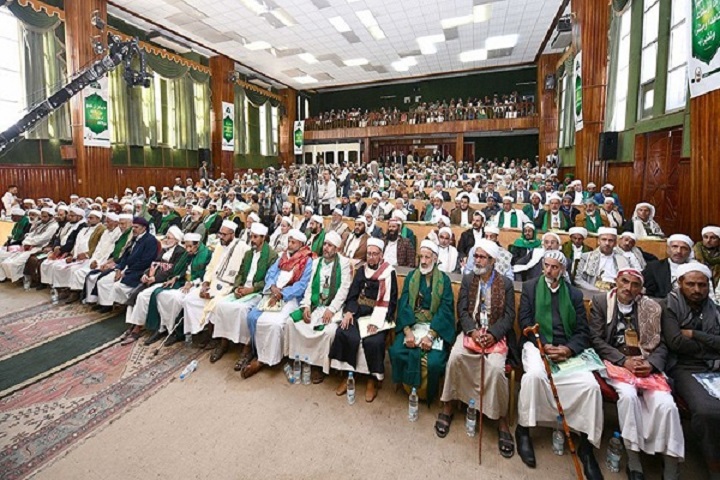 A conference was held in Sana’a on 28/10/2021, organized by the Yemen Scholars Association and the General Authority for Endowments under the title “Islamic Unity… Opportunities and Challenges”. The conference was hosted via satellite broadcasts with participation from Palestine, Iraq, Lebanon, Algeria and Iran. Allah (swt) said:

“Only those of His slaves fear Allah who are knowledgeable” [TMQ Fatir: 28] And he (saw) says:

We liked to start with this noble verse and this noble hadith to clarify the status of the scholar, who is beneficial in his knowledge, sincere in his work.

“Say, ˹O Prophet,˺ “Are those who know equal to those who do not know?” None will be mindful ˹of this˺ except people of reason.” [TMQ Az-Zumar: 9].

You know that the Messenger (saw) was sent with the Great Qur’an, not only to be recited in tongues, but to be applied on people on earth, so that he (saw) would have a state that would establish its limits, implement its rulings, strive with it in the rightful of jihad, establish justice and spread goodness throughout the world. This is clearly demonstrated in the Seerah of the Messenger of Allah (saw), he called to Allah (swt) with insight in Makkah al-Mukarramah, and asked for the support of the tribes and the people of power ten times, until Allah Almighty helped him with the supporters of Madinah al-Munawwarah, and there was migration and the establishment of the state, then the conquests and the spread of Islam by dawah and jihad.

Since the title of your conference, which was held in Sana’a, was: “Islamic Unity… Opportunities and Challenges”, it was worthy of us to explain to you that the unity of Muslims will not be achieved except under the shade of a single state for Muslims governed by a single Khaleefah (Caliph) and with a legitimate method in its establishment that our Master Muhammad (saw) followed.

Working to unify the Ummah of Islam by establishing the Khilafah State is not a crucial issue because it is the source of the pride of Muslims, and the secret of their strength and invincibility, but also because it is first and last an obligation and not any obligation, it is the one which implements Islam. Allah Almighty said, addressing His Messenger (saw):

“So judge between them by what Allah has revealed, and do not follow their desires over the truth that has come to you.” [TMQ Al-Ma‘ida: 48]. And Allah (swt) says:

Ruling by Islam will not be achieved under a state that mixes between Islam and secularism, between the ruling system in Islam and the republican democratic capitalist system, between the economic system in Islam and the capitalist economic system with the arms of the Bank and the International Monetary Fund. Between a state that makes the national bond the one that binds its subjects and borders it with borders drawn by the Kafir West, and between a state that makes the bond of the Islamic faith the basis and is not bounded by national borders, but rather works to unite Muslim countries, between a state whose constitution is secular, originating from France, and a state whose constitution comes from the Book of Allah (swt) and the Sunnah of His Messenger (saw).

Islam without a state cannot be fully implemented, because its rulings cannot be implemented without a Khaleef (Caliph), so the limits are not established and conquests are not opened, and the honour of Islam is not preserved except by the imam, i.e. the Khaleef (Caliph).The Messenger of Allah (saw),spoke the truth:«وَإِنَّمَا الْإِمَامُ جُنَّةٌ يُقَاتَلُ مِنْ وَرَائِهِ وَيُتَّقَى بِهِ»“The imam is only a shield behind whom fighting is engaged in and by whom protection is sought ” Agreed Upon.

Hizb ut Tahrir – which was founded in 1953 in Jerusalem – realized that the Khilafah (caliphate) is the fateful issue for Muslims, and that its establishment is an obligation, and therefore it has worked to establish the Khilafah (caliphate), and for more than half a century, its workers has been subjected to harm, arrest, imprisonment and torture, which led to the martyrdom of a number of their workers in some Islamic countries. Nevertheless, it remained firm on the truth, not fearing the blame of the blamer for the sake of Allah, believing in Allah (swt) and His Messenger, honest and sincere with His permission, Glory be to Him, until it succeeded, Allah willing, in making the Khilafah (Caliphate) a public opinion among Muslims, and a living demand for them despite all the misguidance of the Kuffar, their agents, and their cunning plans.

“They devised every plot, which was fully known to Allah, but their plotting was not enough to ˹even˺ overpower mountains ˹let alone Allah” [TMQ Ibraheem: 46]

Do not make this conference a copy of other similar conferences that were held in the past and then ended. Resounding slogans were raised in the conference such as “The liberation of the sacred is soon at the hands of the free believers” and “The conference is a starting point for achieving the unity of the Islamic Ummah under the banner of Islam,” while the conference title does not refer to a legitimate approach from Islam. Or even a plan to achieve the unity of the Islamic Ummah, and the title speaks of the available opportunities that the conferees can pursue, as well as the challenges that they must avoid. So can someone who applies the capitalist system led by America, which is fighting Islam and its people, which announced it with a clear slogan since 2001 in the war on Islam under the name of “terrorism”, can he unite Muslims and implement Islam?!

Those who call for the unification of Muslims must exert their efforts in calling to stop the bloodshed in the fighting of the sons of the Islamic Ummah among themselves and save that energy to fight the real enemies of the Kuffar. They must raise the banner of “La ilaha illa Allah (There is no god but Allah)” hovering over their heads and not cling to the republican system or its slogans, and work to cut off the hands of the Kuffar and their organizations…and expel the World Bank and the International Monetary Fund and reject the explicit interest-based loans offered by them, and they must appeal to Islam, not to the United Nations, the international system and the American envoy regarding Yemen.

The method of the Messenger of Allah (saw) in establishing the Islamic state and ruling by what Allah has revealed is clear and unambiguous, and does not change with the change of place or time. It began with the call to Islam and ended with the establishment of the state in Medina. It emerged in three stages represented in the creation of a group that takes the Islamic faith as an intellectual base and an intellectual leadership, is aware of the ideas and rulings of Islam, and does not take a method other than Islam to achieve the establishment of the Islamic state. This is what the Prophet raised up his companions in Mecca in the house of Al-Arqam bin Abi Al-Arqam, may Allah be pleased with him, and Islamic personalities emerged from it. And then engage in an intellectual struggle to confront all the ideas of Capitalism that are intruding upon us today, expose and clarify them and put the ideas of Islam in their place, and a political struggle to expose the conspiracies of the Kafir West that are being hatched today, as yesterday, against Islam and Muslims, and asking for support from the people of power from the Muslims, then taking over the rule to establish the Islamic state for governance with Islam, then include all the Islamic countries under the banner of Uqab, the banner of Muhammad (saw).

And know that Allah, Glory be to Him, exposes those who call for the implementation of Islam in the Western way under the pretext of moderation, who claim to work on the arbitration of Islam and the unification of Muslim countries with actions that avoid the truth and what is right.

The capitalist West, headed by the criminal America and the cunning Britain, will continue to play various cards to prevent the emergence of the truth, until Allah authorizes its emergence and descends its victory and support on the honest Muslims. Hizb ut Tahrir – the pioneer whose does not lie to its people – invites you to establish the second Khilafah Rashidah (rightly-guided Caliphate) State upon the method of the Prophethood. He (saw) said: «ثُمَّ تَكُونُ خِلَافَةً عَلَى مِنْهَاجِ النُّبُوَّةِ»“Then there will a Khilafah (Caliphate) upon the method of Prophethood” [Narrated by Ahmad by An-No‘man ibn Basheer (ra)]. Allah also said:

“O believers! Respond to Allah and His Messenger when he calls you to that which gives you life.” [TMQ Al-Anfal: 24].