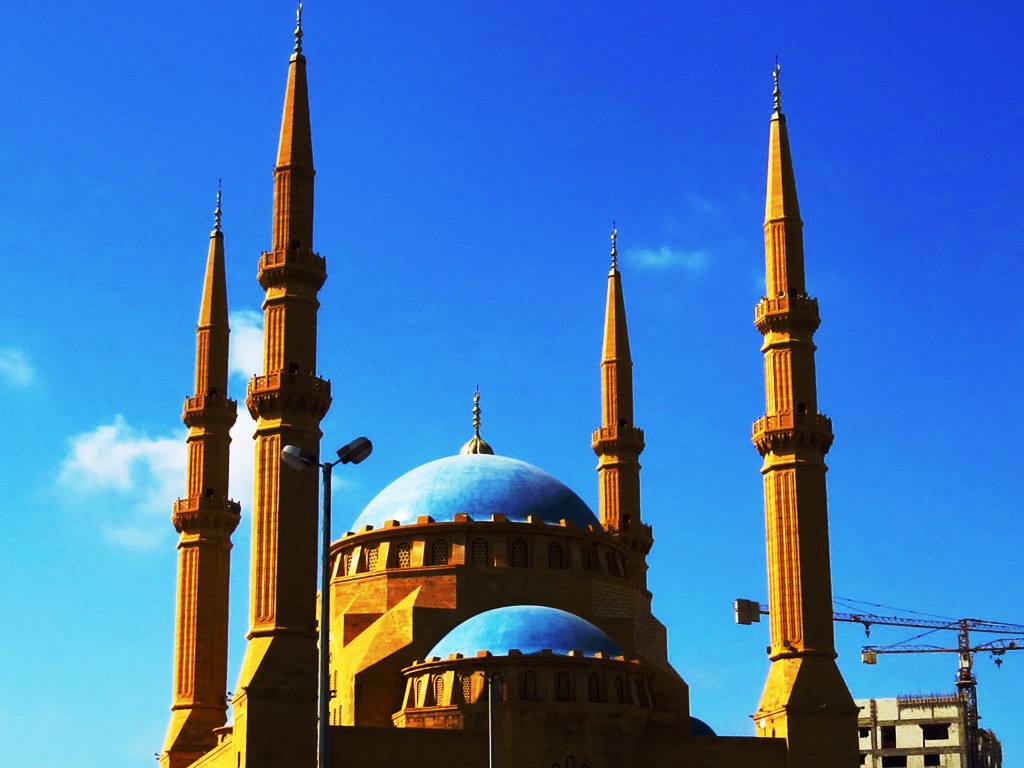 Discard the Human Fraternity Document, Its Dependencies, And What Is Built On It

Under the guidance of the Grand Mufti Sheikh Abd al-Latif Darian, the General Directorate of Religious Endowments called unto imams and mosque preachers to make Du’a to Allah (swt) after the ‘Asr prayer tomorrow, Thursday 14/05/2020 in all mosques in Lebanon to lift the epidemic and calamity that has befallen the world due to the Coronavirus pandemic. This call was done according to the Human Fraternity Document signed by Sheikh Al-Azhar, Dr. Ahmed Al-Tayeb and Pope Francis, Pope of the Vatican, in Abu Dhabi, capital of the United Arab Emirates, in February 2019. (National Information Agency 5/13/2020).

To the people of Islam in Lebanon, especially the clerics, scholars and Imaams of the masajid and Khutabaa’

Such a request, on the basis of this Document and its contents, is a dangerous request in several respects:

First: Equating Islam, the true religion of Allah and the seal of the divine messages with all religions, some of which were divine in origin, then corrupted, and others that are pagan! And the assumption that Islam can be compatible with other religions – especially with Catholicism with which the Sheikh of Al-Azhar signed the “Human Fraternity Document” – on one perception at solving the world’s problems and bringing it to its desired goal in this life! Under headlines that are from the roots of the Western civilization and its culture, such as public freedoms and the concept of nationalism. Also, the phrase “fighting terrorism” was repeated in the document without specifying the definition of terrorism, but rather by hinting, or declaring, that terrorism to them is Islam and its people!

Secondly: For this document upon which the call of the mufti was built, to call all the followers of religions as believers without distinction, and the significance of faith is limited to the inter-religious aspect that is the recognition of the existence of the Creator, glory be to Him! While Islam determines an unquestionable truth, which is that faith in its view is “faith in Allah, His angels, His Books and His Messengers and the Last Day and Destiny (Qadr), and therefore he is not a believer in the eyes of Islam who says: God is Christ the son of Mary, nor who says: God is the third of three, and whoever disbelieves in the prophethood of Muhammad, peace and blessings be upon him and his family, and the Qur’an, as a Book from Allah the Almighty.

Thirdly: The relationship between the holders of different ideas and religions is not based on searching for common grounds among them and to stand at this point, to compliment each other, and to tell people we agree on many issues, while the truth is that they are different in the foundations and in the core issues. Rather, the origin of this relationship is for each of them to present their beliefs and ideas, referring to evidences and mental proofs, in order to prove the truth… Accordingly, the origin in the relationship of Muslims with other people, out of concern and sincerity for them, is to invite them all, without any form of coercion, to Islam as the message of Allah Almighty, the conclusion of previous messages. Allah (swt) says: قُلْ يَا أَيُّهَا النَّاسُ إِنِّي رَسُولُ اللهِ إِلَيْكُمْ جَمِيعاً الَّذِي لَهُ مُلْكُ السَّمَاوَاتِ وَالْأَرْضِ لَا إِلَهَ إِلَّا هُوَ يُحْيِي وَيُمِيتُ فَآمِنُوا بِاللهِ وَرَسُولِهِ النَّبِيِّ الْأُمِّيِّ الَّذِي يُؤْمِنُ بِاللهِ وَكَلِمَاتِهِ وَاتَّبِعُوهُ لَعَلَّكُمْ تَهْتَدُونَ “Say [O Muhammad]: “O mankind! Verily, I am an apostle of God to all of you, [sent by Him] unto whom the dominion over the heavens and the earth belongs! There is no deity save Him; He [alone] grants life and deals death!” Believe, then, in God and His Apostle-the unlettered Prophet who believes in God and His words-and follow him, so that you might find guidance” [Al-A’raaf: 158]. And He (swt) also says:  وَمَنْ يَبْتَغِ غَيْرَ الْإِسْلَامِ دِيناً فَلَنْ يُقْبَلَ مِنْهُ وَهُوَ فِي الْآَخِرَةِ مِنَ الْخَاسِرِينَ “If anyone desires a religion other than Islam (submission to Allah), never will it be accepted of him; and in the Hereafter He will be in the ranks of those who have lost (All spiritual good).” [Al-i Imran: 85]. And this is the exact meaning that this verse of Allah (swt) referred to: قُلْ يَا أَهْلَ الْكِتَابِ تَعَالَوْا إِلَى كَلِمَةٍ سَوَاءٍ بَيْنَنَا وَبَيْنَكُمْ أَلَّا نَعْبُدَ إِلَّا اللهَ وَلَا نُشْرِكَ بِهِ شَيْئاً وَلَا يَتَّخِذَ بَعْضُنَا بَعْضاً أَرْبَاباً مِنْ دُونِ اللهِ فَإِنْ تَوَلَّوْا فَقُولُوا اشْهَدُوا بِأَنَّا مُسْلِمُونَ “Say: “O People of the Book! come to common terms as between us and you: That we worship none but Allah; that we associate no partners with him; that we shall not ascribe, from among ourselves, Lords and patrons other than Allah.” And if they turn their backs (from accepting this call), tell them: ‘Bear witness that we are the ones who have submitted ourselves exclusively to Allah.’” [Al–i Imran: 64].

Fourthly: The Islamic creed prohibits Muslims from reconciling their religion with any of the other religions, because according to Muslims, Islam is the religion of truth and none other. Allah (swt) says: إِنَّ الدِّينَ عِنْدَ اللهِ الْإِسْلَامُ وَمَا اخْتَلَفَ الَّذِينَ أُوتُوا الْكِتَابَ إِلَّا مِنْ بَعْدِ مَا جَاءَهُمُ الْعِلْمُ بَغْياً بَيْنَهُمْ وَمَنْ يَكْفُرْ بِآَيَاتِ اللهِ فَإِنَّ اللهَ سَرِيعُ الْحِسَابِ * فَإِنْ حَاجُّوكَ فَقُلْ أَسْلَمْتُ وَجْهِيَ لِلهِ وَمَنِ اتَّبَعَنِ وَقُلْ لِلَّذِينَ أُوتُوا الْكِتَابَ وَالْأُمِّيِّينَ أَأَسْلَمْتُمْ فَإِنْ أَسْلَمُوا فَقَدِ اهْتَدَوْا وَإِنْ تَوَلَّوْا فَإِنَّمَا عَلَيْكَ الْبَلَاغُ وَاللهُ بَصِيرٌ بِالْعِبَادِ “The Religion before Allah is Islam (submission to His Will): Nor did the People of the Book dissent therefrom except through envy of each other, after knowledge had come to them. But if any deny the Signs of Allah, Allah is swift in calling to account. * So if they dispute with thee, say: “I have submitted My whole self to Allah and so have those who follow me.” And say to the People of the Book and to those who are unlearned: “Do ye (also) submit yourselves?” If they do, they are in right guidance, but if they turn back, Thy duty is to convey the Message; and in Allah’s sight are (all) His servants.” [Al–i Imran: 19-20]… Equalizing between Islam and any religion, whatever it be, is a dangerous heresy that was not dared in Islamic history, neither by a Muslim ruler nor a scholar of Sharia. It is not the right of any human being in the world to remove the dividing lines that distinguish Islam from other religions. Allah (swt) says:وَلَا تَلْبِسُوا الْحَقَّ بِالْبَاطِلِ وَتَكْتُمُوا الْحَقَّ وَأَنْتُمْ تَعْلَمُونَ  “And cover not Truth with falsehood, nor conceal the Truth when ye know (what it is).” [Al-Baqara: 42]. The Qur’an also distinguished Islam from all other religions, Allah (swt) says:لَكُمْ دِينُكُمْ وَلِيَ دِينِ  “To you is your religion, and to me, my religion.” [Al-Kafiroon: 6].

He (swt) also made the Shari’ah (law and way of life) of Islam an abrogation for all previous prophets’ Shara’i (laws and ways of life). Allah (swt) says: وَأَنْزَلْنَا إِلَيْكَ الْكِتَابَ بِالْحَقِّ مُصَدِّقاً لِمَا بَيْنَ يَدَيْهِ مِنَ الْكِتَابِ وَمُهَيْمِناً عَلَيْهِ فَاحْكُمْ بَيْنَهُمْ بِمَا أَنْزَلَ اللَّهُ وَلَا تَتَّبِعْ أَهْوَاءَهُمْ عَمَّا جَاءَكَ مِنَ الْحَقِّ لِكُلٍّ جَعَلْنَا مِنْكُمْ شِرْعَةً وَمِنْهَاجاً وَلَوْ شَاءَ اللهُ لَجَعَلَكُمْ أُمَّةً وَاحِدَةً وَلَكِنْ لِيَبْلُوَكُمْ فِي مَا آَتَاكُمْ فَاسْتَبِقُوا الْخَيْرَاتِ إِلَى اللهِ مَرْجِعُكُمْ جَمِيعاً فَيُنَبِّئُكُمْ بِمَا كُنْتُمْ فِيهِ تَخْتَلِفُونَ “To thee We sent the Scripture in truth, confirming the scripture that came before it, and guarding it in safety: so judge between them by what Allah hath revealed, and follow not their vain desires, diverging from the Truth that hath come to thee. To each among you have we prescribed a law and an open way. If Allah had so willed, He would have made you a single people, but (His plan is) to test you in what He hath given you: so strive as in a race in all virtues. The goal of you all is to Allah. it is He that will show you the truth of the matters in which ye dispute;” [Al-Ma’idah:48].

Fifthly: As for those who speak about the issue of tolerance, Islam has given the greatest and most wonderful example in human history in tolerance for non-Muslims. The Islamic Sharia has placed laws to allow Muslims and people of other religions to live together under a system that takes care of human affairs as humans, so it does not distinguish in caring for affairs between a Muslim and a non-Muslim, while preserving the privacy of the people of other faiths. It prohibits Muslims from compelling other people to convert to Islam. Allah (swt) says: لَا إِكْرَاهَ فِي الدِّينِ “There is no compulsion and coercion in regard to religion” [Al-Baqara: 256], and they were forbidden from preventing the people of other faiths from practicing their rituals, and left them to abide by the provisions of their religions in personal status, food and clothing within its general system, and did not obligate them with what Muslims were obliged in this field, so the people of other religions took care of their temples and ate and drank what the Islamic law prohibited for Muslims throughout the eras of the Islamic state.

O Scholars, O Sheikhs, Imams and Preachers: Your responsibility was, and still is, greater than the general responsibility of Muslims, and it goes beyond denial of Munkar by heart. The scholars are the heirs of the prophets as we were told by our Messenger ﷺ. The word of a scholar has the greatest impact on the souls of believers, so those who have announced such a declaration, that is, the call for a common supplication, under the authority of this document that is contrary to the nature of Islam’s relationship with other religions, should not have made this mistake. It is indeed sad that this document is established in the name of the so-called Muslim Scholars Organization, the majority of which are scholars specializing in Sharia and Islamic studies.

Our dear Scholars: The guidance of the Messenger (peace be upon him) is enough for us as advice and guidance, for the best of guidance is the guidance of the Messenger (peace be upon him) and with it we will end, he (peace be upon him) said: «أَلا لا يَمْنَعنَّ أحدَكُم رَهْبةُ النّاسِ أّن يَقولَ بِحقٍّ إذا رآه أَو شَهِدَه، فَإنَّه لا يُقرِّبُ مِن أَجلٍ، ولا يُبَاعدُ مِن رزقٍ أَن يَقولَ بِحقٍ أو يُذكِّرَ بعظيمٍ» “Let not fear of the people prevent one of you from saying the truth, if he sees or witnesses it, as speaking the truth or reminding of a great matter, does not bring death closer, nor distance from provisions (rizq).” (reported by Ahmad)