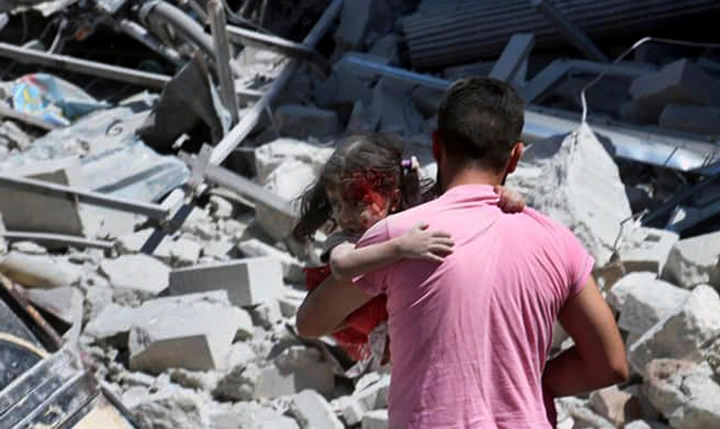 Save the ship of your revolution before it is too late, the destruction has widened

Save the sacrifices made and the blood of your martyrs before they are sold at the criminality and political immorality bazaars in Geneva, Astana and Sochi

Now you see with your own eyes what became of our situation, and see the danger that threatens us, and the unknown that awaits us, unless we rectify our situation and adhere to our constants, hold tight to the rope of our Lord and act according to His command and seek to implement His law.

The plots and conspiracies, as you can see, have surrounded us from all sides and from those near and far who have gathered against us leading to killings, displacement and destruction, accompanied by truce, conferences, negotiations, and so on, to eliminate all sincere  work carried out by our loyal sons, to return us in the end if they could to the fold of the criminal regime to rule us with Kufr (disbelief) and to subject us – as previously – to varieties of injustice, aggression and oppression.

So do we accept that the blood of the martyrs is sold and the sacrifices go to waste due to our silence and inaction or to be as commanded by our Lord, to be men who proclaim the truth and uphold it, and carry out what Allah has commanded them, to enjoin the good and forbid the evil, and stop every oppressor and “trader” who joined our enemies or conspired with them? If we carry out what Allah (swt) ordered, we will hold, as we were informed by our noble Prophet (saw), the status of the master of martyrs Hamza bin Abdul Al-Muttalib. But if we remain in silence and inaction then the danger that awaits us is great.

And you see with your own eyes how our enemies are bombing our towns and villages, destroying and killing to make us agree to the decisions of their conferences and the mirage of their false security, that they boast as a favour to us. And now at the new Astana conference, they want to impose what they previously agreed to, the buffer zone and a comprehensive truce that would enable them to confine the loyal revolutionaries to a narrow, limited area, which is a new step to eliminate them.

We are your brothers in Hizb ut Tahrir, the frontrunner that does not lie to its people: we address you like brothers who advise you for the good in which is the pleasure of our Lord and the best of our matter.

We call on you to regain your decision and your authority, which has been robbed of you by injustice and domination, and to carry out the duty of enjoining the good and forbidding evil and to stop the oppressor and everyone who wants to trade our sacrifices and the blood of our sons in the market of truces and conferences.

We invite you to work hard, you and those around you, to support the great project of Islam, the project of the Khilafah Rashida (righteous Caliphate) on the method of Prophethood. In it alone is our glory and our victory in this world and the Hereafter; it is the only one capable of eliminating our division and uniting our ranks and correcting our course to achieve real security and genuine liberation from injustice and oppression that we suffer and experience. Our solution is in our own hands not in the hands of regional states, America’s tools and tails in our lands.

Our enemies have gathered to eliminate us and we cannot survive unless we hold on tight to the rope of our Lord. And each one of us should carry out his role, and do his best to gather those around him from his family and brothers, so that everyone acts as one unit,  to regain our authority and correct our course, and be a barrier  that rejects the decisions of the treacherous conferences and their deadly truce, and to be an effective force to break free from the constraints of the “supporters”, and break their red lines…

We invite you to take the positions of the men of men that please your Lord and is befitting to you, like Saad bin Moaz and Saad bin Ibada and other men who were truthful in their covenant with Allah. Let not one of us say, “We have no power and we cannot do anything” because this is a dangerous matter. The plots are great, and we are all in one boat, either we all perish or all survive.

Changing the regime of the tyrant and establishing the rule of Islam is the duty of every Muslim. We must continue to do so until we achieve the desired goal, Allah willing, and it is wrong to stand in the middle of the road to search for compromises, otherwise the fate is dark, and what happened in Egypt and Tunisia is a lesson for those willing to learn.

Beware of the cunning of your enemies, reject the decisions of their conspiratorial conferences, stop those who stole your authority from you, and confiscated your decision and traded with your suffering, and question them always and at every action and entitlement; as the people who have rights, and hold them to account (and what about the overthrow of the regime?) And listen to the advice of your brothers and be in the state Allah wants you to be in; in that is where you find your victory success and liberation.

“O you who have believed, respond to Allah and to the Messenger when he calls you to that which gives you life. And know that Allah intervenes between a man and his heart and that to Him you will be gathered”
[Al-Anfal: 24]