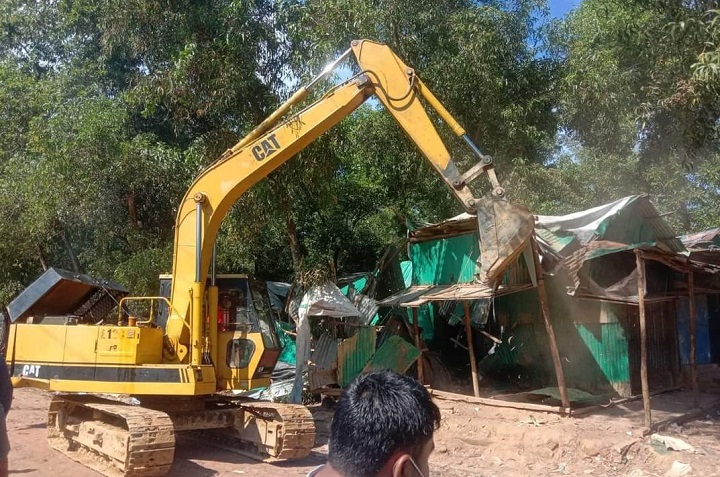 The authorities of Hasina government have recently bulldozed more than 3000 shops of the Rohingya Muslims in Kutupalong refugee camp in Cox’s Bazar district, leaving the helpless refugees without sources of income and daily necessities. And these demolitions were carried out within days of a massive fire that broke out in that refugee camp that left thousands homeless. Even, prior to this demolition, on December 13, 2021, the government’s Refugee Relief and Repatriation Commissioner closed down thousands of the community-based and home-based schools for Rohingya refugee children within the refugee camps due to which approximately 30,000 children lost their access to education. It is obvious that the criminal regime will not let allow the Rohingya Muslims to become self-reliant. They want the refugees to be dependent on the foreign aids to survive. As the international financial assistance is declining for the Rohingya refugees, this criminal government is exacerbating their existing sufferings. The Rohingya crisis has already brought the government huge financial benefit in terms of aid and grant, the majority of which never goes to the poor refugees. For these secular-capitalist rulers, more crisis means more money. These rulers never shoulder a responsibility, for they perceive no obligation to protect the life and wealth of human beings – they view everything from the prism of benefit.

And the condemnation over the Rohingya humanitarian crisis by the Western powers bears no meaning. In their lands, they also exploit the misery of the Muslim refugees to fulfil their economic interests. For the other countries, in fact, they tacitly allow this crisis to perpetuate as it offers a pretext to interfere into their affairs. Otherwise, how can our Western puppet regime dare to destroy the livelihood and educational opportunities of the Rohingya Muslims immediately after the visit of the UN Special Rapporteur on Human Rights in Myanmar Tom Andrews who asked the Hasina government to ensure security and livelihood opportunities during his trip.

O People of Bangladesh! We can never remove the sufferings of the Rohingya Muslims unless we get rid of the secular ruling system along with the cruelest of rulers it produces. Allah Azza Wa Jal made this obligatory to help the Muslims in need:

But Hasina government does not bother to violate the command of Allah (swt) as it does not represent Islam and the Ummah. These criminals are making the lives of the Rohingya worse and worse every day instead of giving them relief from their plight.

O People of Wisdom and Foresight! Look back on the history of the nations and see if you find any other entity other than the Khilafah (Caliphate) that sincerely looked after the affairs of the humanity? Even the most hated Jews sought and found peaceful refuge under the Othmani Khilafah (Ottoman Caliphate) when Sultan Bayezid II rescued them with his navy while they were fleeing the Spanish Alhambra Decree in 1492. So, strive hard to bring back the Khilafah Rashidah (rightly guided Caliphate) State upon the method of the Prophethood. There is no other solution other than reestablishing the Khilafah to save the humanity from the tyranny of secularism.