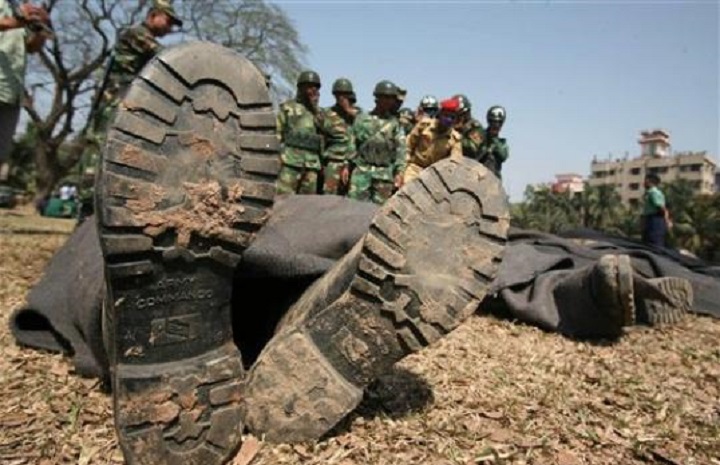 This February 25th (Friday) marked the 13th anniversary of the tragic Pilkhana carnage. On that day in 2009, we helplessly witnessed the brutal massacre of the 57 brave army officers at the Pilkhana headquarter of the then Bangladesh Rifles (BDR). Naturally, we never expect justice from the Hasina regime which had collaborated in that brutal slaughtering of our brilliant sons to give India the upper hand. After that mutiny, this US-UK ploy to weaken our military became clear as daylight with the subsequent conspiracies of the Hasina regime against the military.

This great conspiracy against our armed forces began in 2008 when the compromise between US and UK helped install the Hasina regime. As part of its “Pivot to Asia” strategy to contain China and prevent the imminent return of the Khilafah (Caliphate), the US has been supporting the rise of India as a regional power by offering her packages of political and economic. And the UK naturally supported this strategy that gave her loyal agent the upper hand over Bangladesh’s armed forces. Thus, the Pilkhana massacre was carried out by the traitorous Hasina regime under this shared geopolitical framework of the US-UK.

Sadly, this year people in Bangladesh are mourning the victims of the Pilkhana mutiny in the Hijri month of Rajab when globally the Ummah is also observing the painful 101st anniversary of the destruction of the Khilafah in 1342 AH – 3rd March 1924. Perpetrators of both the tragedies are of the same kind – the treacherous rulers in the Muslim lands. Hasina’s treachery in backstabbing our powerful military carries the legacy of the traitor Kemal Ataturk who also collaborated with the Colonialist Kuffar to dismantle the mighty Uthmani (Ottoman) Khilafah State. Such treacherous secular rulers are always appointed by their colonial masters to ensure the subjugation of the Ummah.

O Sincere Officers of the Military! You possess the key to power and yet you have spent 13 years without avenging the death of your martyred brothers! Your passivity towards the regime’s betrayal against the armed forces is taking you down the road of ignominy. Your silence has given this regime confidence to turn you into a cheap and docile force that is being used as fuel for the interests of the Kafir-mushriks. We, in Hizb ut Tahrir / Wilayah Bangladesh, call upon you to rise from this disgrace and assume a courageous stance in order to restore your might and dignity. Reject the obedience to the treacherous Hasina regime that is collaborating with the enemies of Islam and the Muslims to make you subservient to them in a humiliated manner. Support Allah (swt) and His Messenger (saw) by granting nussrah (material support) to Hizb ut Tahrir to bring back the promised Khilafah Rashidah (rightly guided Caliphate) on the method of Prophethood. March forth to support this Deen, and make this Rajab the last to end the hundred years of disgrace and weakness.

“O you who believe, respond to Allah and the Messenger when He calls you to what gives you life.” [Surah Al-Anfal: 24].