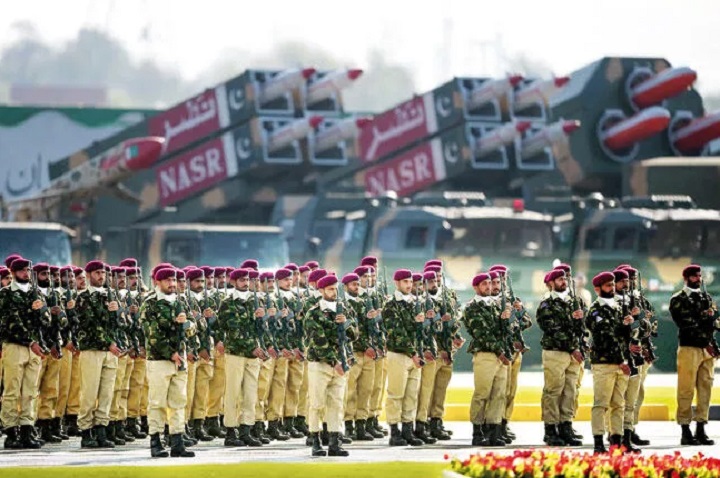 The global power structure today is in a state of flux, with new alignments of power and alliances taking shape across the globe and where the West stands dethroned from its position of leadership in the world. At the same time the Muslim Ummah is bubbling with resurgence of Islamic fervour and a bulging youth population desiring change – the time for decisive action to establish a new world order in the form of an Islamic Khilafah state is now.

It is your duty to see that ruling by Islam is manifested, to see that the second Khilafah-e-Rashidah (rightly guided Caliphate) is established, that Allah’s (swt) Ahkam (rulings) in all matters are applied and fulfilled across society. To enable this, Hizb ut Tahrir has prepared the blueprint for such a state and has explained in elaborate depth how such a system will function across its various departments; economic, judicial, social, ruling, etc. and has readied many capable, sincere and learned Muslims to shoulder this responsibility, in Pakistan and across the Muslim world.

In light of this, we in Hizb ut Tahrir call you, the officers in Pakistan’s military, to respond and step forward to fulfil your Islamic obligation, just as the leaders of the Aws and Khazraj tribes in Medina were called upon and responded by stepping forward to aid the Messenger (saw) in establishing the first Islamic state and in doing so became the Ansar (helpers).

Practically it is upon you now to give your allegiance and physical support (Nusrah) to Hizb ut Tahrir, so that the Khilafah may practically be re-established in the Ummah, with Pakistan as its starting point, without delay. In doing so, Islam must continue where it left off, as a grinding wheel countering the kufr and oppressive order that exists in the world, as the haq that clashes with the batil, and with Allah’s (swt) will, always overcoming it and dominating it.

“Truth has come and falsehood has vanished. Falsehood is surely bound to vanish.” [Al-Isra 17:81]

Specifically, we in Hizb ut Tahrir convey to you three messages so that you may take heed and benefit yourself in this life and the next:

First – That the suffering, cries, oppression that continue unabated upon the weak, defenceless, poverty stricken and the like in this Ummah is upon your shoulders.

You are responsible for their pain. You are accountable for their anguish. This matter is at your doorstep, at your feet. It is your problem and you will be directly answerable for it. Because you have the actual means to stop their suffering, and as long as you do not proceed to do so, the blame of their fate lies with you as you choose inaction over action.

“So fight them and Allah will punish them at your hands, put them to shame, help you overcome them, and soothe the hearts of the believers.” [At-Tawbah 9:14]

Second – That Allah’s (swt) punishment is imminent upon you if you do not respond.

“Is not the time ripe for the hearts of those who believe to submit to Allah’s reminder and to the truth which is revealed, that they become not as those who received the scripture of old but the term was prolonged for them and so their hearts were hardened, and many of them are evil-livers.” [Al-Hadid 57:16]

If you do not take heed of Allah’s (swt) commands, then take notice that Allah (swt) will wipe you away and replace you with a people who not only believe but respond to His call as well; this is ever easy for Allah (swt).

“If you march not forth, He will punish you with a painful torment and will replace you by another people; and you cannot harm Him at all, and Allah is Able to do all things.” [At-Tawbah 9:39]

Do not doubt for a second that Allah (swt) can plunge great mountains crushing down upon you, or send the tiniest of life forms into your lungs to take your very breath away. It is ever easy for Allah (swt).

Without question you are at a critical crossroad with a very heavy decision that you must make before you. It will indeed drastically determine the path for your future life in this world. But most important of all, it will decide the path you take in your next life, where you will abide for all eternity. So your decision must be made in the best interest of your Afterlife, not just this short temporary life. You must see beyond the many allusions of this life; the desire to gain property, to compete in business interests, to increase your wealth, to grow your posterity – all of which are nothing but a distracting enjoyment.

“O my people! Truly, this life of the world is nothing but a (quick passing) enjoyment, and verily, the Hereafter that is the home that will remain forever.” [Ghafir 40:39]

You must reflect on your belief to give your vision clarity. Your conclusion must be that you, as Muslims answerable to Allah (swt), choose to obey none but your Creator, casting aside your superiors who command you in the disobedience of Allah (swt) by confining you to a cog upholding the kufr world order, which unleashes nothing but destruction upon the populations of this world, Muslim and non-Muslim alike.

“They will say: “Our Lord, we obeyed our chiefs and our great ones, and they turned us away from the Right Way.” [Al-Ahzab 33: 67]

Third – Lastly, as way of inspiration, we convey to you from the great Sahabah Ayub Al Ansari (ra) – the Sahabah who was blessed and honoured by being the one whom Prophet Muhammad (saw) resided with in Medina after the hijrah.

He died as a very old man all the way outside the gates of Constantinople (Istanbul) where he is buried, capital of the then Eastern Roman Byzantine Empire, one of the world’s superpowers that the early Khilafah defeated. Even at such an old age he did not rest nor was he content to sit in Medina, but rather he accompanied the Muslims in their far reaching military campaigns to liberate new lands and expand the domain of Islam. As he was passing away, he requested the soldiers to push forward as far as possible and bury him at the gates of Constantinople and to then give his salaam to the Muslim armies. It is this greeting from Ayub Al Ansari (ra), one of Prophet Muhammad’s (saw) closest and dearest companions, that we pass onto you, the formidable Muslim armies of today; “As-Salamu ‘Alaikum wa Rahmatullahi wa Barakatuhu”, (May the peace and blessings of Allah (swt) be upon you).