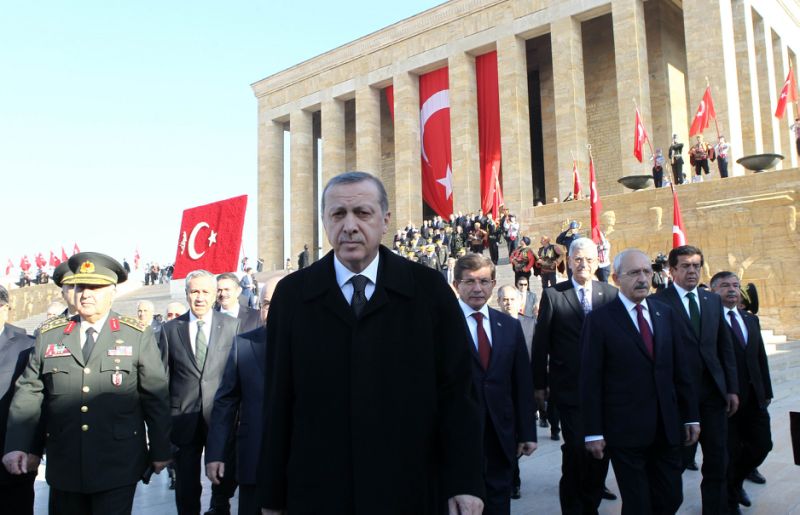 On the 84th anniversary of the women’s suffrage in Turkey, the minister of Family, Labor and Social Services Zehra Zümrüt Selçuk visited the mausoleum with female deputies, reeves, bureaucrats, academicians and female representatives of non-governmental organizations.

Minister Selçuk wrote the following in the notebook: “Dear Ghazi Mustafa Kemal Atatürk, we celebrate the 84th anniversary of the women’s suffrage with a great pride, which is a turning point in terms of our women’s participation in the political, economic and social life.” (A.A 05/12/2018)

By looking at the saying ‘the war will be lost when you look like the enemy, not when you die’, we unfortunately witness these facts every day in different ways. Muslim children who are raised under the domination of the capitalist culture, are unaware of their values and measures, their minds get dirty by the popular culture created by capitalism and their behaviours become crooked. When yesterday’s individuals who got education under the siege of this culture started to show up in democratic politics, we see that they set the last crumbs remaining from their beliefs and values aside. Especially, if these persons were put into some positions, they could make all kind of concessions in order to protect what they own. There is no difference between being a woman or man regarding those who exhibit these behaviours. But the fact that especially women are a part of this subversion leads to the following, namely that they bring this evil path to a wider and more daring point. The visit to the mausoleum by Minister Zehra Zümrüt Selçuk and the women accompanying her, and their efforts of turning this visit into a boast and pride, could not be explained by mind. This situation turns the conservative politicians who try to steal a role from the Kemalists, into conservative Kemalists at the utmost.

Seeking health at the mausoleum in order to appear modern and civilized and for their (conservative politicians) diseased frames of mind is a disgrace to put it mildly. Especially the fact that it is pioneered by the women who wear a headscarf which is a symbol of Islam, is far more heartbreaking and overwhelming. What kind of a contribution did those who abolished the Khilafah and established the republic instead, make to the well-being and power of Muslims, so you feel indebted to and thank them?

What kind of gratitude do you feel towards the pioneer of the mentality who tries us to admire our enemy the West, that declared a total war against this society’s alphabet, clothes, belief, tradition, etc., caused the cultural degeneration, tried to alienate it from its belief and values and turned it against its glorious and honourable past, so you show this carelessness in Muslims’ face? Moreover, to the leader of the mentality, who commodified the woman, values and even religion as you know.

Apparently, being more Ataturkist than republican people’s party members, protect, appreciate and honour his principles and reforms, became the policy and custom of the AK Party camp, and the President in particular. Concepts like laicism, republic and democracy that were not mentioned in the past by the Muslims, became normal by the tongue of the political power. The government which wasn’t satisfied with this, has reversed the compass of Muslims, who support them with their praise regarding Atatürk and his principles. The visits and honours realized only on the so-called holidays before, have been taken a step further now and realized on the dates of the revolutions. And where this course will end, couldn’t be estimated.

Those who are unable to shape the world and afraid of reading the world with the Islamic culture, try to cover their insufficiency with the so-called modern, rather western culture. How else could the reference to rights, justice and modernity by hiding behind the figures and mentalities who declared war against their belief, values and tradition be explained?

This Ummah has suffered from the leaders and parties who seem one of them but work with their enemies, as it always has been the case. Muslims have to remember the limits set by their Lord, and shouldn’t transgress them and shouldn’t allow them being transgressed out of respect for any democratic leader and party. Someone’s investments and interests with regard to the elections shouldn’t make us the supporters of this sin. Erdoğan’s evil paths are being widened much faster and determinedly by his followers.

“Whosoever introduces a good practice in Islam, there is for him its reward and the reward of those who act upon it after him without anything being diminished from their rewards. And whosoever introduces an evil practice in Islam, will shoulder its sin and the sins of all those who will act upon it, without diminishing in any way their burden.” (Muslim, Zakat 69. Nasa’i, Zakat 64)