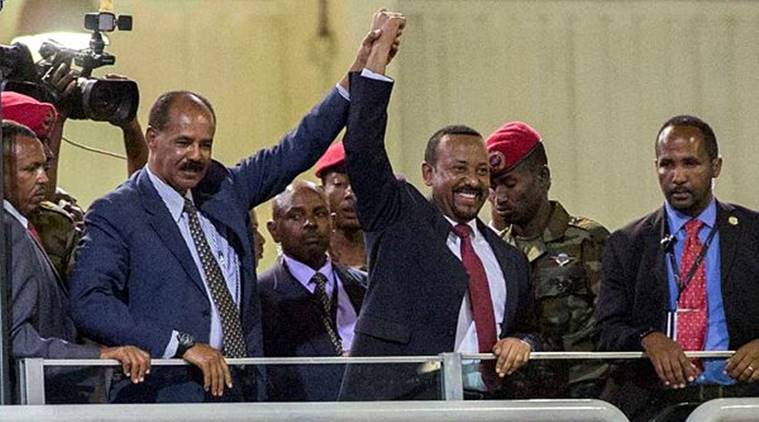 At a summit on 9 July 2018 in Asmara, Eritrea’s President Isaias Afwerki and Ethiopia’s Prime Minister Abiy Ahmed signed a “Joint Declaration of Peace and Friendship” deal. The signed accord is summarized as follows:

First, the state of war has ended,

Third, the trade, economic and diplomatic ties will resume,

Fourth, the boundary decision will be implemented and

Fifth, the regional peace will be prioritized by both nations.

The agreement comes after a two decade (1998 – 2018) of protracted struggle between the two nations. Their struggle was colonial-instigated since Ethiopia was under the British rule then later maneuvered and became an American puppet. Britain instigated the struggle for Eritrea’s secession from Ethiopia and in 1993; it was officially granted independence and joined the United Nations but remained an archenemy to Ethiopia. America on the other hand was determined to ensure that Eritrea is in good terms with Ethiopia since it is an important gateway to its other puppet regimes neighboring Eritrea in the Horn of Africa and Red Sea.

This latest developments are coming at a very crucial time when America is engaged on an outright Trade War with China and European Union. Therefore, America wants to resolve pertinent issues in Africa, portray itself as the Global authority, and ultimately concentrate on the latest 21st Economic-War. America seeks:

First, to revamp the image of the Ethiopian regime which was filled with oppression and dire living conditions for its citizens. By prevailing upon the former Prime Minister Hailemariam Desalegn to resign on 15 February 2018 and handed-over reins of power to the new Prime Minister Abiy Ahmed on 2 April 2018. In his acceptance speech, he was portrayed as a political reformist and promised to promote the unity of Ethiopia and the unity among the peoples of Ethiopia; to reach out to the Eritrean government to resolve the ongoing Eritrean–Ethiopian border conflict after the Eritrean–Ethiopian War and to also reach out to the political opposition inside and outside of Ethiopia. The citizens were pacified since their optimism was raised and in turn Abiy Ahmed received an overwhelmingly positive reaction from the Ethiopian Public including the opposition groups both in and out of Ethiopia.

Second, to provide an economic boost for Ethiopia in order to stabilize and quell the protests that highly involved the youths in which almost 50% of Ethiopia’s population is under the age of 18 years, which almost paralyzed the Ethiopian regime under the former Prime Minister. Ethiopia as a landlocked country whose economy is highly dependent on agricultural export urgently needed an agreement with Eritrea so that it may have access to the extensive coastline of Red Sea as a gateway to Global trade partners especially US-sanctioned companies.

Third, to provide a regional platform for Ethiopia’s Prime Minister Abiy Ahmed to influence regional issues sanctioned by American policies such as:

a) Counter-terrorism initiatives –Ethiopia has the region’s largest and most effective army and has been fighting al Shabaab since 2008. With Eritrea in good books with Ethiopia it is anticipated that the initiatives will be broadened-up and multifaceted to reorganize regional members specific roles; including that of Djibouti which host the largest US military base in Africa and which is also imperative to the Yemen campaign which the US is allied with Saudi Arabia in the fight against British allies from assuming Yemen’s leadership.

b) Counter-China’s influence in Africa as confirmed on Thursday 8 March 2018 the former U.S. Secretary of State, Rex Tillerson, on his first diplomatic trip to Africa, said that African countries should be careful not to forfeit their sovereignty when they accept loans from China. Tillerson also said that Chinese investments “do not bring significant job locally” and criticised how Beijing structured loans to African government.

Therefore, the latest developments between Ethiopia-Eritrea will see the two countries acting as another platform to realize the American interests by linking American-agent regimes to Eritrea.

The above confirm that both Ethiopia and Eritrea are subservient regimes being used to further colonial machinations across Africa for the benefit of their western masters. It is only under the Khilafah that genuine reconciliation will be realized for the betterment of Africa as a whole.