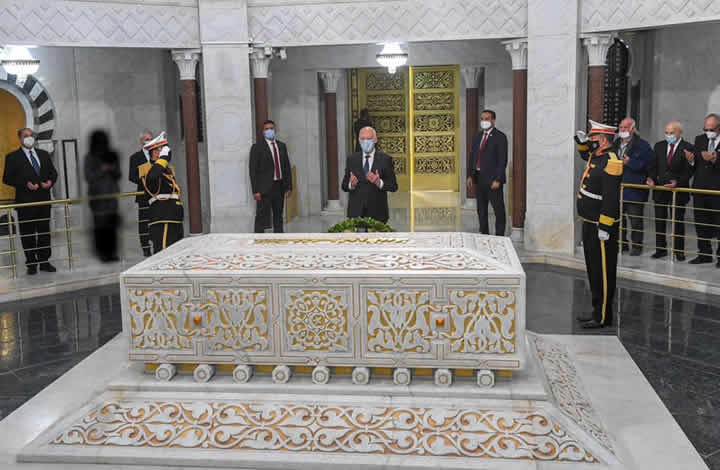 “They Wish to Refer Legislation to Taghut While They were Commanded to Reject it” [An-Nisa’: 60]

During his visit on Tuesday, 6/4/2021, to the tomb of former President Habib Bourguiba, President Kais Saied said, “I have sworn by the Qur’an to respect the constitution.” Then he praised Bourguiba, because according to him, he did not just liberate Tunisia but rather liberated the society, the minds and achieved an educational revolution that, at the beginning of the seventies, led to a change in Tunisian society in clothing, in behaviour, and in all aspects of life. Then he added: “I am a Muslim and proud of my Islam, but a Muslim who wants to achieve the objectives of Islam. The true Muslim does not lie, falsely accuse (others), does not swear or dishonour (others). If it was in my ability I would have written on every masjid and on every mosque “Say I believed in Allah and then I followed the straight path because the goal of Islam is being on the straight path, which is to get out of ignorance. But there are those who want to go back to ignorance in all its meanings.”

We in the Media Office of Hizb ut Tahrir / Wilayah of Tunisia want to highlight the following:

1. To give an oath to respect the man-made constitution that excludes Islam from ruling and legislation is considered a crime in Allah’s Deen, and it was the duty of President Kais Saied to swear to be a faithful guardian of a constitution based on the Qur’an and Sunnah, and not for a man-made constitution full of political mines and a tool for conflict and maneuver. Allah (swt) says:

“Then is it the judgement of [the time of] ignorance they desire? But who is better than Allah in judgement for a people who are certain [in faith]” [Al-Ma’ida: 50].

2. President Kais Saied contradicted himself when he showed his pride in Islam and its values and at the same time praised the former president, Habib Bourguiba, who fought Islam and openly contradicted the noble Qur’an, led the project of Westernization, established schools and universities based on the curricula of Western thought, canceled education in Zaitoona (Institute) and besieged its scholars, and imposed Western rules in governance, economics and social life under the slogan of building the modern nation state.

3. Islam is the Deen that Allah (swt) revealed to our master Muhammad (saw) to regulate man’s relationship with himself, his Lord, and other human beings. It is a comprehensive system of life, not just individual rulings or just intentions that a person interprets in accordance with his whims. Allah (swt) says:

“And whoever desires other than Islam as religion- never will it be accepted from him, and he, in the Hereafter will be among the losers.” [Al-i-Imran: 85].

4. President Kais Saied reminded us of the Hadith of the Messenger (saw):

“Say: I have believed in Allah, then follow the straight path.” And we have to wonder whether it is possible to talk about integrity in the sense of adhering to the true law of Allah, while the rulings of Islam are absent, its laws are canceled, and its Sharia is replaced by the law of man, that is, the law of ignorance?!

5. The slogan that the Tunisian people raised in the 17/12/2021 revolution against the Ben Ali regime was clear: “The people want to overthrow the regime,” in order to break away from the man-made regime in favour of a new regime that stems from its Islamic creed and not a system similar to that of the popular Republic.

“Have you not seen those who claim to have believed in what was revealed to you, [O Muhammad], and what was revealed before you? They wish to refer legislation to Taghut, while they were commanded to reject it; and Satan wishes to lead them far astray” [An-Nisa’: 60].