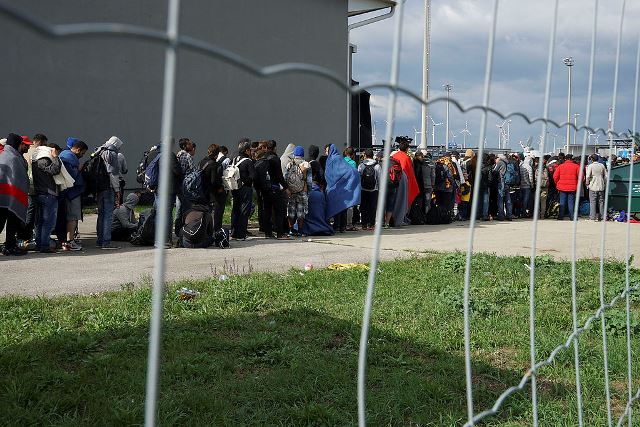 Everyone is talking about Germany. In the midst of the greatest migration of humanity since the Second World War, and as the world wept at the sight of Ayhan Kurdi’s tiny body on a Mediterranean beach, German leader Angela Merkel surprised Europe and the world when she announced that Germany would allow any Syrian who reaches Germany to claim asylum. This led a former French minister to go as far as to joke, “they took our Jews and gave us Arabs!”

As for Germans, they are talking about those who turned their backs upon their Syrian brothers. Stunning criticism of Saudi Arabia’s cynical attitude toward Syrian refugees appeared in the German paper: Frankfurter Allgemeine Zeitung, which published an article by Rainer Hermann on the 8th of September, 2015, titled: “The Arabian Peninsula Seals Itself Off” (“Flüchtlingskrise Die arabische Halbinsel schottet sich ab”).

Rainer Hermann’s words turned a knife through the dark heart of hypocrisy represented by Saudi Arabia and the Gulf regimes, and as that knife turned ever deeper, it pinned the regimes to a wall of shame that should sting every believer who watches the masses of exhausted and oppressed Muslims brave hardship, peril and indignity, with their backs to the countries that turned them out with nothing.

Hermann wrote that, “The Gulf States and Saudi Arabia turn a deaf ear to their fellow Muslims from the civil war” and he criticized a promise by Saudi Arabia to build 200 mosques for the Syrian refugees in Germany. His view was echoed by the militant atheist Richard Dawkins, who described the Saudi promise on his Twitter account as, “either a sick joke or sick insult to German generosity.”  While Dawkins has described all religions as harmful, Herman used skillfully the theme of religion to show the hypocrisy of rich Gulf states that “build the largest mosques, the tallest buildings and magnificent palaces”, while turning their backs to their “co-religionists from Syria.”  He contrasted the coldness of “the Custodian of the Two Holy Places of Islam” to the generosity of “many on the Christian continent.”

Of course, the generosity of “many on the Christian continent” is not universal. Hungary is racing to complete a wall that will block future migration through its territory, and a Hungarian camerawoman was filmed kicking and tripping over fleeing refugees including children in a depressing video that has gone viral on the social media sites. Politicians throughout Europe and in Germany have criticized Merkel’s decision as “the result of panic and muddled thinking,” and many of the trains that brought refugees through Europe have since been taken out of service.

Hermann’s article turned the knife again, but only after asking, “is this Arab brotherhood…” and quoting what some refugees said of the Arab states who deny visas – “I swear by Allah the Almighty, the Arabs are the disbelievers.” Saudi Arabia published some deceptive figures and weak excuses a few days after Hermann’s article, which were quoted in the shameful British press without any criticism. Perhaps Britain, which established today’s blood-stained borders and national flags for the filthy traitor princes, and those who followed them of rulers such as Bashar, did not want to offend the regime of Saudi Arabia for the scraps and leftovers of its former empire. Who can forget as we approach the Haj, that it was the former so-called “Sharif” of Mecca who was conspiring with the British against the Ottoman Caliphate at the bargaining stalls of shame, while Britain was making other backhander deals such as the Balfour Declaration and the infamous Sykes-Picot Agreement that would make visas a barrier to brotherhood.

The Saudi apologists had nothing to say to Herman’s twist that Saudi Arabia does worse than all this, because it is killing Muslims in Yemen, “already the poorest country in the Arab world, which they bomb to bits, while a political settlement could have been possible.”  Yemeni refugees are joining Syrian refugees in fleeing the terror of despotic rule, but not to Saudi Arabia of course, whose border is “very well secured.”

A question remains in talking of Arabia. Did Rainer Hermann forget to mention the noble example of Islamic brotherhood, during the time of the Prophet Muhammad ﷺ, which was shown to those earlier refugees who left behind all their possessions when they migrated from Mecca to neighboring Medina? This story would make a fitting contrast to the shameful events of the present, but it would not fit the false narrative that the West is saving humanity.

Indeed, there is a flaw in Hermann’s article. It is the claim that refugees would not want to live in “an unfree country like Saudi Arabia… because they are hungry for freedom,” when actually it was the fantasy of ‘freedom’ that led to this disaster and to all the disasters that preceded it. The “procession of Arab freedom from Mecca to Damascus” that the British army officer T.E. Lawrence described a century ago during the ‘Arab Revolt’ against the Ottoman Caliphate is still revolving, and this ‘procession of freedom’ has led to the entrenchment of despotic states and to Western military aggressions that have all brought a world of pain and harm to Muslims. European and US designs for Arab freedom, by all means fair and foul, have been meant only to maintain the status-quo and to postpone for mankind the inevitable return of Islam and the righteous Islamic Caliphate, which promises to rule with truth and justice, which for now lay sacrificed on freedom’s false altar.