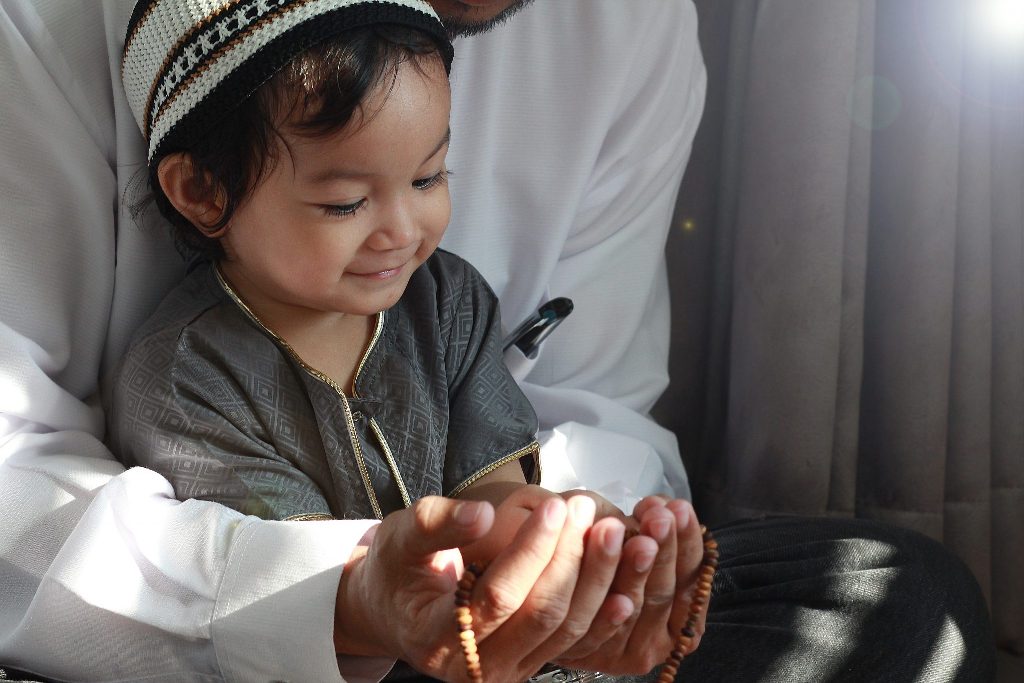 The young man raised in the worship of Allah (swt) is one of the seven blessed with the Shade of Allah (swt) on the Day or Resurrection. Narrated on the authority of Abu Hurayrah (ra) who said that I heard the Messenger of Allah ﷺ say, «سَبْعَةٌ يُظِلُّهُمُ اللَّهُ يَوْمَ الْقِيَامَةِ فِي ظِلِّهِ، يَوْمَ لاَ ظِلَّ إِلاَّ ظِلُّهُ إِمَامٌ عَادِلٌ، وَشَابٌّ نَشَأَ فِي عِبَادَةِ اللَّهِ، وَرَجُلٌ ذَكَرَ اللَّهَ فِي خَلاَءٍ فَفَاضَتْ عَيْنَاهُ، وَرَجُلٌ قَلْبُهُ مُعَلَّقٌ فِي الْمَسْجِدِ، وَرَجُلاَنِ تَحَابَّا فِي اللَّهِ، وَرَجُلٌ دَعَتْهُ امْرَأَةٌ ذَاتُ مَنْصِبٍ وَجَمَالٍ إِلَى نَفْسِهَا قَالَ إِنِّي أَخَافُ اللَّهَ‏.‏ وَرَجُلٌ تَصَدَّقَ بِصَدَقَةٍ فَأَخْفَاهَا، حَتَّى لاَ تَعْلَمَ شِمَالُهُ مَا صَنَعَتْ يَمِينُهُ»‏ “Seven (people) will be shaded by Allah by His Shade on the Day of Resurrection when there will be no shade except His Shade. (They will be), a just ruler, a young man who has been brought up in the worship of Allah, a man who remembers Allah in seclusion and his eyes are then flooded with tears, a man whose heart is attached to mosques (offers his compulsory congregational prayers in the mosque), two men who love each other for Allah’s Sake, a man who is called by a charming lady of noble birth to commit illegal sexual intercourse with her, and he says, ‘I am afraid of Allah,’ and (finally), a man who gives in charity so secretly that his left hand does not know what his right hand has given.” [Bukhari] Such is the great status of the young man (شَابٌّ sheb/Shab) who is raised in the worship of Allah (swt). In the Arabic language, the sheb is the young man, who matures from puberty and until the age of forty Hijri years.

Indeed, the young Muslim that fears Allah (swt) and hopes for His Mercy and Forgiveness is the one who truly benefits of youth. RasulAllah ﷺ entered upon a young man while he was dying. So he ﷺ said, « كَيْفَ تَجِدُكَ » “How do you feel?” He said: “By Allah! O Messenger of Allah! Indeed I hope in Allah and I fear from my sins.” So RasulAllah ﷺ said, « »لاَ يَجْتَمِعَانِ فِي قَلْبِ عَبْدٍ فِي مِثْلِ هَذَا الْمَوْطِنِ إِلاَّ أَعْطَاهُ اللَّهُ مَا يَرْجُو وَآمَنَهُ مِمَّا يَخَافُ  “These two will not be gathered in a worshipper’s heart at a time such as this, except that Allah will grant him what he hopes and make him safe from what he fears.” [Tirmidhi]. Such is the young man who immerses himself in the Deen, nurturing his mind with it and moulding his heart according to it.

The good young man is both the product of pious families and in turn builds pious households. Allah (swt) revealed, يَا أَيُّهَا الَّذِينَ آَمَنُوا قُوا أَنْفُسَكُمْ وَأَهْلِيكُمْ نَارًا وَقُودُهَا النَّاسُ وَالْحِجَارَةُ “O you who believe! Ward off from yourselves and your families a Fire (Hell) whose fuel is men and stones.” [Surah At-Tahreem 66:6] Qatadah said, “He commands obedience to Allah, to not disobey Allah, and he orders his family to obey His orders and helps them to act upon His orders. When one sees disobedience, he stops them and forbids them from doing it.” Similar was said by Ad-Dahhak and Muqatil; “It is an obligation for the Muslim to teach his near family members, and his male and female slaves what Allah has made obligatory for them and what Allah has forbidden for them.” Ahmad, Abu Dawud and At-Tirmidhi narrated that RasulAllah ﷺ said,

« مُرُوا الصَّبِيَّ بِالصَّلَاةِ إِذَا بَلَغَ سَبْعَ سِنِينَ، فَإِذَا بَلَغَ عَشْرَ سِنِينَ فَاضْرِبُوهُ عَلَيْهَا » “Order the children to pray when they reach the age of seven and when they reach the age of ten, discipline them for (not performing) it.” [Abu Dawood] Such households are truly wealthy and high in status in the Aakhira. They are the ones who put the Deen as the foremost priority above all worldly pursuits rather than blindly seeking status in the Dunya, through degrees and careers, to the point that it compromises the worship of Allah (swt), in such households, carrying the Dawah is the very center of family life.

Once RasulAllah ﷺ recited the ayah about warding the fire from ourselves and our families, before his Companions (ra) and a young man fainted. RasulAllah ﷺ put his hand over his heart and he found it still beating, so RasulAllah ﷺ said, «يا فتى قل لا إله إلا الله» “Young man, say: Laa Ilaaha ilAllah.” The boy repeated: Laa Ilaaha Ilallah, so the Prophet gave him the glad tidings of Jannah. The Companions (ra) asked: Is this for him from amongst us O Messenger of Allah? RasulAllah ﷺ said, «أوَما سمعتم قوله تعالى ذَٰلِكَ لِمَنْ خَافَ مَقَامِي وَخَافَ وَعِيدِ» “Have you not heard the saying of Allah (swt): “This is for him who fears standing before Me (on the Day of Resurrection or fears My Punishment) and also fears My Threat.” [Surah Ibraheem 14: 14]?” [Al-Haakim and Adh-Dhahabi]. Such is the young man who lives in Dunya, whilst his eyes are fixed firmly on the Aakhira.

Indeed it is the pious young men who shone the light of Islam upon the world for the first time under the leadership of RasulAllah ﷺ. Many of the Companions (ra) embraced Islam at tender ages. The fourth Khaleefah Rashid, ‘Ali ibn Abi Talib, embraced Islam at the tender age of eight. The young man who shielded RasulAllah ﷺ from flying arrows with his own body, until one of his fingers was paralyzed, Talhah ibn ‘Ubaydullah (ra), was eleven years old when he embraced the Deen. The one who opened his home for the learning of the Deen, transforming it into headquarters for RasulAllah ﷺ, Al-Arqam ibn Abi al-Arqam (ra), was fourteen upon embracing Islam. The youth who conveyed Islam to the Emperor of Abyssinia, Ja’far ibn Abi Talib (ra), embraced Islam at the age of eighteen years. The third Khaleefah Rashid, ‘Uthman ibn ‘Affan (ra) was about twenty years, when he began his great service and sacrifice for Islam. Khabbab ibn al-Arrat (ra) endured great torture after announcing his Islam at around the age of twenty. The young man at whose hands Yathrib was prepared to become Madinah, the first Islamic state, Mus’ab ibn ‘Umayr, was twenty four years old upon embracing Islam. The second Khaleefah Rashid, ‘Umar ibn al-Khattab, was twenty-six years old, upon accepting the Risaalah of Muhammad ﷺ, as an answer to the Du’a of RasulAllah ﷺ.

Throughout the Islamic era, well after the best of all generations, there were young men raised in Islam that rose to the forefront of political and military leadership. So let us consider, just three of the many, many good men, who achieved greatness in the Deen, after being raised as young men in the Deen. The three were Muhammad Al-Fatih, Aurangzeb Alamgir and Tipu Sultan, may Allah (swt) have mercy upon them all.

RasulAllah ﷺ said, «لَتُفْتَحَنَّ الْقُسْطَنْطِينِيَّةُ فَلَنِعْمَ الْأَمِيرُ أَمِيرُهَا وَلَنِعْمَ الْجَيْشُ ذَلِكَ الْجَيْشُ» “You will open Constantinople. Its Amir is the best Amir, and the best army is that army.” [Ahmed] This glad tiding was achieved at the hands of a young man, Muhammad Al-Fatih, who was not older than twenty-one, having been raised in the worship of Allah (swt). His father, Sultan Murad II, groomed him, whilst he was mentored by the finest teachers of his time, including Ahmad bin Ismail Al-Kurani, who was mentioned by Al-Suyuti as the first teacher of Al-Fatih and stated about him: “He was a juristic scholar, whose scholars of his era witnessed to him superiority and mastery. Rather, they called him: the Abu Hanifa of his time.” Sheikh Akshamsaddin Sungkar was the first to cultivate in his mind the hadith of RasulAllah ﷺ about the conquest of Constantinople, since his childhood, so the young man grew up aiming to achieve that conquest. Sheikh Akshamsaddin taught Muhammad al-Fatih the basic sciences of the Qur’an and the Sunnah, jurisprudence, Arabic, Persian and Turkish, mathematics, astronomy and history. This is in addition to his valor in equestrian and martial arts.

Also amongst the young men who were brought up in Islam, in the Islamic era, is the Mughal Sultan Aurangazeb. Indeed, great Muslim leaders are brought up with the distinct traits that appear at a young age. Aurangazeb showed the signs of diligence, acceptance of the Deen and restraint from frivolity in childhood. He was raised up in a pure Islamic environment, without contamination of kufr and sin. He was groomed by Imam Muhammed Ma’soom Sirhindi, the son of Sheikh Ahmed Sirhindi. Aurangazeb learned Quran and its goodness. He learned Hanafi jurisprudence and excelled at it. He was masterful in writing, a skilled poet with a love for poetry, and skilled in horse riding and military affairs. He learned Arabic, Persian and Turkish languages. At the age of forty, he became Sultan, whereupon he remained in the state of jihad for fifty-two years, until the Indian Subcontinent was dominated by Islam, right from the Himalayan ranges to the Indian Ocean, from today’s Bangladesh to the borders of modern day Iran. Under his Islamic rule, Muslims fought more than thirty major battles, out of which eleven were led by Aurengzeb himself.

As for Tipu Sultan, he was born in November 1750 and achieved martyrdom on 4 May 1799. Tipu was the ruler of Mysore and is famously known as ‘The Tiger of Mysore,’ employing the use of rockets in warfare. At age 15, he accompanied his father against the British in the First Mysoregh War in 1766. He commanded a corps of cavalry in the expansion at age 16. From the age of 17, Tipu was given independent charge of important diplomatic and military missions. He was martyred on the battlefield, whilst defending the Muslim Lands from the invasion of the hateful British kuffar, having struck fear deep into their arrogant hearts, through his cunning, bravery, creativity and ingenuity.

Such are the young men that are raised in Islam! Such are the young men that are needed today, at a time when the Ummah is ravaged and impoverished by the enemies of Islam, from the East and the West! InshaaAllah the glad tidings of RasulAllah ﷺ about the return of the Khilafah (Caliphate) upon the Method of the Prophethood will come to be and it is expected that it will be achieved upon the shoulders of the good young men of the current generation. RasulAllah ﷺ, «مَثَلُ أُمَّتِي مَثَلُ الْمَطَرِ لَا يُدْرَى أَوَّلُهُ خَيْرٌ أَوْ آخِرُهُ» “My Ummah is like a rain, it is not known if the first of it is good or last of it” (Tirmithi).