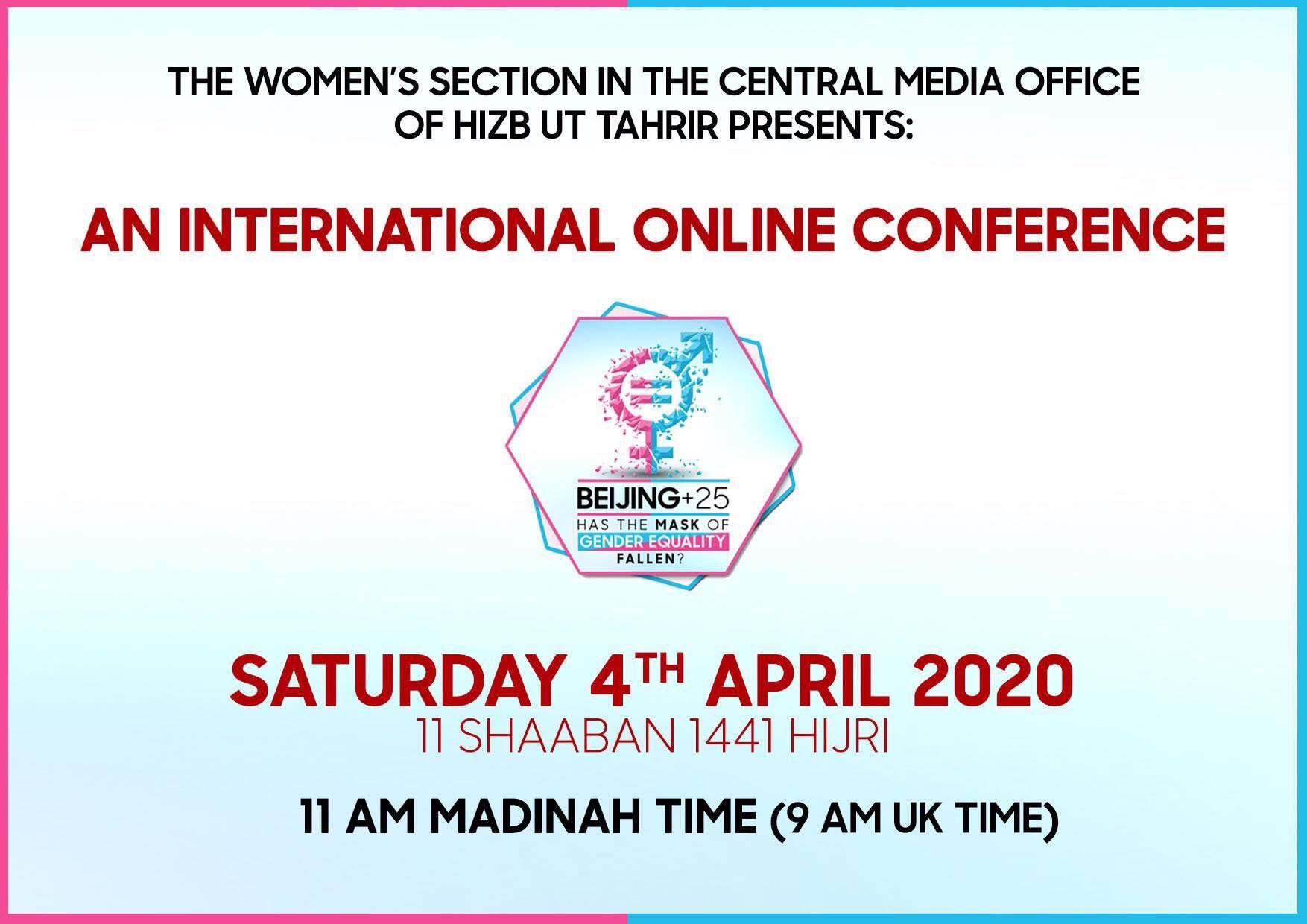 On Saturday 4th of April, the Women’s Section in the Central Media Office of Hizb ut Tahrir successfully held an important International Online Conference entitled, “Beijing+25: Has the Mask of Gender Equality Fallen?”. It was the culmination of a three-week global campaign on the subject. The event included speeches from the female members of Hizb ut Tahrir from Palestine, Turkey, Indonesia, Tunisia, Australia, Lebanon and Britain. It was streamed to an international audience in English, Arabic, Turkish and Indonesian and was watched by tens of thousands of viewers. The conference aimed to (examine whether the claims promoted by the UN’s 1995 Beijing Declaration and Platform for Action (BPfA), that the Western concept of ‘Gender Equality’ is the means to raise the status, advance the rights, and improve the quality of life of women internationally has been achieved in reality or not.) The declaration enjoys its 25th anniversary this year.

This important conference started with a talk which addressed the ideological aims of the historical and current global propagation of feminism and gender equality. It explained that it was simply another means employed by colonial capitalist states to impose their secular, liberal, and other beliefs and systems in the Muslim lands and upon Muslim communities worldwide in order to preserve their global hegemony and interests and prevent the rise of Islam. It also discussed how international and national debates on women’s issues have become politicized and monopolized by western secular agendas and thoughts, rather than objectively studying the true causes and sound solutions to the plethora of problems women face, and the true impact that different value systems, including Islam, have upon the lives of women, family life and society.

The second talk was entitled, “Dismantling the Gender Equality Illusions” and highlighted the failure of gender equality policies and laws to protect and empower women and improve their lives, for the root cause of the multitude of problems that women face today is not based in gender inequalities but rather the capitalist, socialist and other man-made beliefs, values and systems implemented in states across the world.

The third talk exposed the insidious agenda of the BPfA to abolish the Islamic social and family laws within states and the mechanisms and institutions used by Muslim governments and international bodies to achieve this aim, and the detrimental impact it has had on women, the family unit and society.

The fourth, fifth and sixth talks highlighted the flaws and failures of the strategic objectives of the declaration in the fields of education provision for girls and women, guaranteeing the economic rights of women, and the protection of women in armed conflict, alongside presenting the sound Islamic approach to securing these rights for women. They also dismantled the gender narrative of ‘women’s empowerment through employment’ and explained how this is a tool used by capitalist states to exploit women as engine drivers of their economy rather than genuinely improving their standard of living.

And the final talk, entitled, “Islam: The Path to the True Empowerment of Women”, discussed how Islam and its political system, the Khilafah (Caliphate) based upon the method of the Prophethood, embody sound principles, laws and systems which offer a detailed and correct vision for how to: raise the status of women within society, including empowering and supporting the role of motherhood; prevent and solve the multitude of political, economic and social problems they face, including eradicating poverty and creating prosperity; protect women from violence, exploitation and injustices; provide them access to high-quality education and healthcare; enable them to have an active and productive public role within a safe environment; and achieve true progress and development within the state. The talk ended by raising a call to Muslim women across the world to join the work to establish the righteous Khilafah state which will herald a new dawn for women in the Muslim lands and stand as a model globally once again for the rights and good treatment that all women deserve.

In the coming weeks, a booklet, containing a compilation of articles, which expand further on the issues addressed in the conference and campaign will be published in various languages Insha Allah.

Conference speeches, campaign material and the booklet can be accessed at: