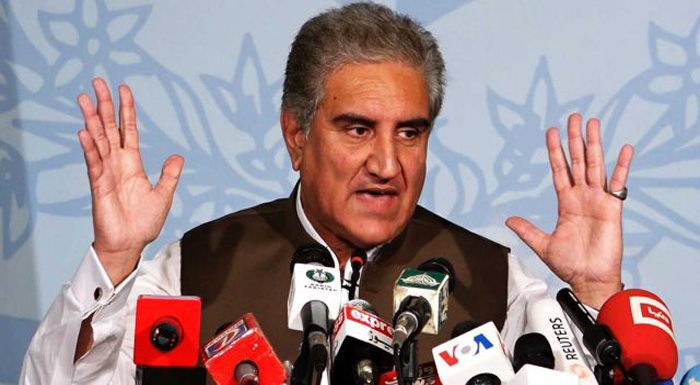 Foreign Minister of Pakistan Shah Mehmood Qureshi on 17th August 2019, termed Indian Defence Minister, Rajnath Singh’s, statement over a possible change in its “no first use” nuclear policy as a “damning reminder of India’s unbridled thirst for violence.” Rajnath Singh suggested on 16th August 2019 that the country’s longstanding pledge not to use nuclear weapons pre-emptively may come under review should “circumstances” in the future demand so.

Comment:
The statement of Indian Defence Minister Rajnath Singh comes at a time when Occupied Kashmir is under complete lockdown by Indian forces after Narendra Modi’s government stripped Occupied Kashmir of its autonomy. This statement is in fact a veiled threat to Pakistan. India was encouraged to give such a threatening statement to Pakistan because of the weak stance of its political and military leadership. Although the military leadership has been claiming that they will go to any extent, the political leadership, which is on the same page as the military leadership, has been continuously claiming that war is not an option. The weak stance increased India in its belligerence and not it states that if any action is made to help the Muslims of Occupied Kashmir, then India will use nuclear arms. Significantly, the Bajwa-Imran regime is presenting the same threat in different words. Its inaction action over Indian aggression in Occupied Kashmir and across the Line of Control is being justified on the claim that if they initiate a war with India it could lead to a nuclear war.

Nuclear arsenal has only ever been used once in war, by the United States against Japan. That one incident happened because only one of the warring states had nuclear capability. No military conflict, either direct or indirect, between two nuclear states has ever led to nuclear war because of the possibility of mutual assured destruction. If Pakistan armed forces are moved to liberate occupied Kashmir, India will be deterred from a position to launch its nuclear arsenal, as it knows that Pakistan is also a nuclear state with a far superior missile delivery system than India. The issue of Kashmir can be resolved by Jihad as this is the only option. Seventy years of the conflict has proved that the Muslims of Kashmir will never be liberated through United Nations resolutions or the pressure of international community. Azad (Liberated) Kashmir was liberated from the Indian occupation by performing Jihad and the moment United Nations intervened the complete liberation of Kashmir became a distant dream.

The current political and military leadership of Pakistan is a slave to its American masters. They go to war when America ask them to even if it was against their own brothers in the tribal regions of Pakistan, without any hesitation. However, when they are asked to liberate the oppressed Muslims of Occupied Kashmir, they invent thousands of excuses. Instead of rousing the believers to fight, they spread fear and doubt within them. Only the Khilafah (Caliphate) on the Method of the Prophethood will take such a bold step in order to comply with the command of Allah (swt) as He (swt) said,

“And kill them wherever you overtake them and expel them from wherever they have expelled you, and fitnah is worse than killing”
[Al-Baqarah 2:191]