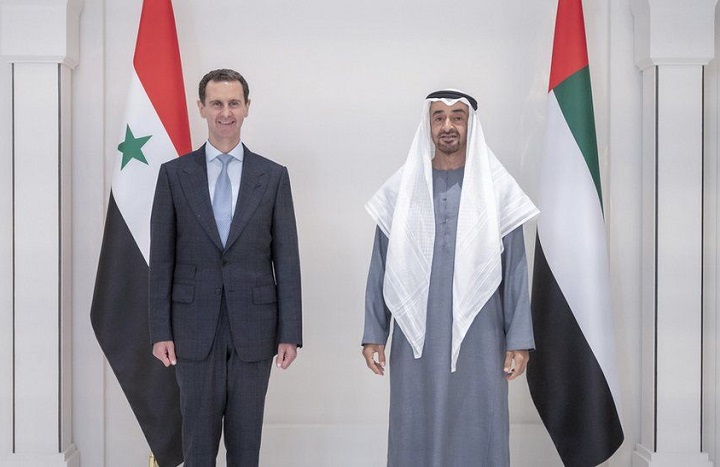 This visit proves once again that the Ruwaybidhat (ignorant) rulers in our lands stand together against the Ummah, even if their skins and masks differed. They are in the service of their masters in the kufr state, they are at war against their Ummah, Deen and the sincere of its sons.

‏All the killings and crimes committed by Bashar, the tyrant of Ash-Sham, against the people of Ash-Sham, did not prevent the rulers of the Emirates from continuing their relations with him and receiving him in their country in implementation of the plans and orders of their English and American masters against the revolution of Ash-Sham in particular and the sons of the Ummah in general.

And we all know that all the criminals and conspirators against Ash-Sham’s revolution did so with a green light from the master of crimes, America, which was and still supports its agent, Bashar, and prevents his fall.

It is the one that allowed the Iranian militias, Iran’s party in Lebanon, and others to enter to fill the vacuum created by the defection of officers and elements from the army of the tyrant of Ash-Sham, and it is the one that allowed the entry of Russian forces to support him from the air and to commit heinous massacres against the people of Ash-Sham. It is the one that distributed roles to the so-called supporting countries to contain the leaders of the factional system; to confiscate its decision, rob its will and paralyze its movement, and it is still striving to sow despair in the hearts of the people of Ash-Shams’ revolution, and to preserve the regime of its agent, the tyrant of Ash-Sham, by imposing its malicious political solutions in Geneva, foremost of which is Security Council Resolution 2254.

This visit comes as a step in the way to reproduce the criminal regime and break its isolation. The UAE was not alone in playing roles in the play of breaking the isolation and normalization with the tyrant of Ash-Sham. Rather, a group of countries followed this path, including Tunisia, Oman, Egypt, Iraq, the Al Saud regime, and others. Despite initially claiming support for Ash-Sham’s revolution, Abu Dhabi reopened its embassy in Damascus in December 2018, and has since called for Syria’s reinstatement in the Arab League.

‏O Muslims in Ash-Sham, the Abode of Islam:

You can see with your own eyes the conspiracy of countries against your revolution, their relentless efforts to abort it and waste its sacrifices. Its high time to end the manipulation of these countries and their participation in spilling our blood and increasing our hardship. Let us hold on to the strong rope of Allah Alone and trust in Him, we have no one but Allah. Our duty has become to move quickly to save the revolution from collapsing, and work hard and sincerely with the sincere workers to overthrow this criminal regime and establish the rule of Islam in its place. And if we do not hurry to do that, we will be among those who surrender their fate to their enemies and giving them the benefit of doubt, and we will be, after we have made the greatest sacrifices in the greatest revolution, like the one who untwisted her spun thread after it was strong. Allah (swt) says: