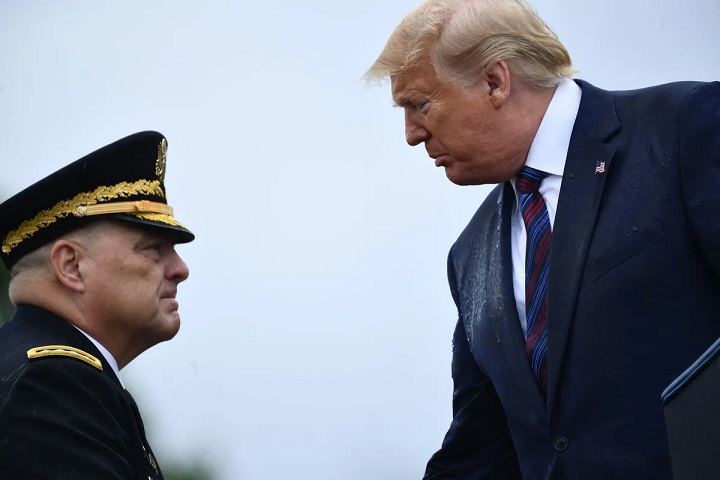 Today, a CNN headline read: “’They’re not going to f*****g succeed’: Top generals feared Trump would attempt a coup after election,” which is a stunning quote from a new book about former president Trump that is due to be released next week. The Chairman of the Joint Chiefs, General Mark Milley, was so fearful of a Trump inspired coup to remain in office beyond his election term that he gathered Chiefs of Staff from throughout the military branches to prevent Trump from succeeding: “You can’t do this without the military. You can’t do this without the CIA and the FBI. We’re the guys with the guns,” he said.

Comment:
This revelation about the politicization of the US military and its preparedness to in effect stage a counter-coup if Trump failed to accept defeat in the 2020 election shows that it is the military that has the last word: they are “the guys with the guns,” as the general said! The book, titled, “I Alone Can Fix It,” also includes conversations between General Milley and Nancy Pelosi, one of Trump’s major adversaries in Congress, about Pelosi’s fears that Trump may use nuclear weapons in the final days of his presidency. Pelosi considered Trump such a danger that she pushed him through two impeachments in Congress, although she failed to get him convicted in the Senate, which was dominated by Republicans. For all her fears of Trump, she feared that a future US president might pose an even greater danger to democracy: “We might get somebody of his ilk who’s sane, and that would really be dangerous, because it could be somebody who’s smart, who’s strategic, and the rest.”

The fact that the military holds the power has been hidden largely from Western consciousness, as the military have rarely been out of step with the political leadership where belief in the constitution, the rule of law and the political process have been stable. Trump’s presidency has shaken that belief and exposed deep divisions, and although Trump lost the election and suffered many humiliations, he in fact secured one of the highest number of votes that any candidate ever achieved in US history. Furthermore, Trump is successfully consolidating his position among traditional Republicans, the conservative media who abandoned him briefly during the transition, and also his far right supporters who sacrificed themselves for him when they invaded Congress where the election results that Trump still disputes hotly were being ratified. The crowd rampaged through Congress in search of Congressmen and the vice president who they had threatened to hang for treason.

The US has often supported the military of other countries to overthrow elected governments when it suited US interests. In 2013, Egypt’s defense minister overthrew the government of Mohamed Morsi, threw him in jail where he eventually died through mistreatment, and massacred hundreds of demonstrators in a single day. Sissi is considered a key ally of the US and Trump’s “favorite dictator,” and Egypt is one of many countries where the US has used a military coup to overthrow a democratically elected government that cannot or does not serve US interests. The US military knows better than anyone the importance of the gun at home and abroad. The US also has a long history of instigating cultural and economic struggle to subvert governments abroad, and so it is ironic that in 2016, with the election of Trump, that the Democrat Party should complain loudly of Russian interference in the election and claim that Putin himself ordered a massive cyber campaign to influence the election in favor of Trump, which is exactly what Trump’s favorite dictator did with America’s blessing and support in Egypt during the previous Democrat administration of Barack Obama.

Today, the Guardian Newspaper claimed that, “Vladimir Putin personally authorised a secret spy agency operation to support a “mentally unstable” Donald Trump in the 2016 US presidential election during a closed session of Russia’s national security council, according to what are assessed to be leaked Kremlin documents.” These startling new documents support allegations made previously that the Russians had compromising information on Trump and that they were manipulating his mental status and divisions within US society for Russia’s benefit. For sure there will be debate about the authenticity of these new documents, but regardless of that, it is equally sure that divisions will deepen within US society and if foreign governments should give a helping hand it would only be ‘the chickens coming home to roost.’