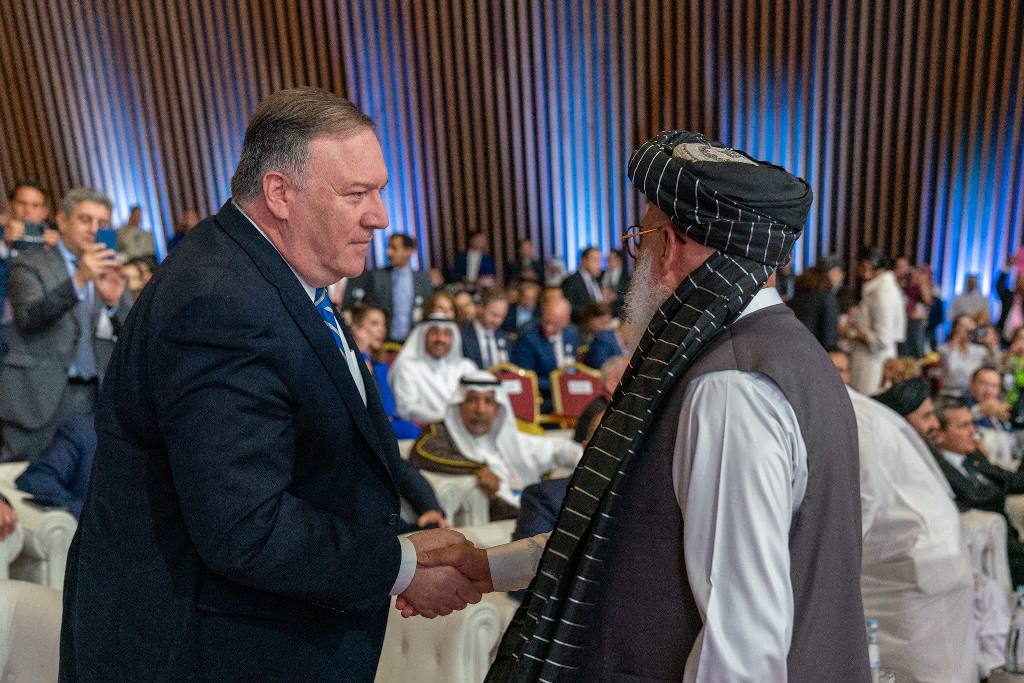 On September 3, both the Afghan government and the Taliban announced the completion of prisoner exchange process. Only seven Taliban prisoners accused of killing Australian and French nationals would be kept with the government and are set to remain under surveillance in Qatar. According to some members of the Afghan delegation, their itinerary for the start of inter-Afghan talks in Qatar has been coordinated on Saturday, September 5. (Afghan Media outlets)

Unfortunately, the scenario of war and peace in Afghanistan has been strongly tied to the upcoming US elections both due to the lack of the Khilafah (Caliphate) and sincere Muslim rulers among the Ummah. Since the beginning of the process, the Trump administration has employed the talks with the Taliban as a tool against its political opponents both in the US and around the world.

By concluding a peace agreement with the Taliban, the US was able to protect its entire occupation forces from the assaults of the Afghan Mujahideen throughout Afghanistan. Nonetheless, the war between the government and the Taliban has kept continuing with unprecedented intensity and terror – whose primary victims are the Afghans who are suffering the most from this turbulence. This situation, in turn, will unsurprisingly and gradually decline the Taliban’s popularity among the people.

As a result of the peace agreement with the Taliban, the US has reduced the number of its troops in Afghanistan – from 13,800 to 8,400 and is also expected to decrease it to 4,000 before the elections. The troops’ reduction, indeed, has been translated as a great success by the Trump administration during the election campaigns and other events in order to attract the American public opinions.

The US government, an enemy who had waged a fierce war against the Taliban for nearly twenty years – which basically had stretched the US’s patience – has now turned them into an ally to the US, even they have pledged not to allow anyone to use the Afghan soil as a threat against the US and its allies. This, indeed, is a big achievement for the US as it has not been able to attain almost in the course of twenty years of war, but the Trump administration could easily achieve it through 18 months of political dialogue.

Therefore, the US has secured all of its political goals it ever wanted to use to attract the American and international public opinions, while other goals it aims to pursue inside Afghanistan and the region will be achieved during the inter-Afghan negotiations through various puppet factions. It also has plotted to put the burden of unfortunate consequences of the current and the upcoming civil war on the shoulders of Afghans after signing the peace agreement with the Taliban.

But it is not clear at all when and how the Afghan talks would come to settle. In fact, peace in Afghanistan depends on the US strategy in the region rather than the outcomes of the inter-Afghan talks. As the US tries to slam China and Russia in Central Asia, Pakistan and even in East Turkistan by convincing the rulers of Central Asia and Pakistan to exert the deal of exporting energy to India through Afghanistan and Pakistan; therefore, as for now, dozens of giant American companies are currently in the verge of moving from China to India. But the stances of China, Russia, Central Asia and Pakistan against the US regional strategy would determine the prospects of war and peace in Afghanistan.

On the other hand, the Mujahideen, imprisoned for the murder of Australian and French occupation soldiers, are still being held in custody under severe surveillance which shows the grave humiliation of the puppet rulers and other factions. Because these are the folks who should have been released through an exclusive ceremony and warmly received by the people as heroes (Ghazis) and real champions of Afghan Jihad. While they are being watched in a third place (Qatar) by the instruction of their Australian and French masters.

Therefore, if we go through the US history, we will figure out that it has breached almost all of the agreements with other nations of the world as it has exploited the agreement with the Taliban and will continue to do so in pursuit of its interests in the future, too.

Indeed, most Afghan factions have experienced the taste of making friendship with the US and its allies, the implementation of the infidel system of Democracy over the past 19 years; therefore, they should learn from their past mistakes and not repeat them again because the US has never ever been loyal to any Afghan faction – be it the Islamist, modernist or secular. As it has not only used them, in turn, for particular scenarios at a proper time, but has also humiliated them after their mission is over. The factions that are keen to experience the American friendship will also bear the same destiny in the near future.

Consequently, the firmest source through which the Afghans could determine their destiny is the instruction of Islam; as they are obliged to grab its rope to eliminate the occupation and colonization of any kind: intellectual, intelligence, political, economic, cultural, and military. They should unanimously reject all infidel Western values ​​that have been promoted in Afghanistan over the past 19 years by the US, its allies and puppet rulers. As well as by returning to Almighty Allah, upon the belief of Islam, they should get united to establish a pure Islamic system.

They should persistently avoid to accept the formation of a new system after the marriage of Emirate with the Republic, composed of skin of Islam and the flesh of Republic in the aftermath of inter-Afghan negotiations – accepting the matters through insinuations of the US and its regional puppet rulers, which would eventually cause the torment of Almighty Allah intensify over themselves and their people. As a result, neither will we have the people standing on our side in this world nor will we have any further excuses before Almighty Allah in the Hereafter, and we would face severe humiliation from generation to generation like the Muslims of other Islamic lands. Because Almighty Allah says in Surah Taha: وَمَنْ أَعْرَضَ عَن ذِكْرِي فَإِنَّ لَهُ مَعِيشَةً ضَنكًا وَنَحْشُرُهُ يَوْمَ الْقِيَامَةِ أَعْمَى * قَالَ رَبِّ لِمَ حَشَرْتَنِي أَعْمَى وَقَدْ كُنتُ بَصِيرًا * قَالَ كَذَلِكَ أَتَتْكَ آيَاتُنَا فَنَسِيتَهَا وَكَذَلِكَ الْيَوْمَ تُنسَى * وَكَذَلِكَ نَجْزِي مَنْ أَسْرَفَ وَلَمْ يُؤْمِن بِآيَاتِ رَبِّهِ وَلَعَذَابُ الْآخِرَةِ أَشَدُّ وَأَبْقَى “And whoever turns away from My remembrance – indeed, he will have a depressed [i.e., difficult] life, and We will gather [i.e., raise] him on the Day of Resurrection blind. He will say, “My Lord, why have you raised me blind while I was [once] seeing? [Allah] will say, “Thus did Our signs come to you, and you forgot [i.e., disregarded] them; and thus will you this Day be forgotten. And thus do We recompense he who transgressed and did not believe in the signs of his Lord. And the punishment of the Hereafter is more severe and more enduring.”