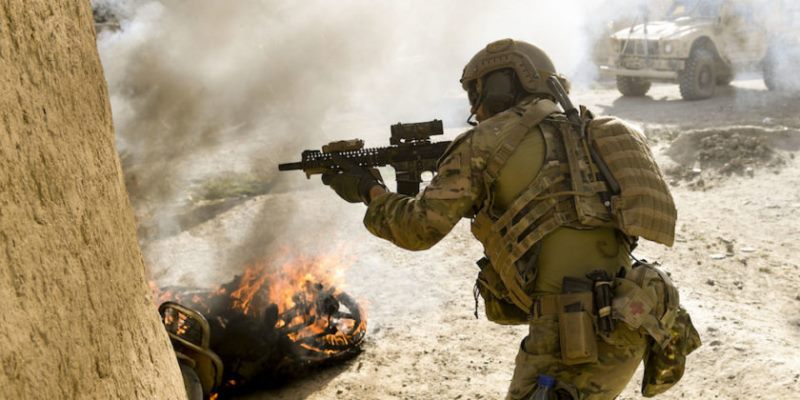 The US has offered $1 million reward for information on whereabouts of Hamza son of Osama bin Laden, the former leader of al-Qaeda while continuing the fifth round of talks with the Taliban in Qatar, the ex-host of al-Qaeda. The US officials have claimed that Hamza bin Laden has been emerging as one of the main leaders of ‘terrorist’ and ‘Islamist’ groups residing in an area between ​​Afghanistan and Pakistan border. The US officials have asserted that Hamza, via audio and video pronouncements, has urged attacks on US and its western allies as retaliation for his father’s death.

Hostility-provoking policy has been one of the most important subject-matters of the US foreign policy which is aimed at distorting public thoughts and avoiding breach of internal dissection by entertaining the public opinions about the emergence of a foreigner enemy. The US government has always introduced new enemy to US citizens at different times and in line with its foreign policy. It frequently launches campaigns and disseminates propaganda regarding its self-provoked enemy so that the US citizens, particularly the taxpayers, would tremble with fears and be ultimately intrigued to fund the war.

In light of this, the US launched the ‘war on terror’ agenda in 2001, a decade after the collapse of the Socialism, which in turn happened to lose its global legitimacy after 18 years when it was revealed that the US’s longest-ever war, in fact, was based on a hypothetical threat and fictional allegations. Conversely, the main aim of the US is to carry out fight against Muslims throughout the world. In fact, the slogan of ‘war on terror’ bears insignificant stance in the US foreign policy; for this reason, the US government has been repeatedly defining the economic power of China and the political capability of Russia as main threats to the US global hegemony. Although the US is still self-fabricating enemies for itself in the Islamic territories – the propaganda and magnification about Hamza bin Laden is one of those plots whilst they have no real evidence to prove the allegation. Although, struggles to defeating the US is the primary goal of any Muslim struggler.

According to Michael Evanoff, Assistant Secretary of State for Diplomatic Security, “Hamza bin Laden has crossed Iran and stays somewhere on the border between Afghanistan and Pakistan.” Such a declaration, once again reveals the heinous aim of the US which, after the failure of ISIL agenda in Afghanistan, justifies its military presence in Afghanistan by showcasing al-Qaeda’s return to the region.

On the other hand, the US is engaged in its fifth round of talks with the Taliban. Though the Taliban used to be defined as ‘terrorist’ and ‘enemy’ in line with the US foreign policy, which, following the alteration of US policy (from-war-to-peace), happened to be considered as opponents for the Afghan government. As for now, the US is proceeding talks with this group.

The core issues in the fifth round of talks comprise ‘withdrawal of the US troops’ and that ‘the soil of Afghanistan should not be used against the Americans and against its allies’. With this in mind, the propaganda about al Qaeda’s rise, in the midst of peace talks, buttress the Americans to utilize this as an option of pressure over the Taliban during the negotiations so that Taliban would agree with the deployment of a standby US military unit in Afghanistan to fighting against the international ‘terrorists’, such as al-Qaeda and ISIS-K.

The Taliban seems very optimistic about the withdrawal of the US troops. As Suhail Shaheen, spokesman for the Taliban political office in Qatar, said, “If the Taliban was not hopeful for the outcomes of the talks, it would not move to the next round of talks.” Therefore, the issue of the US troop’s withdrawal from Afghanistan is one of the deceptive measures by means of which the US wants to integrate the Taliban into an American political system. As the talks are ongoing, the two sides talk about significant progress. The Taliban deliberates that US will pullout Afghanistan, while the agenda of US troop’s withdrawal looks more like an appetizer in order to persuade the Taliban to sit on the negotiating table, but the US with such a ‘promise’, which is solely a mirage, will likely deceive the Taliban. On the other hand, the US is trying to showcase the prospective threats by another group to secure its presence in Afghanistan.

Therefore, we (Muslims) must profoundly realize the hostility-provoking policy of the US, which in terms of its foreign policy defines one of the groups among Muslims as an enemy and then pursues its regional and strategic goals by occupying the Islamic territories under the guise of ‘war on terror’. They also showcase their enemy as the Muslims’ enemy, while in reality, the US itself is the sworn enemy of Muslims, and we should not be deceived by the hostility-provoking policy of the US being employed in the Islamic territories. Consequently, it is necessarily crucial for the Taliban to realize the ongoing deceptive policy and shortly withdraw from the negotiation process in order to let the US swamp in the quagmire of Afghanistan and withdraw Afghanistan by suffering an extreme scale of humiliation and defeat.