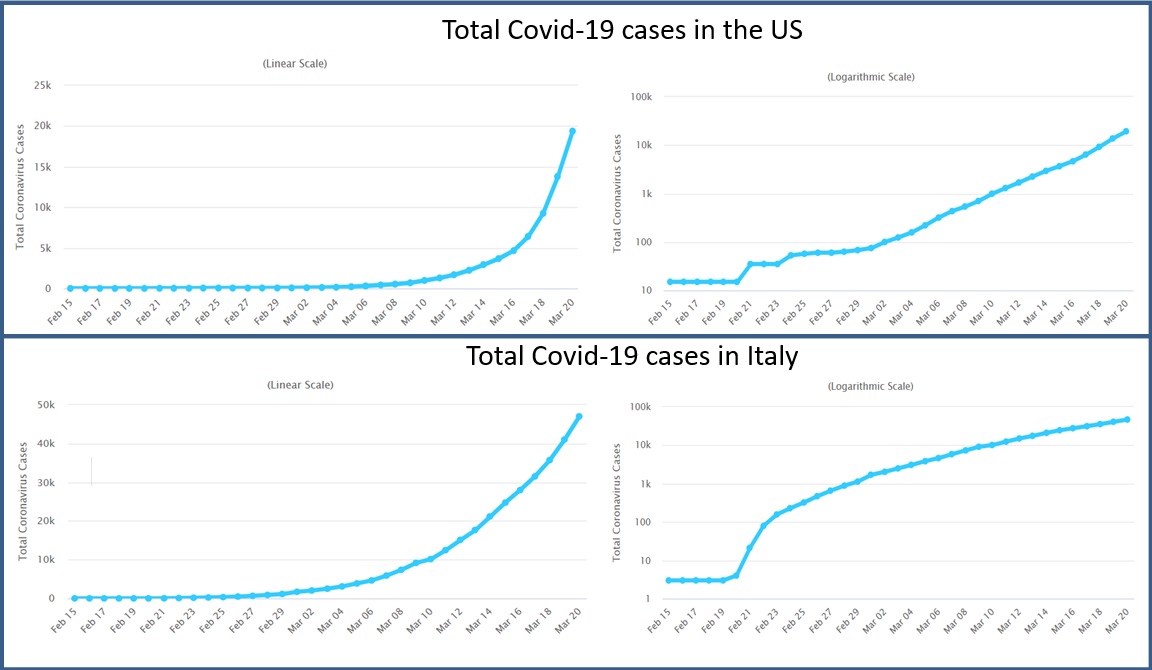 The US is facing catastrophe and has overtaken Germany and France in the last two days for Covid-19 cases, and although Italy now has twice as many cases as the US, the cumulative total number of cases is doubling every 4 days in Italy, while it is doubling every 2 days in the US. Trump promised that he would make America great again, but within days America will be great by virtue of having more reported Covid-19 cases than any other country in the world, and in two weeks, there is likely to be 1 million cases in the US.

The world may soon call it the US virus, but Trump called it the “Chinese virus” because “it came from China,” and he prevented air travel from China and told his people they were now safe. Then it began to spread further and cause alarm in Iran, and in Italy and other European countries, and Trump called it the “foreign virus” and he told his people to thank him for having closed the country to China. Then he had to close the US borders to Europe and he called it the “European virus.” He gave press conferences praising his own intelligence and his quick response, but the virus was already circulating in the US. There were 62 cases on the 1st of March, and then hundreds and then thousands. Trump has enchanted and amazed the media by his arrogance and ignorance to such an extent that they have not fully realized how big the crisis is becoming and how soon it will hit them. Trump promised his people medicines on Thursday and Friday, while his own medical experts said that these drugs are still not proven to work, and months of testing are required. Doctors are complaining that they don’t have gloves and masks in the richest country in the world despite the daily warnings from the US intelligence agencies since January.

Italy, currently in second place after China, placed its country under strict control measures too late, but the US has been even slower. In the UK, Prime Minister Boris Johnson spoke coldly of herd immunity and preparing the nation for the death of many “loved-ones” while bringing in control measures slowly in small stages so as not to annoy the people and the UK will also pay a heavy price. While China controlled the virus with oppressive state control, South Korea acted faster and also brought the crisis under control, but close proximity and cultural affiliation with China may have made it easier for Korea to gain the support of its people for massive expenditure and invasion of privacy to fight the virus. As for the leader of the democratic nations, it has failed. Self-centered and mean, US Capitalism closed its doors to the world and turned its back on the needy, and it did not dare to risk the anger of its people by restricting their freedoms to fight the virus, and now it has lost.

US congressional representatives knew the danger was coming but sold millions of dollars of their personal stocks and shares before the US stock market started plunging to historic lows. They received Senate Committee briefings on the danger of Covid-19 but told the country that everything was under control when it was not. The New York Times said about the cowardly congressional representative yesterday, “They could have made a difference, but they made a profit!” Capitalism and democracy are failing the American people who are haunted by the constant threat of poverty and homelessness and teased by the promise of wealth that only a few can obtain. Capitalism exploits them and democracy panders to their whims regardless of the cost, and very little has been prepared in advance to protect them from the so-called Chinese virus.