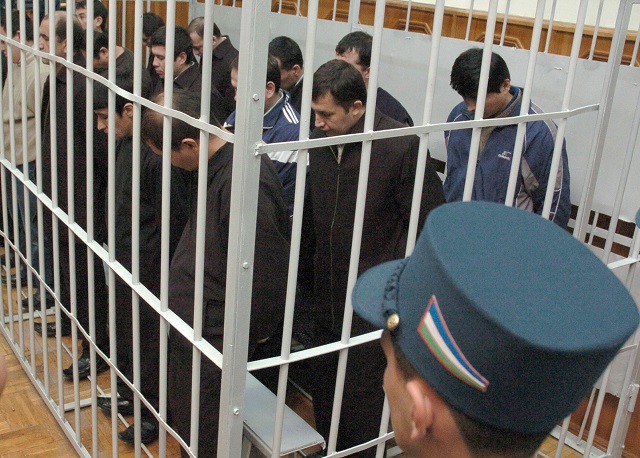 On 13/10/2021, RFE/RL published the following: “On October 13th, The United States Commission on International Religious Freedom (USCIRF) published its periodic report on Uzbekistan. The report states that there are more than 2,000 religious prisoners held in Uzbek prisons, 81 of whom have been identified.”

The report’s author, Steve Swerdlow, rapporteur for the Congress for Human Rights in Central Asia, said that of the 81 believers, most were subjected to torture or other types of humiliation.

The current report of the United States Commission on International Religious Freedom was entitled: “Uzbekistan’s Religious and Political Prisoners: Addressing a Legacy of Repression.”

Comment:
It is as if the American committee discovered only now that there are more than 2,000 religious prisoners in Uzbek prisons!! America’s 20 years of bloodshed and thirst for blood in Afghanistan – although it fought with the most powerful military hardware in the world – did not achieve victory; instead America was expelled from this country as the Soviet Union was expelled, but with an even more painful stigma. And all attempts to hide its shame did not restore its past reputation. It felt the enthusiasm of the Ummah’s Mujahideen in the Taliban’s strikes. They have clearly seen the strength of this Ummah which will emerge if the false borders that the kuffar have set between Afghanistan, Pakistan, Central Asia and other countries are removed. So, they take every malicious step to prevent this Ummah from gaining its former indomitable strength. The proof of such shameful American steps is that they make a fuss about prisoners in Uzbek prisons who were tortured, executed and sentenced to prison 20 years ago, as if they knew this only today! Human Rights in Uzbekistan have been violated for a long time, and not only today. As is the case in all Islamic countries where it is violated for many years. How strange!!!

Why do cowboys who talk about ‘conditions on Mars’ suddenly need to remember members of Hizb ut Tahrir and our other brothers who suffered and are still suffering in an ocean of terrible hardship for a quarter of a century ago?! Doesn’t this shameful state, which is used to shouting and promoting nonsense about human rights, see the very harsh and inhuman living conditions of the Uyghur Muslims in East Turkestan?! Does it not hear the cries of the suffering of Muslims in countries such as Syria, Yemen and Palestine?! And the whole world is sounding the alarm about this! Isn’t that so?! It is clear that America, Russia, China and other kaffir colonial powers are eying Central Asia including Uzbekistan because of its mouth-watering resources. The United States is not worried about the fact that Muslims are still in detention in Uzbekistan and that the current president continues his predecessor’s thirst for blood too. Rather, it fears the reunification of the entire Ummah and its return to its former strength for thirteen centuries. So ‘Human Rights’ are just a pretext!!

O Muslims in Uzbekistan: Do not be deceived by the colonial kuffar who cry out about violations of Human Rights to bridle the puppet rulers on your pure land and about the threat of attack from your brothers in the neighboring country! You are an inseparable part of the noble Ummah and the indomitable body of Islam. Your resolve is from Islam and by belief! The only reason for the greedy mean West to surround you is its fear of the Islamic Khilafah (Caliphate) that is showing signs of its return on the international stage. No matter how hard they try to obstruct the way to the return of the Khilafah, the Khilafah Rashidah (rightly-guided Caliphate) will surely return to the world again, Allah willing.