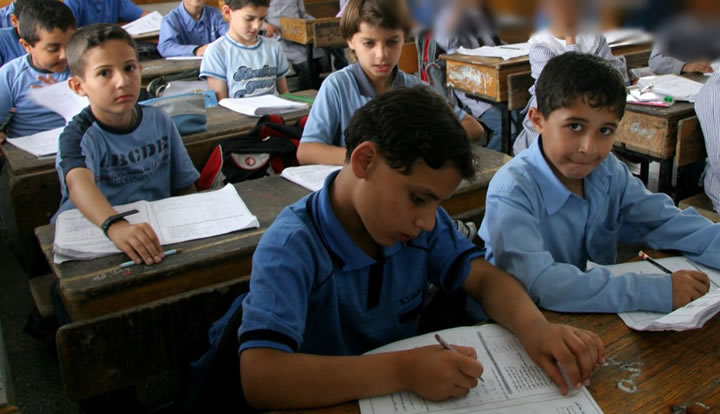 A trend that is currently gaining traction in Palestine with ferocity not limited to the following Palestinian Ministry of Education extracurricular activities with the youth:

The US and various European countries pump millions of dollars into the educational curricula in Palestine and other Muslim countries.

At the end of this article is a short list of links regarding various events held throughout Palestine.

Little girls dressed in a thob (traditional Palestinian dress) doing dabka – trained and encouraged to perform dabka dances before men in public events be they in competitions or assemblies – but some argue that the girls are young so it not an issue for them to sing or dance with little boys.

The girls and boys are not trained to only do the dabka in traditional separated enclosed areas or in special occasions but no – they are trained and pushed to do this before crowds which then translated into teenage girls and boys doing mixed dances under the theme of Palestinian heritage as if Palestinian heritage is void of Islamic identity?! Dancing, singing, and dabka displays, opening entertainment for businesses and conventions like in Ramallah, Hebron, Nablus and throughout the towns of Palestine with photo shoots with male government officials (which have become a common sight on various Palestinian news networks) are all in the name of extracurricular school activities to allow for so-called self-expression for students.

Normalizing mixing of genders – various extracurricular activities like drama or band where it pressures both genders to interact and mingle with one another making this a ‘normal occurrence’ OR where girls and boys hold dabka dances together in front of gawking audiences watching their honor prance on stage under the limelight for all the world to witness while the organizers – the Palestinian Ministry of Education boasts of advancement or so it thinks …to whose standards? Certainly not that of Islamic values of modesty, protectiveness and its Ahkaam! Rather to the standards of western norms following their dictates precisely to achieve the underlying aim of the Palestinian curriculum to stamp out Islam from the lives of Muslim children.

Another facet of extracurricular activities is the persuasion of girls into competitive sports such as football with the claims that girls have a right to play competitive sports and participate in recreational activities. The question is why not afford them those activities within the guidelines of the Ahkaam of Islam? Why are our Muslim daughters being pushed on to open public fields in shorts and t-shirts, and taken to travel competitions without proper supervision to play before mixed audiences or running side by side in improper attire alongside males in marathons? Jibril Rajoub – former head of the Preventive Security Force – in an “Israeli” TV interview expressed “which is better for them to see… our girls in shorts or them “wrapped up” … or our girls in hijab or wearing shorts playing football?” The bluntness in his statement should send waves of outrage in our Ummah.

“O you who have believed, protect yourselves and your families from a Fire whose fuel is people and stones, over which are [appointed] angels, harsh and severe; they do not disobey Allah in what He commands them but do what they are commanded.”
[6:66]

Why the sabotage on our Ummah’s children? Why start from the tender age of 5? Why the brazen focus on the youth?

Is it to distract our youth from taking the Ummah’s vital issues as their own? Is it to steer them to having athletes, dancers and singers as their role models instead of the Prophet Muhammad (saw) and Salahudin Al-Ayaubi who liberated Palestine from the occupiers? Or having Nusaybah bint Ka’ab who fought in the Uhud battlefield alongside the Prophet (saw) as a role model for our Ummah’s daughters instead of actors?

Having our daughters flaunt their hair and bodies to participate in public sporting events from football to marathons is also an issue that prepares our youth for tomorrow’s secular values. Having some criticize that we as Muslims should not be fanatical in not allowing our girls to participate in sports…that is far the case as Islam does not prohibit sports. What Islam prohibits is the exploitation of girls, men as coaches for girls, men sitting as spectators, girls dressed in non-Islamic attire, competing alongside males…this is completely different from simply girls participating in sports in an environment that does not clash with the Hukm Shari’. Even further this allows the entry point to allow the casting aside of all Islamic values ….making the Great Islam a religion of ritualistic worships in the privacy of their homes if they choose to practice Islam or not. Our boys being influenced into having no shame or protectiveness so as to socialize with girls… all with future severe consequences from the vice that will certainly arise from such haram relationships. We need not to look far as we see and hear of society’s fallout in secular countries.

The Muslim youth of Palestine need to be educated of their surroundings – that they live under the occupation of the Jewish entity with the Palestinian Authority trying vigorously to normalize the idea of the two-state solution and the notion of living side by side with the occupiers in harmony. Our children’s upbringing needs to center around the Islamic creed that Palestine needs liberators like Muhammad al-Fateh, needs thinkers like Imam Shafa’i, needs dawah carriers like Musab (ra). The Muslim youth need to feel agony when the occupier kills the people of Palestine and in Muslim lands; they need to become outraged and not to break out in a dabka while someone recites poetry in the background while the Jewish entity soldiers watch from their armored vehicles!

The Ministry of Education covertly aims to make the Palestine and the Quds issue slowly evaporate from the minds of the upcoming generations to be able to normalize relations with the Zionist occupiers to secularize the society stripping away the Islamic ideals from the younger generations under the various dubious headings starting from the impressionable first graders all the way to senior year high schoolers so they reach the point of looking at matters through the lens of “why not – we only live once”, “we have our individual opinions, no need to restrict us”. These so-called self-freedoms unravel society like a tattered sweater pulling the string that holds the society together that is supposed to be based on the Aqeedah of its population where the gauge is halal and haram and not whims and self-interests.

The minds of our Muslim youth need to be nurtured and stimulated upon the correct foundation of Islam and not placated with devious concepts. The underhanded schemes aka ‘lessons’ from the Western sponsored education curriculum endorsed and strictly enforced by the Palestinian Ministry of Education will ruin our children today and tomorrow if we as parents don’t take a stand on behalf of our children. We need to take a decisive role in making our youth and educators aware of the wider picture aimed at stripping away the ideals of Islam from our children while they sit in their classrooms.

“Indeed, those who like that immorality should be spread [or publicized] among those who have believed will have a painful punishment in this world and the Hereafter. And Allah knows and you do not know.”
[24:19]