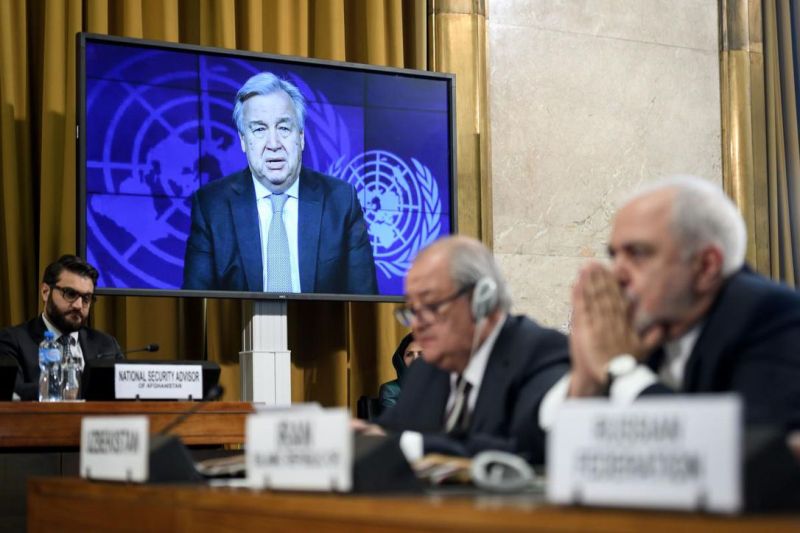 Sweden’s Output: After Years of War, the United Nations Continues to Implement its Scheme in Yemen, under the Criminal States of the Region, and the Foolish Local Rulers, to it they Arbitrate and to its Plans they Submit and then Shamelessly Sing of Sovereignty!!!

After nearly four years of war between the warring parties in Yemen, the war that decimated crops and animals and caused destruction of infrastructure, cessation of basic services, collapse of the economy, spread of epidemics, increasing prices, stirring of sectarian and confessional strife among the people of Yemen, and other countless disasters and crises, the foolish warrior parties whose media and platforms roared of sovereignty at sometimes and of Jihad at others, each claiming that it is on the right in fighting the other, presenting the fight as a sectarian  fighting between the Shiites and the Sunnis, so as to rally the partisans and deceive the people of Yemen in the reality of the fighting.

The worst and the most painful is that each of party twists texts of revelation to agree with its desires and issues politicized fatwas to recruit followers into the incinerator of the crushing war, and the fact is that their war is only a service to the Anglo-American conflict in Yemen. So, after all the deception, trickery and fierce war, they are directing their faces towards the United Nations seeking the solution from it, as if it were a charitable organization working for free, despite the fact that it has a criminal history full of injustice since its inception; Palestine, Bosnia and Herzegovina, Iraq, Somalia and Syria are only examples of its hatred against Muslims and its bias towards the criminals. Was not it established by the Christian countries that are spiteful on Islam and Muslims? And therefore, it is concerned only in the interests of the major colonial powers, especially the United States and Britain, which are leading the conflict in Yemen, stirring it at times and ceasing it at others when they agree on the interests, and so on. Thus, the truth which Hizb ut Tahrir has long been asserting has emerged, showing the reality of the conflict in Yemen, its players and its puppet whether they are international regional or local … And what a loss for the one who kills his Muslim brother for a position and perishable governance and then at the end of his alleged struggle, he surrenders the country to the Kaffir colonialists and their United Nations!

The United Nations works and plans were clear for every person with awareness, where America, as it has the greatest influence and domination in the world today, has used it to serve its interests and put through its agents. In contrast, Britain, with its history and experience with its men from the former regime and its people, tried not to let Yemen come out from the grip of its agents. So, an international conflict of influence and wealth took place, and Yemen was the battlefield. The United States worked through the first envoy, Jamal bin Omar, to give the Houthis access to Sanaa, and then Ould Sheikh completed the plan and saved them repeatedly. And here are the outputs of Sweden on 13/12/2018, where the text before last of the agreement on the city of Hodeidah cited that “The security of the city of Hodeidah and its ports Hodeidah, Salif and Ras Issa, are the responsibility of the local security forces …” in the sense that the city of Hodeidah (the de facto authority) is handed over to the Houthi after the city was just about to fall in the hands of English agents, UAE and its followers… and previously, the progress of the English agents has been halted several times because of the American pressure. These talks focused on Hodeidah because of its economic importance and the interlocutors did not care about the suffering of the people of Yemen due to unpayment of salaries in areas controlled by Houthi, or from the siege such as in Taiz or because of the blood that continues to the day to be shed in the rest of the fronts, for they are greedy capitalists who care only about the areas of wealth, port Hodeidah and Salif and the oil port Ras Isa. This is the plan of America which it implements through the United Nations. During the past period, the United Nations has been the one that is actually fighting the people of Yemen through the economic warfare throughout the previous years of war. The super powers, and in particular America, have taken the UN as a legitimate tool in front of the world to intervene in any country it wants so without it, the currency would not have been printed in an excessive haphazard way, and without it, exporting oil and gas and the operation of ports would not have stopped. It is working to create chaos so that it could intervene and then put through those it wants to the governance.

O People of Iman and Wisdom! Someone might say, why don’t these people want to stop fighting? We say to you that stopping war and fighting between Muslims is a legitimate duty that must be applied and achieved as quickly as possible. We have shown the prohibition of infighting among Muslims over and over again, and we are not with the continuation of these crimes against the people of Yemen. Our hearts break apart in pain for what we see, but the solution is not to make the country a hotbed of the Kaffir colonists and not to inclin toward them and give them power over you, your country and your wealth, that is absolutely Haram, the Almighty said: وَلَن يَجْعَلَ اللَّهُ لِلْكَافِرِينَ عَلَى الْمُؤْمِنِينَ سَبِيلاً “And Allah will never allow an authority to the disbelievers over the believers” [An-Nisa: 141].

Moreover, it is strongly prohibited to refer to the disbelievers in legislation, Allah (swt) says: أَلَمْ تَرَ إِلَى الَّذِينَ يَزْعُمُونَ أَنَّهُمْ آمَنُوا بِمَا أُنزِلَ إِلَيْكَ وَمَا أُنزِلَ مِن قَبْلِكَ يُرِيدُونَ أَن يَتَحَاكَمُوا إِلَى الطَّاغُوتِ وَقَدْ أُمِرُوا أَن يَكْفُرُوا بِهِ وَيُرِيدُ الشَّيْطَانُ أَن يُضِلَّهُمْ ضَلَالاً بَعِيداً “Have you not seen those who claim to have believed in what was revealed to you, [O Muhammad], and what was revealed before you? They wish to refer legislation to Taghut, while they were commanded to reject it; and Satan wishes to lead them far astray. [An-Nisa: 60].

It would have been more appropriate for these conflicting people to lower their wings to each other and to arbitrate Allah’s law which made the believers loving brothers, and commanded to strive to make settlement between them when they fight by returning them to refer to Islam and its provisions in legislation in accordance with the syaing of the Almighty: وَإِن طَائِفَتَانِ مِنَ الْمُؤْمِنِينَ اقْتَتَلُوا فَأَصْلِحُوا بَيْنَهُمَا فَإِن بَغَتْ إِحْدَاهُمَا عَلَى الْأُخْرَىٰ فَقَاتِلُوا الَّتِي تَبْغِي حَتَّىٰ تَفِيءَ إِلَىٰ أَمْرِ اللَّهِ فَإِن فَاءَتْ فَأَصْلِحُوا بَيْنَهُمَا بِالْعَدْلِ وَأَقْسِطُوا إِنَّ اللَّهَ يُحِبُّ الْمُقْسِطِينَ إِنَّمَا الْمُؤْمِنُونَ إِخْوَةٌ فَأَصْلِحُوا بَيْنَ أَخَوَيْكُمْ وَاتَّقُوا اللَّهَ لَعَلَّكُمْ تُرْحَمُونَ “And if two factions among the believers should fight, then make settlement between the two. But if one of them oppresses the other, then fight against the one that oppresses until it returns to the ordinance of Allah. And if it returns, then make settlement between them in justice and act justly. Indeed, Allah loves those who act justly.” [Al-Hujurat: 9].

The verse requires that the one who undertakes reconciliation among Muslims should be from them and not from the Kaffir colonists; however, these parties have been referring to the Taghut for legislation and the wickedness of enmity among them reached the extent of putting the country under the control of the colonists, so woe to them for what they do!

This agreement and the subsequent agreements will not serve the people of Yemen, but will enable the United Nations, led by America and Britain, to sway and influence, and the people of Yemen will only be saddened to see their children guarding the sources of wealth and export ports in service for the Kafir West, and they will only obtain anger from Allah as they are referring legislation to the biggest Taqhuts of the age and leave Allah’s rule and His Shari’a law aside.

O our people in Yemen! You will not be in goodness as long as these foolish conflicting people control your necks. The time has come to quarantine these foolish people and to hold them accountable and stop their hands before the breach has widened. The solution is easy and available for those of understanding: an immediate cessation of fighting, expulsion of Western influence and its agents from the country, and the application of the provisions of Islam in all walks of life by working with the workers to establish the second Khilafah Rashidah (righteous Caliphate) on the method of the Prophethood, a Khilafah of goodness and mercy. So, work for the real change by which you are given victory and honor, and respond to Allah and to His Messenger when He calls you to that which gives you life. The Khilafah Rashidah on the method of the Prophethood is a great obligation and a shield for the believers behind which they are protected from the evils of their enemies. And know that each of the opponents applies ststems that have nothing to do with Islam, such as the republic, democracy, secularism and its man-made laws, and they left nothing for Allah’s Deen except slogans behind which they hide, as if Islam was a project of killing and fighting and has no systems to address the problems of life as a whole. Thus, they distort Islam in the eyes of Muslims and the whole world, whether they know or not. This is a statement from the truthful warner who does not lie to you so take it seriously.