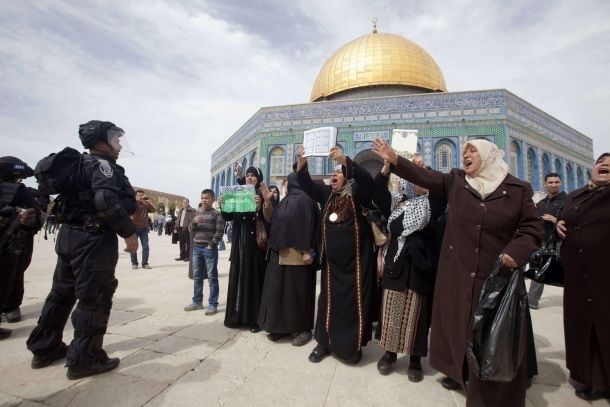 And Destroy the Jewish entity, so is the Regime in Jordan Ready to Respond?

With regards to all the statements and positions of the regime in Jordan and its official and non-official image for several months regarding the so-called Deal of the Century, we outline the following:

Firstly: Ever since the Hashemite family was assigned leadership in Jordan by Britain since its founding in the colonial deal of Sykes-Picot, in which the Caliphate state was divided into puppet states, it has since been following the role assigned to it politically, economically and main role that serve the interests of the permanence and recognition of the Jewish entity, and the relentless pursuit of a two-state solution and the empowerment of firstly the British Western Kafir colonialist. Then the United States of the political decisions and alliance with them in order to serve the plans and interests of these countries to enable their influence and implement their projects and rob their wealth and alliance by the war on Islam and the project of establishing the Caliphate state and those calling for it, under the pretext of the war on “terrorism”, that the regime’s speech at every international forum and official meeting with Western politicians became such a preposterous preamble and boasting of its so-called participation in the war on “terrorism” as justification for its support and to gain support for its existence and stability from the international community. It does not however express a word about terrorism practiced by America, the Jewish entity, Europe, China and Russia, that continue to kill Muslims at every dawn.

Secondly: The American Deal of the Century for settlement, which the regime knows nothing about according to the secretary of state, except for leaks, or American decisions such as the transfer of the embassy to Jerusalem and the recognition of the Golan as part of the Jewish entity or the annexation of settlements in the West Bank, all came after the crime of the twentieth century, which is worse than all previous atrocities on the Ummah, which is still living its woes through the ruling regimes planted by the demons of the Western infidel colonizer and imposed with iron-fist on the necks of people, so indeed this deal would not have been established hadn’t that crime been committed. So what scares and angers the regime? Is it the exclusion of its role and connection with the cause, that is, the tutelage of the 144 dunum (hectare( only – after it gave them up in conspiracies of surrender and shame – under the sword of Jews in the new settlement? Or is it a diminution of its role in the region and emptying it of its powers at home in its sense of movements working behind what it called “suspicious agendas” as it put it, without specifying what the agendas are? Or are they justifications for absolving the responsibility and impotence of the American pressure when the hour of execution of the deal comes?

Thirdly: The current situation that the regime wants to preserve until the two states solution and the outstanding issues such as Jerusalem, refugees and borders are resolved is a solution based on law and international legitimacy, and when it justifies its rejection of the American resolutions on Jerusalem and the Golan as violating international law, it does not justify this for the sake of the Ummah and in its defense, but is defending its existence and survival by its colonial subordination and its role in the international community. When were international laws, the Security Council and the United Nations a concern for America when it occupied Iraq and Afghanistan? Or when it killed and still kills the unarmed Muslims with drone aircrafts in these countries and in Syria a few days ago and in other countries where it is killing without any monitor or account? And when it disrupted dozens of resolutions of international legitimacy condemning the Jewish entity? Then what would the regime do when it recognizes and participates in the Arab regimes’ initiative to resolve and conclude the Wadi Araba Agreement to establish a Jewish entity? And even deals with humiliating intimate deals with it like the stolen gas agreement. Nevertheless, the Jewish entity seems to not care about its relations with the regime in Jordan except for its existence and survival against the American interests deal, despite the intimate twinning with it since its existence and its security, political and economic empowerment, and has indeed made Jordan its entrance in the Arab world.

Fourthly: The Ummah is the natural basis of the ruling regime when this system derives its legitimacy from the Ummah, who has the authority to choose her ruler, and the Ummah will then support it in dilemmas and implications and the ruler would not need to demand it to stand with him in the position of popular support, but the regimes that derive legitimacy from the colonialist enemy of the Ummah, the Ummah is never expected to support it; rather, the Ummah is working and wishing for the day when it recovers its rapacious power. These regimes are not from the Ummah and do not look at its demands, feelings and aspirations. The Ummah does not want, nor has it ever wanted, the Jewish entity and its recognition or deal with it except through the state of actual war. It does not want America, Britain or Europe, nor any relations with them, or their influence or bases, nor their malignant secular institutions, which undermine the rule of their Lord and creed of inheritance and equality, and spread what angers their Lord of homosexuality and Riba. The Ummah goes beyond what the regime thinks in defending its Deen, sanctities, land and wealth, for the Ummah and its armies are eager to fight the Jewish entity and return al-Aqsa, Haifa and Lod, that are all the same to Allah and to it, and martyrdom for that sake is its highest aspirations, as it longs to expel colonial countries and their influence from our lands.

We in Hizb ut Tahrir invite you, as we have invited you many decades ago, to make your actions, your positions and your struggles for the sake of Allah and in accordance with the rulings of Allah, to receive the great reward from Allah. Let your awareness be that your fateful cause is the restoration of the Khilafah Rashidah on the method of the Prophet, as it is the crown of all obligations that mobilises the armies for Jihad and restores your dignity and honour, which your rulers have lost, those rulers who were imposed upon you by your colonial kaffir enemies, and you had no choice in choosing them, as they are the oppressive rule mentioned by the Messenger of Allah ﷺ in the long Hadith: «… ثُمَّ تَكُونُ مُلْكًا جَبْرِيَّةً، فَتَكُونُ مَا شَاءَ اللَّهُ أَنْ تَكُونَ، ثُمَّ يَرْفَعُهَا إِذَا شَاءَ أَنْ يَرْفَعَهَا، ثُمَّ تَكُونُ خِلاَفَةٌ عَلَى مِنْهَاجِ النُّبُوَّةٍ. ثُمَّ سَكَتَ» “…Afterwards, there will be biting oppression, and it will last for as long as Allah wishes, then He will lift it if He wishes. Then there will be a Khilafah Rashida [Guided Caliphs] according to the ways of the Prophethood.” Then he kept silent.”