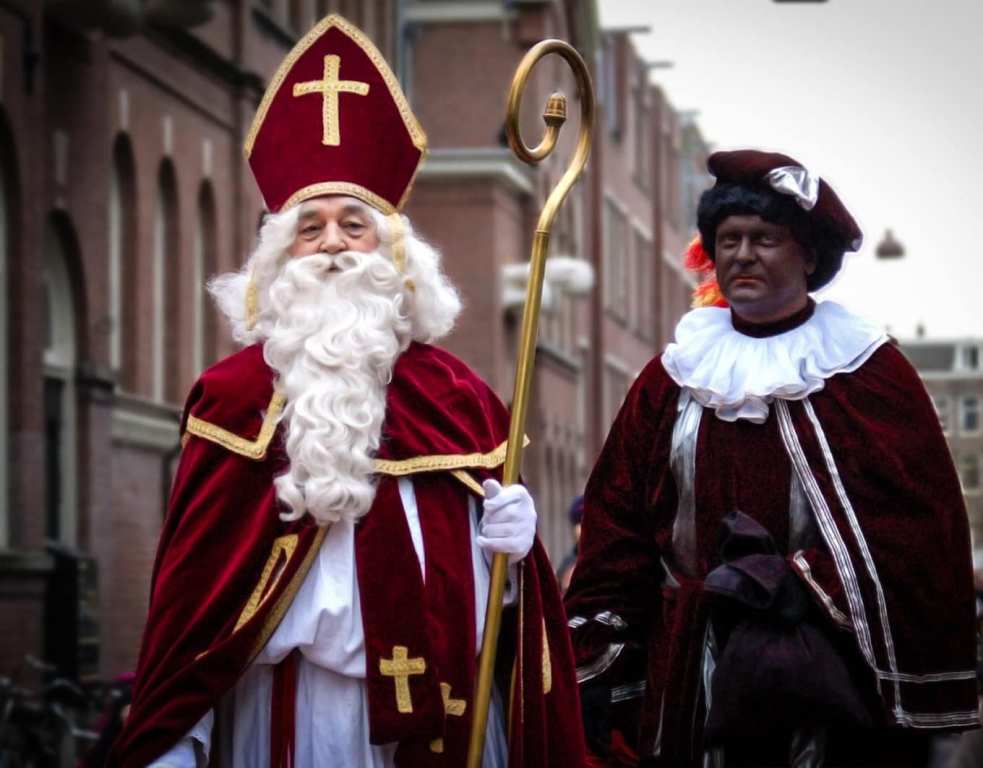 AMSTERDAM (Reuters) – Anti-racism campaigners held protests in cities across the Netherlands on Saturday as Dutch children hailed the annual arrival of St. Nicholas and a blackface character who traditionally accompanies him.

Every year around November the ugly face of racism rises at its peak in the Netherlands with the arrival of “Sinterklaas”, a Dutch tradition where (Saint Nicolas) an elderly white man sets ashore with his steamboat, accompanied by his white horse and hundreds of dressed up helpers, whose faces are painted black, with large red lips, wearing a curly black wig and large gold earrings, their name: Zwarte Piet (Black Pete).

The last 8 years this festive happening has been accompanied by protests who claim that Black Pete is a racist phenomenon, something that needs to change.

The first sounds of protest against this Dutch tradition started in the sixties, with a notion of a “white Peteplan” which was published in a national Dutch magazine (panorama). Mrs M.C. Grunbauer the initiator of the plan thought it was no longer justifiable to continue to celebrate this Dutch tradition in its current form. She explained that: “While slavery has been abolished for more than a century, we keep dabbling with the old tradition of presenting the Negro as a slave…..” While the mighty White Master sits on his white horse or on his throne, Black Pete have to walk and carry heavy bags and sit at the feet of their master… And 50 years later the discussion is still as explosive as ever.

A new wave of protest under the name of “The anti-Black Pete movement” which started in 2011 seems to have opened Pandoras box and has exposed once again a deeply rooted dark side of Dutch society.

Just last week police arrested four people in The Hague after they stormed a building where anti-Black Pete activists were gathered, smashing windows and throwing fireworks in to the building which could have set it alight. Also whilst demonstrating against Black Pete, protesters have been subjected to racist slurs, had bananas and eggs thrown at them and have also been greeted with the Hitler salute.

The opposition towards changing the appearance of Black Pete has, to say the least, been severe. Many people support Black Pete, and a majority of the country is resistant to changing the tradition. A recent opinion poll showed that 59% of all Dutch wanted to keep the “Black Pete” with a blackface, while 26% said the tradition needed to be changed gradually.

They argue that Black Pete is only Black because he comes down the Chimney to put gifts in the shoes of children. How their hair becomes curly and why they have red lips remains however a mystery. They also argue that it is a Dutch tradition, something sacred and not to be tampered with. “It’s just an innocent children’s party” is another used argument. Not taking in to consideration what a “coloured child” feels like when confronted with Black Pete or when called “Black Pete”.

It’s especially the adults who seem unwilling to make changes to their own positive childhood memories.

You might ask yourself what the role of the Dutch government has been. Well a controversial statement made by the Dutch Prime Minister in 2014 was: “Black Pete is black and I cannot change that because his name is Black Pete.”

“It is not green Pete, or brown Pete, it is Black Pete … I can only say that my friends in the Dutch Antilles (a former Dutch colony) are very happy when they have Sinterklaas because they don’t have to paint their faces, and when I am playing Black Pete I am for days trying to get the stuff off my face.”

He also said that: “Black Pete is not a state affair,” “Beware of a country where the state determines what a tradition looks like. That seems to me really something for the people and not for politics.”

While the Prime Minister doesn’t feel obliged to take heed of the situation the United Nations has repeatedly called for any racist features to be eradicated from the pre-Christmas festivities, which as usual falls on deaf ears.

Whether Black Pete originates from slavery or not, what clear is that it is a tradition that is causing much friction within Dutch society and it leaves a large group of citizens feeling humiliated, hurt and excluded. Also the way native Dutch citizens are reacting to this the protests clearly is very racist. But the stance of the prime minister is what is most shocking, claiming it isn’t a problem that needs to be addressed in a political manner.

How different would Islam deal with such a problem when implemented correctly and completely.

It was of the highest priority of the Prophet when he became the head state of Madinah to create a society of harmony. An example of this is when he paired the Muhajireen (immigrants) from Makkah to the (locals) the Ansar. They were encouraged to share their wealth and to do everything they could to make the (newcomers) Makkans feel welcomed. Not only did he declare the believers, brothers of each other. He ordered respect towards other communities such as the Jewish tribes.

Minorities were protected the Messenger of Allah ﷺ said: «أَلَا مَنْ ظَلَمَ مُعَاهِدًا، أَوِ انْتَقَصَهُ، أَوْ كَلَّفَهُ فَوْقَ طَاقَتِهِ، أَوْ أَخَذَ مِنْهُ شَيْئًا بِغَيْرِ طِيبِ نَفْسٍ، فَأَنَا حَجِيجُهُ يَوْمَ الْقِيَامَةِ» “Indeed whoever oppressed a Mu’ahid (non-Muslim migrant), or degraded him, or overburdened him, or took something from him forcefully, then I am in dispute with him (the oppressor) on the Day of Judgement” [Sunan Abi Dawood, narrated by Abu Sa’eed Al-Khudri, radhiya Allahu ‘anhu].

Even though the West would like you to think otherwise about Islam, they cannot deny factual historical evidence of how the Aqeedah of Islam influenced the harmony within society. The Ottoman Islamic State for example managed to successfully sustain minorities and closer to home the people under the Islamic rule in Spain lived in harmony with each.

Sadly after the destruction of the Khilafah, the Islamic world once again became infected with pre-Islamic concepts such has nationalism and patriotism which has led to a return of racism.

There can be no better ending and reminder than the following words of our beloved Prophet ﷺ: